Researchers at the Semel Institute for Neuroscience and Human Behavior at UCLA have found that a social skills program for high – functioning young adults with autism spectrum disorder significantly improved the participants’ ability to engage with their peers.

In the study, the largest randomized controlled trial to show improved social functioning in young adults with autism, the participants’ advances continued to be seen 16 weeks after the program’s conclusion, and were even augmented by other improvements such as increased empathy and greater responsibility.

The study (PDF), which builds on previous findings showing the effectiveness of UCLA’s Program for the Education and Enrichment of Relational Skills, or PEERS, appears in a special issue of the online Journal of Autism and Developmental Disorders. 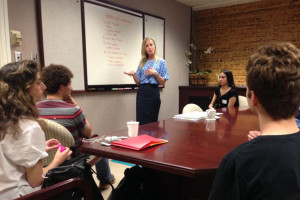 “There is still a misconception that autism is a childhood disorder,” said Elizabeth Laugeson, the founder and director of the UCLA PEERS Clinic, an assistant clinical professor of psychiatry at the UCLA Semel Institute and the study’s principal investigator. “It’s as if we’ve forgotten that these children grow up to be adults with their own unique challenges that very often affect their ability to be gainfully employed or establish meaningful friendships and romantic relationships.

“Our study offers encouraging findings that, through an evidence-based, caregiver-supported intervention, adults with autism can improve in ways that may help them be more successful in these aspects of their lives.”

Autism affects approximately 1.5 million people in the U.S., and the number of young adults identified with the disorder is rising every year. Although individuals of all ages on the autism spectrum struggle as a result of social deficits, most interventions target young children; few programs are available to help young adults improve their social functioning.

Laugeson and her colleagues, including Dr. Fred Frankel, a UCLA professor of psychiatry, developed PEERS at UCLA in 2005 and it has since expanded to other sites in the U.S. and other countries. The PEERS for Young Adults intervention consists of 16 weekly 90-minute sessions, along with concurrent sessions for caregivers.

“We’re not teaching what we think young people should do in social situations, but what we know actually works through research,” Laugeson said.

As an example, when young people with autism who are struggling socially are trying to meet a new group of people, they are often advised to go up and introduce themselves – a strategy that can come across as awkward.

“We have found that when we break this sophisticated social behavior down into its concrete parts, young adults with autism can easily learn to follow the steps,” Laugeson said.

In the study, 22 people aged 18 to 24 and their caregivers were randomly assigned either to receive the PEERS treatment or to be part of a control group in which treatment was delayed. Those in the PEERS group received training on social etiquette related to conversational skills, humor, electronic communication, identifying sources of friends, entering and exiting conversations, organizing successful get-togethers, and handling peer conflict and peer rejection. The young adults in the PEERS group also received four sessions on dating etiquette.

The PEERS approach teaches skills using concrete rules and steps of social behavior via lessons, role-play demonstrations, behavioral rehearsal exercises and assignments to practice the skills in natural social settings. Caregivers (including parents and other family members, job and life coaches, and peer mentors) are also provided tips to help participants use their skills in the real world.

In addition, 16 weeks after the treatment ended, most of the gains were still evident, and the researchers observed new improvements in social communication, assertion, responsibility and empathy — a result the scientists attributed to the involvement of caregivers as social coaches.

In 2012, Laugeson and colleagues reported similar improvements in social skills in a study focusing on adolescents with autism.

The researchers plan to share the findings with the autism community later this year through the publication of the PEERS for Young Adults Manual, the first evidence-based social skills program for adults on the autism spectrum. The PEERS Clinic already has published a similar manual for parents of teens and young adults.

The new study was funded by the Organization for Autism Research and the National Institutes of Health. Laugeson and her co-authors receive royalties from the sales of the two treatment manuals for teens and the parent book.