Most of the innovative drugs with important therapeutic benefits are not approved or are removed from the clinical practice due to drug-induced toxicity. The kidneys are one of the most important target organs of drug toxicity because they play a crucial role in drug excretion and drug metabolism. More specifically, the proximal tubule, which is a portion of the nephrons of the kidney, is very sensitive to any drug insult because it reabsorbs and secretes drugs and metabolites, meaning that it is continuously exposed to high concentrations of toxins. Despite the relevance of drug-induce renal injury, there are no useful biomarkers to detect early renal damage nor therapies to treat the renal damage. This can be explained, at least in part, by the lack of appropriate animal models that mimic the human renal pathophysiology. Zebrafish (Danio rerio) present unique advantages for assessing drug-induced renal injury when compared with other animals used in biomedical research: small size, transparency, rapid development, transgenic capabilities, low cost and high homology between the zebrafish and human renal physiology. 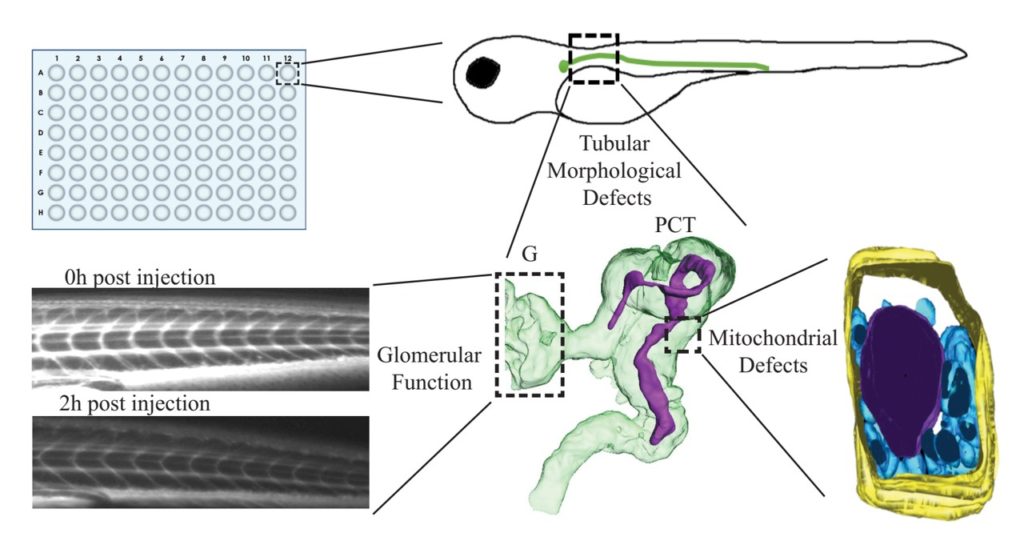 Fig. 1. Morphological and functional assessment of drug-induced renal damage. Zebrafish larvae were exposed to nephrotoxic drugs in 96-well plates. The sketch of a zebrafish larva shows the kidney in green with the proximal tubule limited by a square. Morphological damage was quantified from the 3D reconstruction of the proximal tubule, which shows the lumen in purple, and the 3D reconstruction of the tubular cell, which shows the mitochondria in blue. Glomerular filtration was quantified from the decay in the fluorescence of the tail blood after intravenous injection of fluorescent inulin.
PCT, proximal convoluted tubule; G, glomeruli.

In this work, we aimed to investigate the potential of zebrafish larvae as a model of drug-induced renal injury through a detailed analysis of the functional and morphological renal alterations induced by three drugs that are widely used and known to cause renal tubular toxicity in humans: gentamicin, paracetamol and tenofovir (Fig. 1).

We exposed zebrafish larvae of 4 days post fertilization to each of the drugs separately in a concentration that was lethal for 10% of the larvae. After 24 hours of drug exposure, we evaluated the renal function and the tubular morphology using different imaging techniques. Renal function was assessed with intravenous injection of fluorescent inulin, a polysaccharide that is exclusively eliminated from the body through the kidney by glomerular filtration. Gentamicin and paracetamol proved to decrease the renal function. The morphology of the proximal tubules was evaluated with two-photon microscopy followed by 3-D reconstruction of the proximal tubules to quantify the diameter of the tubules. Paracetamol and tenofovir induced an enlargement of the tubules, which is an early sign of tubular dysfunction. A deeper morphological analysis, at the cellular level, was performed by transmission electron microscopy followed by 3-D modelling. Tubular mitochondria, cellular organelles that play crucial roles such as energy production, were severely affected by all drugs.

These results confirm that zebrafish and human nephrons react in a similar way to nephrotoxic drugs. Thus, zebrafish larvae are a useful model to assess potential renal toxicity of new drugs before being used in humans.