Zinc – a promising supplement for the immune system

Zinc is essential for basic functions within cells of the human body. Hence, zinc deficiency is associated with impaired immune functions as dermatitis, dysfunction of the immune system, hypogonadism, and growth retardation. Under normal conditions only low amounts of zinc within the blood exist, emphasizing its role as a trace element. There is no existing zinc storage system as for example for iron. Thus, a steady state intake and excretion is of high importance. Among foods, zinc concentrations vary considerably. The highest amount of zinc is found in oysters and in general the most important dietary source of zinc is meat and fish. 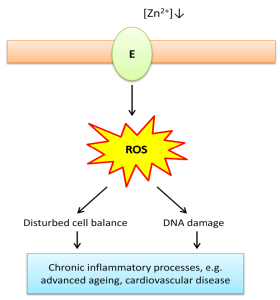 Fig. 1. Under conditions of zinc deficiency ROS-producing enzymes (E) are not inhibited leading to elevated ROS formation and consequently damage to the cell.

Zinc uptake from cereals/legumes is inhibited by substances which are found in plant-based foods. This is especially important to know for vegetarians and people from the developing world since they are mainly dependent on those foods and therefore are especially prone to zinc deficiency.
A special species of molecules, so-called “ROS” (reactive oxygen species) which are mostly free radicals, are normally produced within a cell as byproducts. ROS can be dangerous for the cell if the amount is increasing and the mechanisms to clear ROS are not working. Elevated ROS cause oxidative damage within the cell and consequently lead to the development of different diseases. However, ROS production is an elemental process of cellular respiration. If the cell metabolism is in balance no difficulties from ROS and no severe cell damages can be expected. Thus, the balance of all substances within the cell is of high importance.
Interestingly, zinc deficiency is associated with oxidative stress, assuming a possible positive role of zinc supplementation. In fact, zinc supplementation is associated with decreased ROS formation, showing beneficial effects especially in ageing and diabetes mellitus. In detail, zinc is able to inhibit different ROS-producing enzymes thus leading to reduced ROS concentrations (Fig. 1). Furthermore, zinc binds to particular sites within enzymes and proteins and is therefore able to prevent harmful modifications to the enzyme/protein leading to its inactivation under conditions of zinc deficiency (Fig. 2). 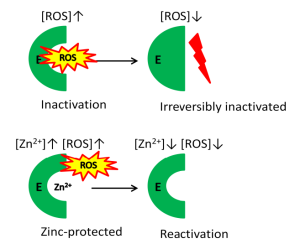 Fig. 2. ROS causes irreversible damage to particular groups within the enzyme (E). In the presence of zinc the irreversible inactivation is prevented and it is possible to reactivate the enzyme.

In the elderly, impaired zinc homeostasis is associated with increased levels of oxidative stress and the induction of intracellular changes, inducing cardiovascular diseases, especially atherosclerosis. The process of ageing is accompanied by the accumulation of cellular damage and an increase of oxidative stress. Another possibly zinc-affected disease is diabetes mellitus. Manifestation of oxidative stress in patients affected by diabetes mellitus type II might as well be associated with changes in zinc metabolism. The effects of zinc on this type of diabetes might lead to its beneficial use in the treatment of ROS-induced cell damage.
To sum up, zinc positively influences ROS production thereby protecting the cell against harmful damages. The analysis of the zinc status in humans might be useful to assess the status of oxidative stress, serving as a potential predictor in the development of different ROS-dependent diseases.

Zinc as a micronutrient and its preventive role of oxidative damage in cells.
Kloubert V, Rink L
Food Funct. 2015 Oct 7