Skeletal muscle is a heterogeneous, dynamic and plastic tissue, which comprises 40% of adult human body mass. Through contraction and relaxation, skeletal muscles provide movement and stability to the body. Besides the mechanical function, muscle tissue also contributes to metabolism as a reservoir of amino acids, carbohydrates and essential elements such as zinc or calcium. Alterations in muscle mass are related to disease conditions such as obesity and diabetes. In normal conditions, muscle possess a remarkable regeneration capacity. However, certain injuries, such as the loss of big portions of tissue, or degenerative disorders affect muscle self-regeneration.

After muscle injury, the stem cells of the skeletal muscle, satellite cells, activate and start to replicate and develop into myoblasts. After that, myoblast fuse together originating differentiated multinucleated myotubes (Fig. 1). 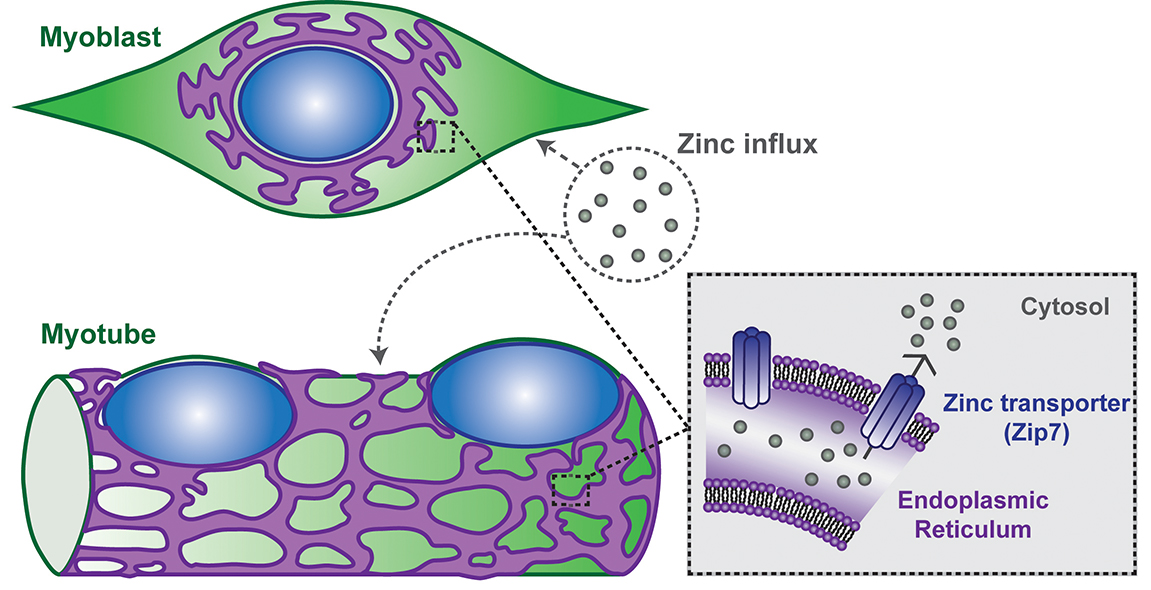 Traditionally, growth factors, powerful molecules used by cells to transmit signals, are used to stimulate muscle regeneration. However, their use at high doses for the treatment of some diseases involve serious off-target effects. They can affect other cells and tissues, altering cell homeostasis and promoting the development of cancer. In this work, we have studied the role of zinc triggering myogenic differentiation as an alternative to the use of high doses of growth factors. Previous researches have demonstrated that zinc is important in muscle tissues, increasing myoblasts proliferation and acting as a secondary messenger inside the cells. Thus, extracellular signals are able to activate transient variation of the intracellular concentration of zinc. These gradients of zinc concentration alter the activity of certain molecular switches, such as protein kinases. One of the most important kinases activated by zinc and at the same time necessary for muscle regeneration is Akt. However, how zinc signalling influences muscle regeneration was not completely understood.

In this work, we show that zinc promotes myoblast proliferation, differentiation and maturation of myotubes. We observed that myoblasts exposed to zinc, show higher ratio of fusion, leading to multinucleated cells, and thicker myotubes.  We also observed a direct relationship between myogenic differentiation and zinc management by the cells. Differentiated myotubes resist better to high concentrations of zinc (compared to non-differentiated myoblasts), and showed higher concentrations of intracellular zinc. Moreover, mature myotubes, obtained after stimulation with high concentrations of zinc, accumulate zinc and so we hypothesise their function as zinc reservoirs into the cell.

After that, we studied the role of zinc transporter Zip7 in the observed zinc-mediated effects. This transporter canalize zinc from intracellular storages to the cytosol. While in mononucleated myoblasts the presence of Zip7 was around nuclei, in multinucleated myotubes the distribution of Zip7 was along the myotube, following the same distribution that endoplasmic reticulum in myoblasts and the sarcoplasmic reticulum in myotubes (Fig. 1).

Our investigation demonstrated that the enhanced myogenic differentiation triggered by zinc occurs through the Akt signalling pathway, via zinc stimulation of transporter Zip7 (Fig. 2). 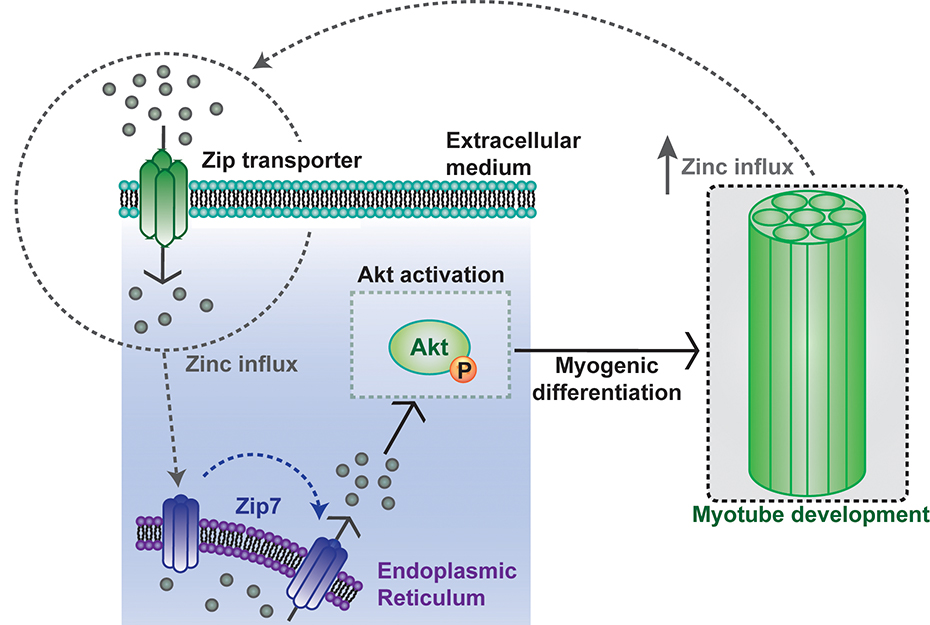 To demonstrate the relevance of zinc transporter Zip7, we reduced Zip7 expression by RNA interference, hindering the synthesis of new Zip7 proteins. Consequently, we observed a significant reduction of both Akt signalling and myogenic differentiation, as well as reduced ratio of multinucleated cells, and thus demonstrating the role of Zip7 protein in zinc-mediated induction of myoblast differentiation and myotube maturation.

We propose zinc as an active element to stimulate muscle regeneration as an alternative of the use of growth factors.