ZNRF1: a key molecule activated by reactive oxygen species to cause neuronal degeneration

Neurons, the major component of our brain, have long processes (called “axons” and “dendrites”) to communicate with other neurons and cells. In many brain diseases that old people get suffered from, such as Alzheimer’s disease, Parkinson’s disease, and Lou Gehrig’s disease (amyotrophic lateral sclerosis), those neuronal processes gradually get shrunken and neurons eventually die during the course of the diseases. The neuronal decay by the diseases causes functional loss of brain and spinal cord.

A large number of researches performed back in 1990’s revealed that cell death requires enzymatic reactions inside of the cells to actively kill the cell (in other words, to suicide). The initial series of researches to show the mechanism of the cell’s suicide were awarded by Novel prize in physiology and medicine in 2002. On the other hand, mechanism for degradation of neuronal processes, which usually precedes the death of neurons in many neurological diseases, has not been well characterized till recently; while it has been reported that typical axonal degeneration requires signaling independent from that for cell death, the detailed signaling mechanism has not been well understood. 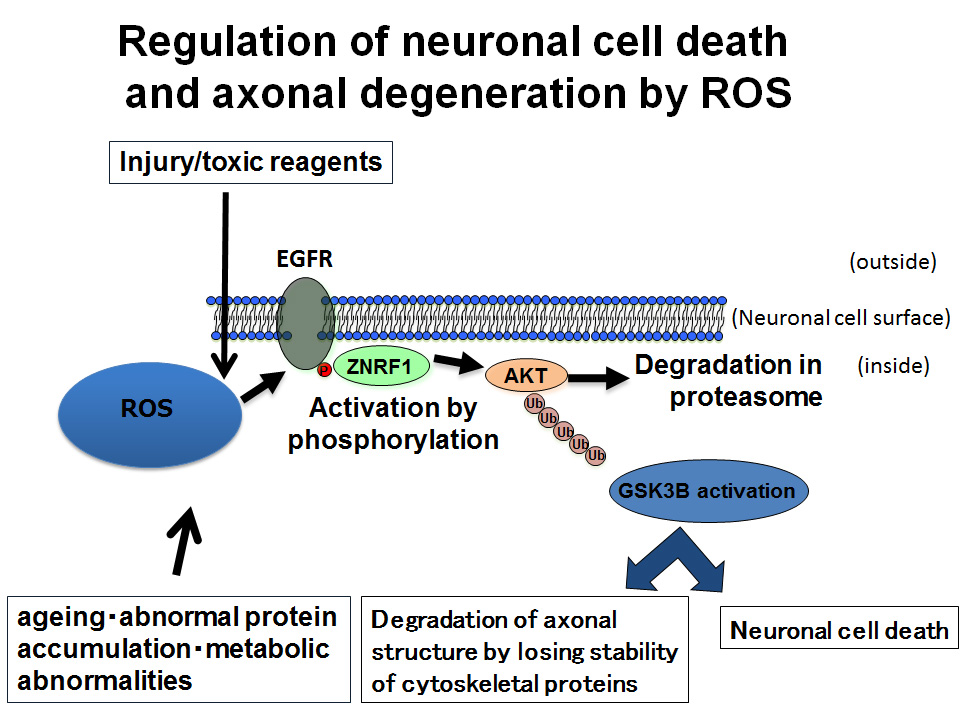 Our research group reported in 2011 that axonal injury induces changes in neuronal signaling for regulation of stability of “microtubules”, a major axonal structural component in neurons, and thereby promotes axonal degradation. In this mechanism, a protein termed “ZNRF1” targets a signaling molecule termed “AKT” for degradation to initiate axonal degeneration after injury. ZNRF1 is a protein which is present in almost all neurons throughout the body, but it usually seems inactive, until invasive stimuli come to neurons, which somehow activates ZNRF1. Therefore, to elucidate the mechanism for ZNRF1 activation has been regarded as an important next step to understand “why neuronal processes degrade in neuronal diseases”.

In our recent report, appeared in Journal of Cell Biology, we showed that reactive oxygen species (ROS; a.k.a., oxidative stress, or superoxide), serves as a signaling factor in neurons to activate ZNRF1, and that activation of ZNRF1 induces both neuronal cell death and axonal degradation, by using animal models of brain stroke, Parkinson’s disease, and traumatic nerve injury. Our data demonstrated that injury or stress given to neurons induces ROS generation in close proximity to ZNRF1. ROS then induces phosphorylation of ZNRF1 by an enzyme termed “epidermal growth factor receptor (EGFR)” and thereby activates ZNRF1. ROS is a molecule which has widely been known to be generated by respiration and metabolism in the body and accelerates ageing by modifying a variety of biomolecules that constitutes our body. Our current research results showed, for the first time, ROS has a role to transmit signals in neuronal cells. Furthermore, as explained above, while it has been thought that neuronal cell death and axonal degradation are under independent regulation, our data showed, by using a mouse model of Parkinson’s disease, that inhibition of ZNRF1 function prevents both neuronal cell death and axonal degradation. This result suggests that ROS-induced activation ZNRF1 can initiate both cell death and axonal degradation. We hope that development of drugs that prevent ZNRF1 function in the future may be able to help ease symptoms and/or prevent progression of various brain diseases.