Exercise can cause a wide number of things to happen within our body. Our heart rate increases, our blood vessels dilate, we oxidise more fat and carbohydrate, and we can actively stimulate the repair of our own tissues through mobilising stem/progenitor cells, and other cells in our bodies which possess similar functions. Our recent research has shown that a single 10km run in 18-40yr old healthy males increases the number of circulating cells in the blood which have been previously shown to stimulate the repair and regeneration of cells lining our blood vessels. The study measured blood samples taken before a 10km running time trial (undertaken in Edinburgh Napier University’s Human Performance Laboratory), immediately after, and one hour after exercise cessation. 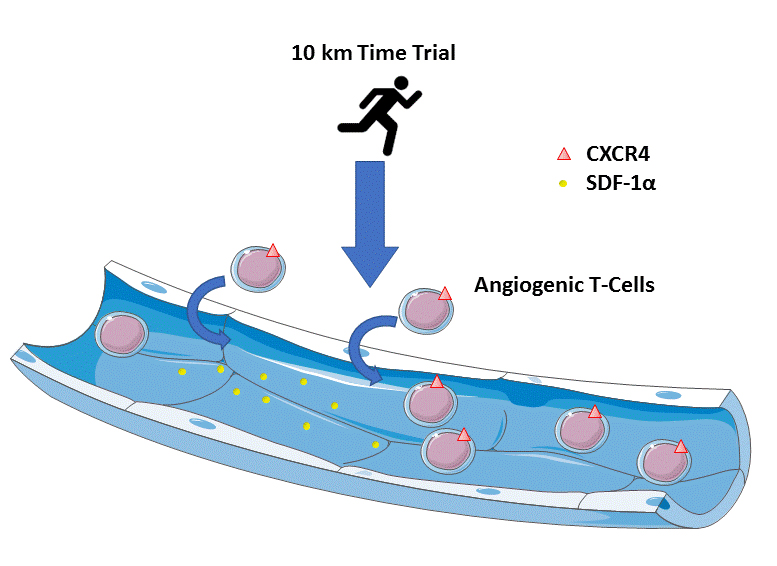 Using a method called flow cytometry, we were able to identify a sub-population of circulating cells expressing surface markers that take part in vascular repair. These cells increased in the runners’ circulation by over 100%, due to increased expression of a cell surface antigen, CXCR4, which is involved in cell migration to a ligand known as SDF-1, which we also found to be significantly increased in the circulation due to exercise. However, by one hour post-exercise, these levels returned to normal, suggesting that these cells actively migrate away from the blood to tissues requiring their effector functions, such as promoting blood vessel growth in ischaemic tissue.

The cells in question, termed ‘angiogenic’ T-cells, or TANG for short, were recently shown to possess potent abilities to stimulate blood vessel growth and repair by targeting cells called endothelial cells, causing them to proliferate. These cells function by migrating to ischaemic tissue, and releasing factors known as cytokines and growth factors, such as vascular endothelial growth factor (VEGF), which then act upon these endothelial cells causing them to divide and multiply, therefore promoting vessel growth and repair. These cells offer potential therapeutic benefits, and may also play a very important role in exercise-induced cardiovascular adaptations, and also one way in which exercise may prevent the onset and/or progression of cardiovascular disease.