Syphilis is a sexually transmitted disease caused by Treponema pallidum, a bacterium of the order of spirochetes, with human beings as the only host. Recently, the drastic increase in the incidence of syphilis worldwide, especially in urban areas, led clinicians to heighten their degree of suspicion, with special regard to the presence of this infection within the HIV populations, intravenous drugs users and homosexuals. New studies may be helpful in diagnosing and managing syphilis in both its early and delayed clinical manifestations. 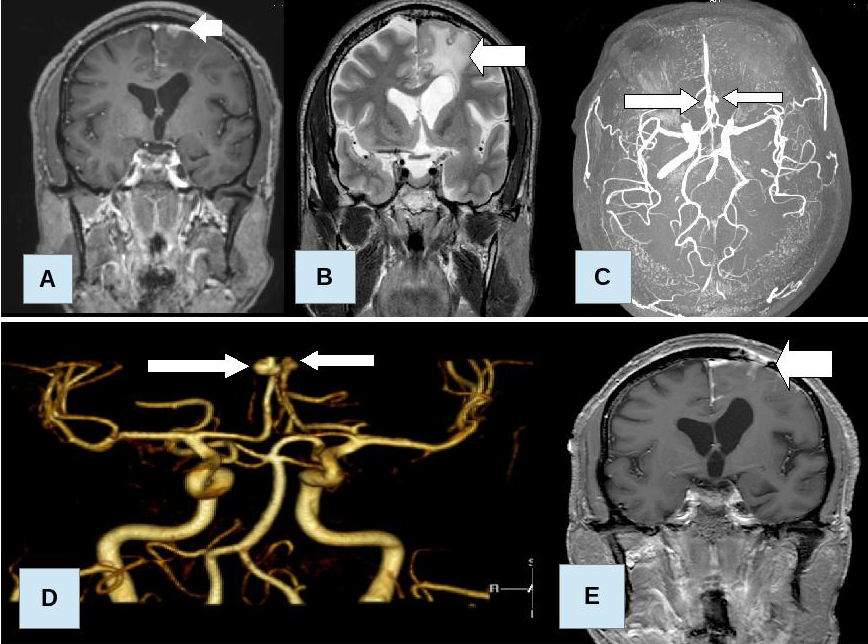 Fig. 1. A and B – T1 weighted coronal MRI (after contrast) and T2 weighted coronal MRI (without contrast) showing a left fronto-parasagittal lesion surrounded by an edematous interemispheric area. Both in the cortical and subcortical areas, a marked hyperintensity on T2-weighted sequences can be appreciated (B). After contrast, it is possible to notice marked leptomeningeal enhancement in the left frontal and interemispheric regions (A). C and D – MRA and MRA-3D Reconstruction showing 2 aneurysms of distal A2 segment of both ACAs. The right-sided aneurysm is about 5 mm in diameter, while the left-sided aneurysm measures approximately 3 mm in diamater and is located in the terminal part of A2 hypoplastic ipsilateral segment. E – T1 weighted coronal MRI (after contrast) performed after biopsy, showing signs of previous surgery, with left frontal craniotomy and an underlying cavity. In respect to the previous neuroimaging investigations, the absence of frontal cortical swelling is evidenced. After contrast, the leptomeningeal enhancement persists, extending along the frontal and interemispheric areas.

We report the case of a 41 years old African man who came under our observation because of the worsening of an initially undertreated headache, whose first appearance was traced by the patient about 10 years ago. Clinical examination showed the presence of mildly depressed mood, left temporal region pain and tinnitus. Brain CT/MRI showed an ambiguous left frontal lesion (Fig. 1., A-B) and a MR-angiography (MRA) revealed two aneurysms occurring at both anterior cerebral arteries (ACAs) (Fig. 1., C-D). Microbiological and histopathological data proved consistent with the hypothesis of meningovascular syphilis (Fig. 2., A-F). The patient was treated with antibiotic therapy. Follow-up at 4 months did show a stable clinical picture.

Treponema pallidum typically invades the central nervous system in secondary and later stages of syphilitic  infection. Neurosyphilis can manifest through a broad spectrum of clinical features; among those, meningovascular (arteritic) syphilis represents a reasonable hypothesis in our case: it occurs, on average, 7 years after the initial infection and its pathological features consist of endarteritis with perivascular inflammation of both medium and small-calibre vessels (Heubner and  Nissl-Alzheimer-type, respectively). The subsequent luminal narrowing predisposes to cerebrovascular thrombosis, ischemia, vessel occlusion and infarction. This explains why the most common presentation of meningovascular syphilis is a stroke syndrome involving the middle cerebral artery (most common) or the branches of the basilar artery (second most common). A subacute encephalitic prodrome is present, characterized by the presence of headaches, vertigo, insomnia, and psychological abnormalities such as personality change, emotional lability, insomnia, decreased memory. 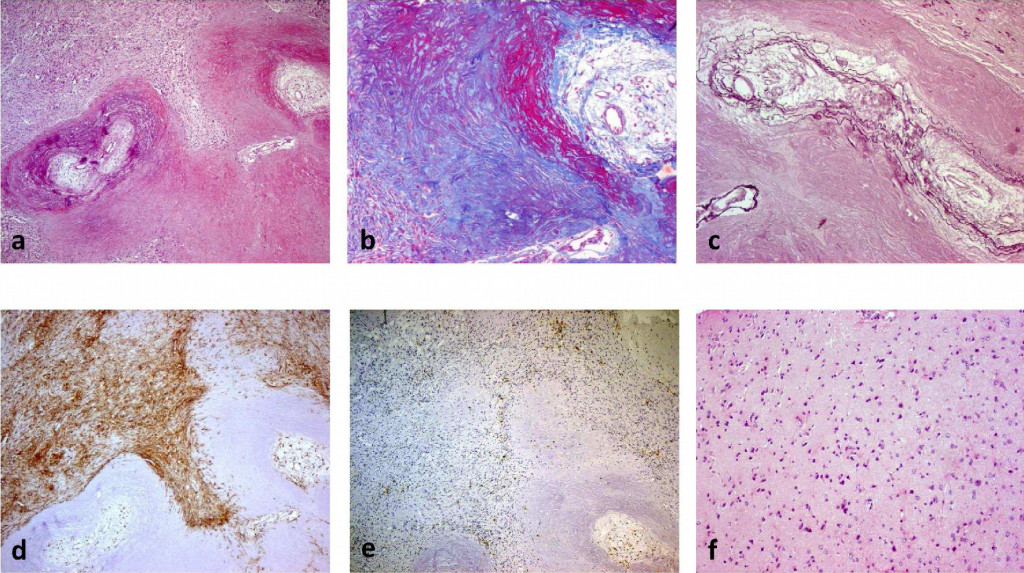 Fig. 2. A-F – Histochemical and immunohistochemical findings. Thickened fibrotic meninges with confluent areas of necrosis and obliterated vessels surrounded by inflammatory infiltrate (A: H&E stain, original magnification 4x); marked fibrous parietal thickening and significant luminal narrowing of affected vessels (B: Masson’s Trichrome, 10x); distorted elastic fibers within the arterial wall (C: Weigert stain, 10x); abundant perivascular macrophagic/histiocytic (D: stain against CD68 antibody, 10x) and lymphocytic inflammatory infiltrate (E: LCA immunostaining, 10x); adjacent cortical laminar disorganisation and reactive gliosis (F: H&E, 10x). Bioptic specimens were consistent with chronic inflammatory process of predominantly meningovascular involvement and were compatible with serological data indicating neurosyphilis. N.B. Results of laboratory tests: blood serum sample tested positive for Treponema pallidum hemagglutination (TPHA) (1:80). The Fluorescent Treponemal Antibody Absorption (FTA-ABS) test showed a minimal degree of reactivity (1+) and total anti-treponemal antibodies (I.C.=16) were detected; antitreponemal IgM were negative. Total protein levels in CSF were high (66.8mg/dL). Then, the patient underwent new serological tests that confirmed the presence of total anti-treponemal antibodies (I.C. ranging from 6.2 to 8.9). TPHA proved positive again (1:5120) and VDRL (Venereal Disease Research Laboratory) test was weakly reactive. While awaiting the results of new laboratory studies of blood and CSF, we consulted an infectivologist that recommended oral antibiotic therapy with amoxicillin, possibly followed by specific anti-treponemal therapy with intravenous penicillin 20 MU/day for two weeks, depending on the outcome of the aforesaid microbiological investigations. CSF testing showed a cytometry of about 0.3 L/mm3 and substantial negativity of other parameters (TPHA, FTA-ABS, anti-treponemal IgM and total antibodies), apart from the high value of proteins (66 mg / dl). Blood serum sample still tested positive for TPHA (1:2560) and for FTA-ABS (2+); total anti-treponemal antibodies (I.C.=4,6) were detected and antitreponemal IgM were 0,4. Serological test for HIV was negative. In light of these results, no evidence of an actual activity of the disease in CSF was pointed out. Thus, according to the opinion of the infectivologist there was no indication to treatment with penicillin intravenously; the patient took amoxicillin orally instead, until his discharge, and then assumed dexamethasone and rabeprazole.

Syphilis-associated aneurysms are a relatively rare finding, mostly occurring in the carotid artery, the middle cerebral artery, the anterior cerebral artery, the anterior and posterior communicating arteries and the basilar artery. To our knowledge, this the first report of 2 mycotic aneurysms involving both ACAs. Although many cases remain asymptomatic, the majority of symptomatic mycotic brain aneurysms manifest themselves through symptoms related to their rupture, such as: severe unremitting localized headaches, dizziness, seizures, altered mental status and focal neurological deficits related to subarachnoid hemorrhage. The diagnosis of brain mycotic aneurysms is based on the use of neuroimaging (non-contrast CT scans, contrast-enhanced CT angiography, MRI and conventional angiography), in the presence of predisposing infectious conditions, eventually highlighted by positive cultures of peripheral blood or the infected aneurysm wall and cerebrospinal fluid (CSF) examination.Treponemal tests such as the fluorescent treponemal antibody absorption (FTA-ABS) and the Treponema pallidum hemagglutination assay (TPHA), highly sensitive and specific in advanced-stage syphilis, can produce persistently positive results, known as ”serological scar”, that should be followed up longer due to the possible existence of other treponema reservoirs.

The treatment of intracranial infectious aneurysms remains controversial and highly individualized, because of the lack of clear standards to guide clinical decision making. The conservative management (that we opted for) is indicated for patients with unruptured aneurysms and/or with high surgical risk and consists of a 4-6 weeks lasting antimicrobial therapy.Then, the patient must be followed with serial angiography to monitor the stability of the aneurysms. Alternatively, the definitive treatment of ruptured aneurysms relies on surgical clipping (young, symptomatic patients with accessible aneurysms), endovascular coiling (surgically inaccessible or multiple aneurysms, at high surgical risk), trapping via either modalities.

A Singular Case of Neurosyphilis Manifesting Through a Meningovascular Chronic Inflammatory Process in Association with the Occurrence of Two Aneurysms Involving the Distal A2 Segment of Both Anterior Cerebral Arteries: A Case Report and Review of the Literature.
Bagatti D, Mazibrada J, Ligarotti GK, Nazzi V, Franzini A.
World Neurosurg. 2015 Nov 5