An old topographic compass displayed in a showroom at the Museum of Astronomy and Related Sciences (MAST) in Rio de Janeiro, Brazil (Fig. 1), took my curiosity namely because of its resemblance to a theodolite described by J. H. de Magellan (1722-1790). Not many things were known about its previous path. From the different documents studied, and the characteristics of this singular theodolite it must have belonged to the collections of instruments acquired for the Brazilian border demarcations undertaken after the Santo Ildefonso Treaty (1777), when the Portuguese and Spanish courts agreed on that enterprise. Several instruments were bought in London, supervised and chosen by Magellan, the Portuguese scientific instruments’ expert. 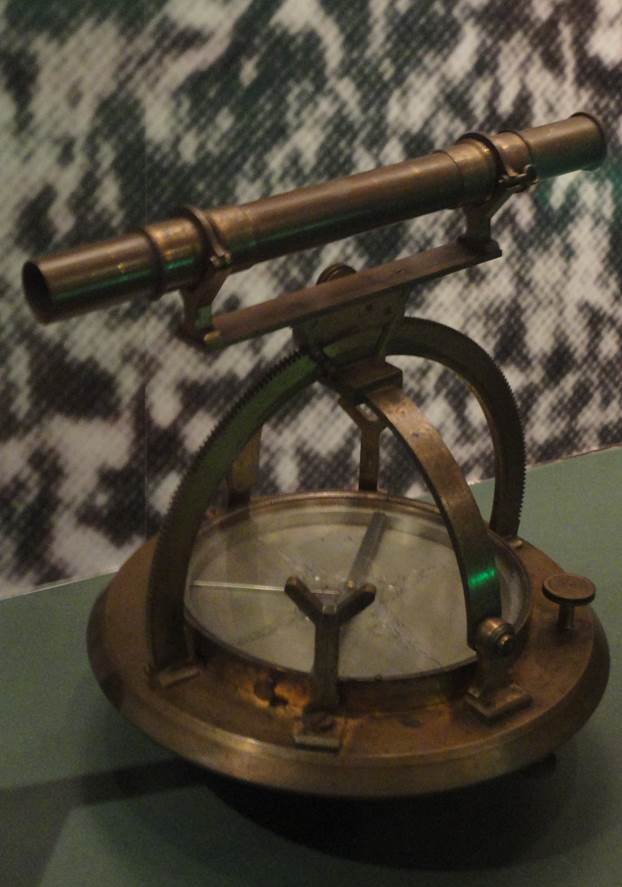 In the collections descriptions for Spain (1780), Magellan refers to the theodolite ordered and includes a drawing illustrating one of them. At the same time presents details on some parts of the instrument. George Adams Junior was the instrument maker that manufactured it with great care, and Magellan adds that Adams gave priority to its construction, providing it with all the benefits intended to. In particular, in its centre it presents a sufficiently lengthy needle to be useful to observe the magnetic variation in the most accurate manner when compared with any other known method. Concurrently, Magellan refers to the approval already received from the Portuguese practitioners.

We believe that this George Adams’ theodolite still existent in Rio de Janeiro observatory (MAST), must have belonged to the collections of instruments that were acquired to the 1777 Brazilian demarcations. Matching the present instrument with the all the description Magellan produced and published, similarity exists although with some missing pieces at present.

It seems that this theodolite in MAST remains as the last exemplar of those specifically acquired for the mission.

After a long voyage, of around 10000 km, since it was produced in London at the George Adams Junior’s workshop, and travelling through Lisbon towards Rio de Janeiro, this theodolite looks like a rare copy from this maker, with modifications by Magellan what may turn this instrument a unique model among other theodolites of the period. A probable range date of 1779 to 1787 is conceivable to this instrument presently belonging to the Museu de Astronomia e Ciências Afins in Rio de Janeiro, Brazil, as a memory of that Iberian political-scientific enterprise.