A detection and reporting health system of occupational diseases

SISVEL (Health Information System and Occupational Epidemiological Surveillance), is regulated legally and makes it easier for physicians of the Departments and occupational physicians of occupational risk prevention departments (SPRL) the compliance with the legal obligation to communicate to the insurers and to the National Social Security Institute (NSSI), those diseases that could be qualified as occupational.

Its implementation has been progressive, began in 2010 and currently, it covers 100% of the population. Teaching activities were carried out for primary care physicians in order to strengthen the use of SISVEL.

The communication is done through a proactive alert system in the computerized medical history, which doctors must respond. If the doctor does not have enough information to support the suspicion of the origin of the disease, the system allows them to request the investigation to the corresponding Public Health Center.

In addition, the application reminds the physician of the minimum clinical and exposure criteria to be met in each case and according to the health problem, to be reported as suspected OD, acting as a support system for physicians and it establishes a communication channel between the public health system, the occupational risk prevention system and the system of care and recognition of the labour damage.

During the year 2015, 3740 suspected occupational diseases were received, representing an increase of 7.5% over the previous year. The global communication rate is 87.91 cases per 100,000 inhabitants (Fig. 1). 93% of the cases reported in 2015 were diseases caused by physical agents. Carpal tunnel syndrome, epicondylitis, and arm rotator cuff syndrome account for 77% of communicable diseases. 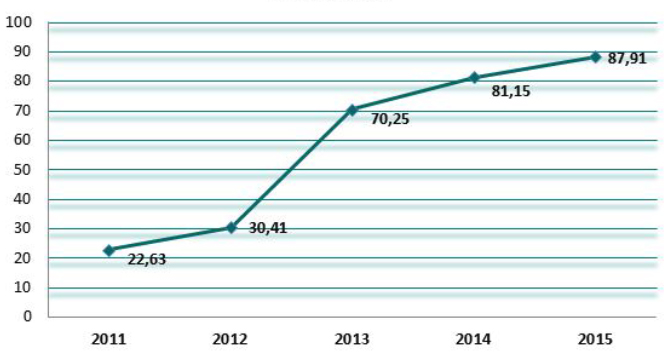 SISVEL is consolidated and recognized as effective for detecting OD system and is having a considerable impact on official statistics. According to data from the Observatory of Occupational Social Security Diseases, in 2014 there was a 42% increase in the national registry of OD from the Valencian Community and in 2015 the increase was 23%.

In conclusion, SISVEL is useful for the early detection of some of these damages to the health of the people who work; it allows anticipating the appropriate attention and prevention and it is an aid to the health and economic compensation of affected workers and the public health system.

SISVEL places Occupational Diseases as a public health priority, not only an occupational issue, allowing for the improvement of the knowledge of the health problems and exposure to risks of the working population.