Humanity has long suspected a correlation between creativity and mental illness. Those doubting such a relationship assert that psychopathologies inhibit the creative process, while others raise the issue that neither insanity nor creativity have been adequately quantified to establish such a connection. However, a new perspective has emerged through studying highly transparent, brain-like artificial neural systems called Creativity Machines® that originate ideas for which novelty may be quantitatively measured and whose stream of consciousness may be contrasted with a controlled external reality. 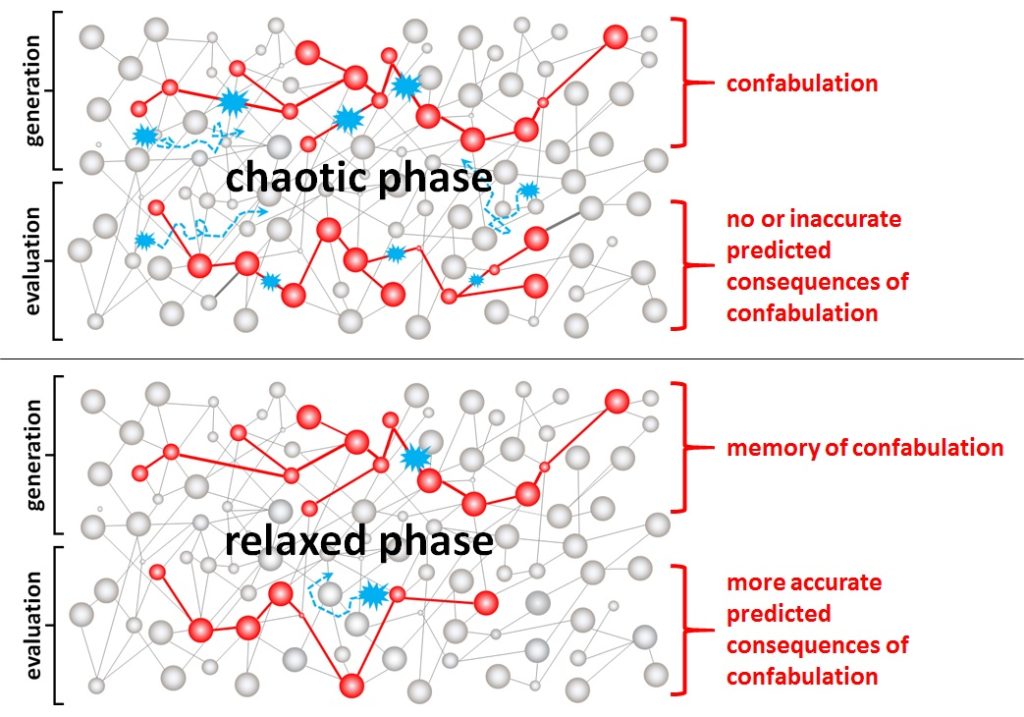 Fig. 1. During a Creativity Machine’s chaotic phase, potential ideas known as “confabulations” form within a matrix of artificial neurons and interconnections due to an abundance of randomly hopping connective disturbances (blue starbursts). These same disturbances block or hinder evaluation of confabulations by other portions of the neural architecture. Later, during a relaxed phase when milder disturbances reactivate past confabulations without corrupting evaluation, reinforcement of the more advantageous or novel of these potential ideas takes place.

Within these artificial neural architectures, transient disturbances to connection weights stimulate the ongoing formation of both true and false memories. As these memories simultaneously activate, they ‘wire’ themselves into new combinations of memories called confabulations. Up to a point, the greater these synaptic disturbances, the more novel the emerging confabulations become. Other portions of the neural system assess the utility of these candidate notions by predicting their consequences (Fig. 1). Accordingly, these contemplative artificial neural systems may be thought of as collaborating concept generators and evaluators. If the evaluators predict advantageous consequences to a forming confabulation, they may algorithmically command synaptic calm, allowing this candidate idea to be reinforced into a memory. On the other hand, if the evaluation component associates unfavorable consequences with a confabulation, it may allow ongoing disturbances to stimulate alternative notions.

An important observation regarding the Creativity Machine (CM) depicted in Fig. 1 is that there are no partitions between idea generators and evaluators and hence no option to selectively infiltrate just the generative component with diffusing synaptic disturbances. Instead, perturbations flood the entire system, affecting the evaluating subsystem as well, by either altering connections to corrupt evaluation, or pinning neuron states with an excess of synaptic disturbances to block appraisal. CMs overcome this dilemma by cycling between high and low levels of synaptic perturbation. At higher synaptic disturbance, ideas incubate outside the attention of the evaluating neural components, reinforcing themselves into latent ideas. Then, as the chaos subsides, the evaluating component becomes attentive to these notions now reactivated by milder perturbations. The drawback of this approach, however, is that at higher perturbation levels where novel concepts form, hallucination occurs along with sufficient pinning of neuron activations to render the evaluating component aloof to the merit/veracity of either confabulations or activity within the external environment. 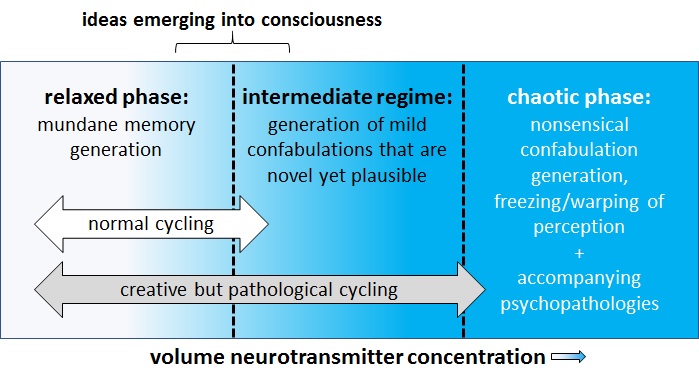 Fig. 2. In the brain, cycling of the kind depicted in the Creativity Machine of Fig. 1 is presumed to take place as global or “volume” neurotransmitter levels rise and fall. Potential ideas would form subliminally at higher neurotransmitter levels, making themselves known to evaluating neural components as these diffusing molecular disturbances dissipate. More mundane forms of cognition would involve minor swings in neurotransmitter level. Higher intensity variations would result in more novel ideation, and perhaps eminent creativity, along with accompanying psychopathologies.

Equating such computational synaptic disturbances with the global or “volume” release by the limbic system of either excitatory or inhibitory neurotransmitters into both idea-generating and evaluating components of cortex, we begin to see the connection between creativity and a range of psychopathologies. If this model is correct, creativity involves multiple swings in the concentration of neurotransmitters (e.g., adrenaline or dopamine) randomly diffusing through the open synaptic clefts between neurons. Generally, the more intense these chemical variations, the more novel ideation becomes, with intellectual products rising into consciousness between chaotic and relaxed poles (Fig. 2). Thus, we expect less creative individuals to experience low amplitude neurotransmitter swings with minimal accompanying psychopathologies. However, the cortices of more eminently creative individuals would be subject to higher levels of synaptic agitation that induce hallucination, inability to separate fact from fiction, attention deficit, depressed cognitive flow, and world views significantly differing from the norm.

Summarily, all knowledge in the brain is contained within the synaptic connections bridging neurons. To conceive ideas that transcend what a brain already knows, such connections must be altered, the most likely mechanism being the cyclic infiltration of cortex by spurious neurotransmitters. Unfortunately, these same meandering connections govern our perceptions, values, and morality, all of which will inevitably deviate from societal preferences as we strive toward profound levels of ingenuity.