Schema of a three-step method 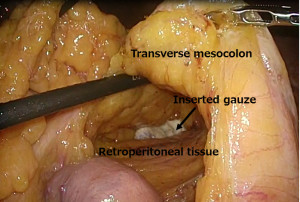 A tunnel created in step one

Step two: The transverse mesocolon is detached from the pancreas and spleen. The transverse mesocolon is attached to the pancreas, spleen and retroperitoneum, and its detachment from these adjacent organs is technically difficult. In step one, detachment of the mesocolon from the retroperitoneum was completed. Therefore, in step two, using the inserted gauze as a landmark, detachment of the mesocolon from the pancreas and spleen is easily completed. If the pancreas is injured during this procedure, peritoneal abscesses due to pancreatic fistulas may develop post-surgery. Additionally, injury to the spleen will usually result in massive bleeding. Therefore, insertion of the gauze in the tunnel at the first step is very important.
Step three: The splenic flexure of the colon remains fixed to the left abdominal wall. In this step, this lateral attachment of the splenic flexure is cut, and the laparoscopic SFM is completed.