Gait and movement capabilities of children with Cerebral Palsy (CP) are often assessed by clinicians by direct observation and qualitative clinical scales. Sometimes, video recordings are used to document changes in gait over times or after treatments, but the interpretation of walking remains qualitative. As opposite to qualitative, a quantitative assessment of the walking abilities can be obtained by means of a gait analysis exam. Gait analysis is a non-invasive exam that takes place in motion analysis laboratories where, by means of motion capture technology, skin based markers of the patient are recorded and processed into a series of parameters. From the biomechanical model it is possible to compute joint kinematics (i.e. how the joints move on the three planes in space), kinetics (i.e. the internal forces and moments loaded on bones and joints) and general parameters of motion such as cadence, velocity, step length, etc. These parameters quantitatively describe the motor capabilities of the patient and objectively document changes in motion patterns, for instance after a treatment or in case of injury. 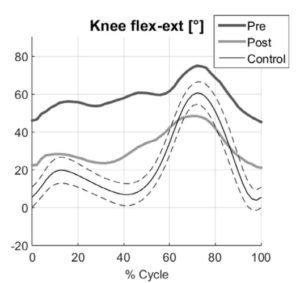 Fig. 1. Knee flexion/extension angle over a complete gait cycle for a children with crouch gait pre and post corrective surgery. Control line represents the normality for reference. The persistent knee flexion is documented by a shift in the track towards higher flexion angles. Corrective surgery reduced the offset between the track and the normality, reducing but not eliminating the persistent flexion.

A gait analysis exam usually produces a huge amount of data that is difficult to interpret, especially for non-technical and untrained staff. For this reason some data reduction techniques are being proposed to simplify global data interpretation, gait pattern identification and classification. Children with CP frequently have a “crouch gait” that is a walking pattern characterized by a persistent knee flexion (Fig. 1). In a gait analysis exam this is documented by an offset in the baseline of the knee flexion angle. The angle is computed across the whole stride cycle, starting and ending at two consecutive gait cycles.

To facilitate interpretation we defined a modern method that reduces gait data to a set of numbers describing: (i) the deviation from normality of each lower limb joint on the respective degrees of freedom; (ii) the offset between the curve baseline and the normality baseline. A synthetic number that describes the deviation from normality for the overall gait is also computed. The method was named Offset-Corrected Movement Analysis Profile (OC-MAP). By using this method, the gait analysis data is reduced to a couple of bar graphs depicting the deviation index and the offset on each joint. With respect to previous methods, our method produce valuable information such as the direction of the deviation. For instance, if on ankle dorsiflexion angle we observe a negative offset, this means that the deviation is towards a persistent plantar flexion. This kind of important information is missed by previous methods. Moreover this methods identifies if the deviation is due to the offset, with its clinical meaning, or if the deviation is due to other causes, with other clinical implications.

We applied our method to gait analysis data of children with CP that underwent orthopaedic surgery for the correction of crouch gait. The results are shown in Figure 2. A strong improvement in knee flexion was documented. Ankle angle changed from plantar-flexion to normal. An overall gait improvement was also documented. 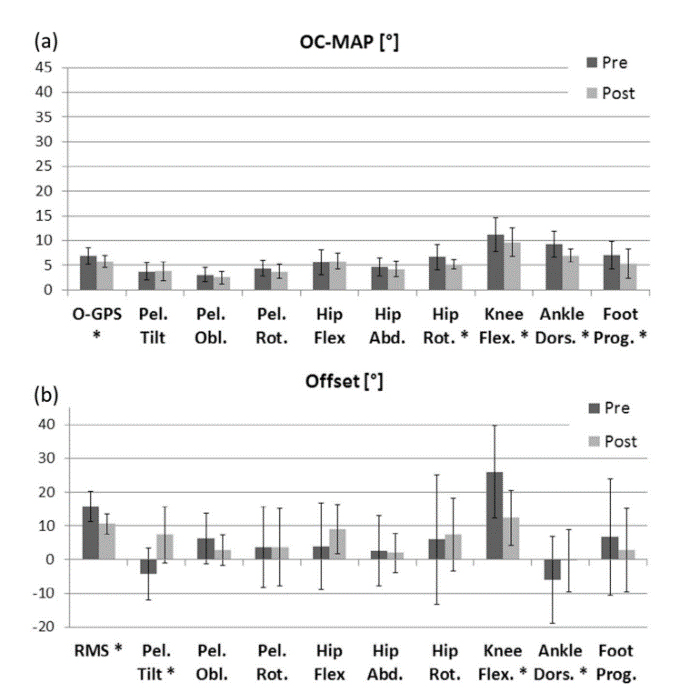 Fig. 2. Results of the Offset-Corrected Movement Analysis Profile (OC-MAP) for children with CP pre- and post-surgery. The reduction in the offset values documents walking improvements on the respective joints. * p<0.05.

Our method overcame some limitations of previous methods by representing the magnitude of the offset component of deviation. As the offset played a relevant role in gait deviation from normality, the OC-MAP method demonstrated being a clinically meaningful method to interpret gait data in children with CP. As a data reduction technique, this method is useful to summarize results of a gait exam while keeping valuable information for the diagnosis and classification of gait patterns. This method is also useful for quick comparison between datasets, such as pre-post treatment or different cohort of subjects.