A new PARADIGM for neurohormonal therapy in heart failure

Heart failure is a leading cause of hospital admissions and mortality worldwide. With an aging global population and enhanced survival after myocardial infarction, heart failure prevalence will almost certainly rise in the future. Although existing therapies have improved outcomes, there has been little recent progress in this area.

Recognition of the clinical significance of the neurohormonal axis in heart failure has been a critical step in the development of new therapies. Neurohormonal activation in heart failure patients occurs early in the disease and is widespread. The immediate short-term effects of renin-angiotensin-aldosterone system (RAAS) and sympathetic nervous system (SNS) activation are beneficial in that they sustain organ perfusion during periods of stress. However, this response becomes maladaptive when it persists, and it plays a major role in the progression of heart failure. 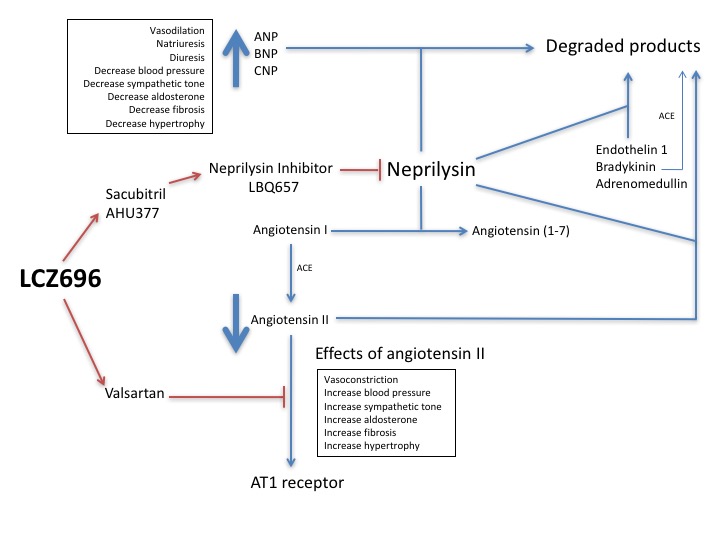 The sacubitril-valsartan combination was studied in PARADIGM-HF, a double blind, randomized trial in over 8400 patients with heart failure and reduced ejection fraction (HFrEF). The combination of the neprilysin inhibitor and ARB was compared to an ACE inhibitor (ACEI), enalapril, which had previously be shown to significantly reduce mortality in heart failure patients. The results of PARADIGM-HF showed that treatment with sacubitril-valsartan was superior to enalapril in reducing the risk for the primary endpoint of the trial, a composite of cardiovascular mortality and heart failure hospitalization. Approximately 20% risk reductions were seen in each of the two components. There was also a significant 16% risk reduction in all-cause mortality with the sacubitril-valsartan combination. These positive findings were accompanied by an acceptable side effect profile. Although symptomatic hypotension was more common in the sacubitril-valsartan treated patients, the number required to discontinue therapy was quite small. Adequate hydration, avoiding overdiuresis, appropriate reductions in other anti-hypertensive medications, and, if needed, a reduction in sacubitril-valsartan dose are recommended to treat symptomatic hypotension. Angioedema can also occur, particularly in black patients, and therapy must be stopped immediately when this occurs.

Based on its superiority to a clinically proven ACEI in further reduction of mortality and morbidity, sacubitril-valsartan was FDA approved in 2015 and is now an important addition to the HF armamentarium. It is estimated that patients, who are treated with this drug in place of current ACEI or ARB therapy will gain an additional one to two years of life, preventing approximately 28,000 deaths in the U.S. alone each year. Since the beneficial effects of sacubitril-valsartan were demonstrated across a broad spectrum of NYHA class II/III patients, it should not be reserved for patients with end stage or refractory heart failure nor should clinicians wait to use it until other therapy fails.