Multiple growth factors produced in our organism by different types of cells promote a variety of biological responses related to cell proliferation, differentiation, survival, migration or death. The granulocyte colony stimulating factor (G-CSF) is a protein that stimulates the production of neutrophils, a type of white blood cell. Based on this feature, this factor is commonly employed in the clinic for the treatment of neutropenias (a reduction of the number of neutrophils in the blood) produced, for example, by chemotherapeutic agents. It should be noticed that G-CSF exerts its biological activities through the interaction with specific receptors (G-CSFR) expressed on the surface of target cells. In this way, the G-CSF conveys information inside the cells. G-CSFR have been found in mature neutrophils, in progenitors of these cells or in some cell lines related to hematopoietic cells. In addition, G-CSFR have also been detected in non-hematopoietic tissues, such as maternal and fetal placenta tissues. This finding suggested a possible role of G-CSF in placenta development. 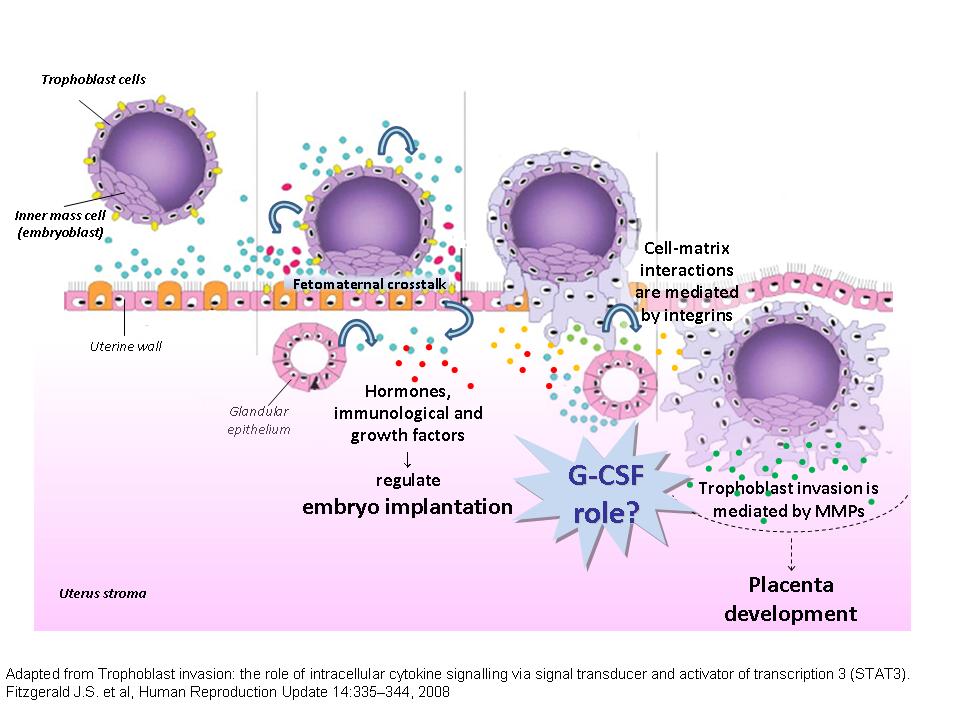 Fig. 1. Fetal-maternal environment. During normal pregnancy, trophoblast cells migration and invasion into maternal uterus facilitate embryo implantation. In this complex process, the crosstalk between fetal and maternal cells is regulated by numerous hormones and growth factors (adapted from J.S. Fitzgerald et al., 2008, Human Reproduction Update). Although the presence of G-CSF and G-CSFR during gestation had been previously reported, the role played by this factor in placenta remained uncertain until now.

Further studies, such as the efficiency of G-CSF administration in the treatment of unexplained recurrent miscarriage reinforced this presumption. In order to clarify this issue, we decided to examine the biological actions induced by G-CSF in placenta tissues by using a human trophoblast cell line derived from a 7-week normal placenta. Trophoblast cells are formed during the first stage of the pregnancy and surround the embryo providing nutrients. During the implantation, fetal trophoblast cells migrate and invade into maternal uterus to promote placenta development and provide an appropriate environment for embryo growth. This complex process is tightly regulated by hormones, growth and immunological factors, and several enzymes. Thus, while different hormones and factors, such as estradiol, progesterone, leukemia inhibitor factor, hepatic growth factor and vascular endothelial growth factor (VEGF) promote cell proliferation, differentiation and migration, a family of enzymes (metalloproteinases: MMP) facilitate extracellular matrix degradation and some receptors (integrins, cadherins) participate to mediate cell-matrix interactions. Although several of these factors have been extensively studied, the specific function of G-CSF in the placenta was unknown (Fig. 1.). With the purpose of making this topic more clear, we first detected the presence of G-CSFR in a human trophoblast cell line and then demonstrated that G-CSF:G-CSFR interaction increased the secretion of VEGF, a factor that stimulates placenta blood vessel formation. G-CSF also enhanced the activity of MMP-2, a type of MMP involved in the maternal extracellular matrix degradation; induced changes in the organization of actin cytoskeleton, an structure that powers cell migration; up-regulated the levels of beta1 integrin, a cell surface receptor found in invasive trophoblast cells; and stimulated the migration of trophoblast cells. 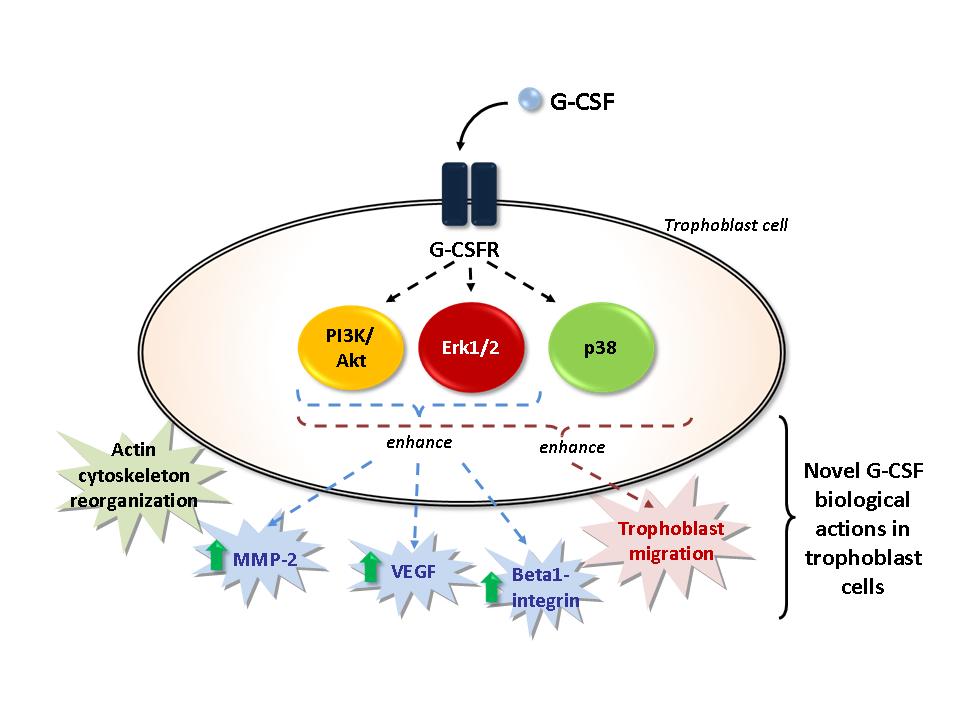 As occurs in our organism with many other factors, the binding of G-CSF to its receptors transmits multiple intracellular signals (known as cell signaling pathways) that converge into different biological responses. In our work, we also showed that G-CSF:G-CSFR interaction triggered distinct intracellular cascades, such as the pathways known as Erk1/2, p38 and PI3K/Akt. The contribution of these signaling pathways to the biological actions stimulated by G-CSF was further studied. In this regard, we found that the increment of VEGF, MMP-2 and beta1 integrin induced by G-CSF was mediated by Erk1/2 and PI3K/Akt pathways, while trophoblast cell migration was enhanced by Erk1/2, p38 and PI3K/Akt intracellular cascades (Fig. 2.).

To sum up, we have described for the first time the biological role played by G-CSF in human trophoblast cells. Based on our results, we propose that G-CSF should be included within the network of hormones and growth factors expressed in the fetal-maternal environment as an additional factor that regulates trophoblast invasion in order to make possible embryo implantation and placenta development. This knowledge could contribute to the design of new therapeutic approaches for pregnancy disorders.