A new role for vitamin D3

Mutations in the genome of body cells (somatic cells) can lead to excess activation of signaling pathways and thus to unlimited cellular proliferation and cancer formation. One such cancer-inducing pathway is the Hedgehog (Hh) signaling cascade, which is implicated in the development of tumors of the skin, the brain or the skeletal muscles and others. However, the establishment of targeted therapies against cancers essentially requires the exact knowledge of the physiological regulation of cancer-inducing pathways. The Hh signaling cascade has been intensively investigated for years but several aspects of its physiological regulation are still unknown. In fact, it is well-accepted that in the absence of the Hh-ligand the transmembraneous protein Patched (Ptch) inhibits its interaction partner Smoothened (Smo) which results in repression of the pathway’s activity. 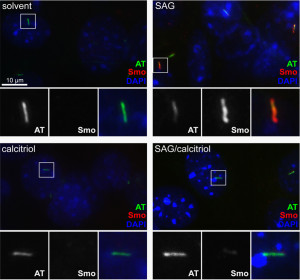 The binding of Hh-ligands to Ptch abrogates the inhibition of Smo and results in the activation of the pathway. However, mutational activation of the pathway (e.g. by inactivating mutations of Ptch) results in excess Hh signaling activity which can lead to cancer formation. Nevertheless, although a physical interaction of Ptch and Smo has been excluded the mechanism by which Ptch inhibits Smo has not been deciphered so far. Thus the hypothesis arose that the Ptch protein somehow regulates the release of a small signal-transmitting molecule that in turn inhibits Smo and subsequently the whole pathway. This hypothesis implies that a) the small inhibitor should be Ptch-dependently secreted from the cell and b) the small molecule specifically inhibits Smo’s function. Since Ptch has previously been supposed to act as a transporter-like protein for the shuttling of small oxysterol-like molecules, we analyzed if calcitrol the hormonally active form of vitamin D3, might act as this supposed molecule.

By testing the fundamentals of our hypothesis we demonstrated that Ptch indeed is essential for the cellular release of calcitriol. Furthermore calcitriol efficiently inhibits the activity of the Hh signaling pathway and prevents the translocation of Smo into, a small, antenna-like protrusion of the cell membrane found on most somatic cells (primary cilium, Fig. 1) which is highly implicated in Hh signaling regulation. Moreover, these effects seem to be also causal for the previously observed deceleration of tumor growth in mouse models of Ptch-associated skin and muscle cancers after calcitriol treatment. However we also observed that the calcitriol-mediated inhibition of Hh signaling pathway can be further enhanced by combination with the antifungal drug itraconazole. Taken together our data provided strong evidence that calcitriol is the first described physiologically existing inhibitor of Hh signaling cascade. This knowledge might be a key point for new prospects of targeted therapies against Hh-associated cancers.