Working memory load is the capacity of mental effort we put into memorizing information over a period of time. Researchers use an eye-tracker as a passive implicit input device to measure eye movement as an indicator of working memory load. Despite the accuracy of these devices, there are many factors that could add noise to the measurement, such as attention, and performing other tasks like search, counting, etc. The eye-tracker is one such device used to measure pupil size during visual search tasks as a means to measure working memory load. Previous studies have shown that an observer’s pupil dilates and constricts in response to variables such as ambient and focal luminance, cognitive effort, the emotional stimulus content, and working memory load. The pupil’s memory load response is of particular interest, as it might be used for estimating observers’ memory load while they are performing a complex task. 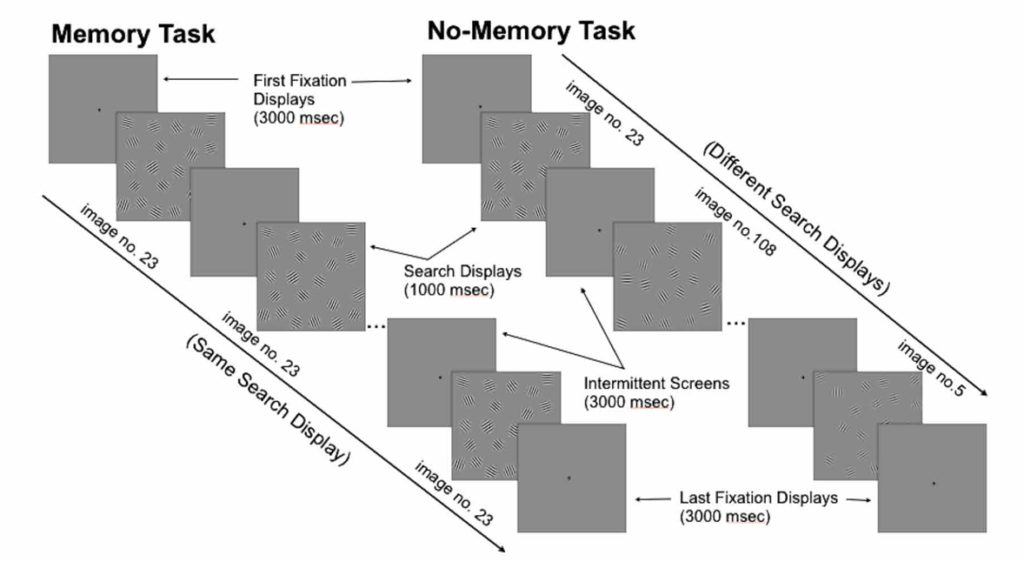 One important task which involves working memory is visual search. That is, the process of finding target(s) on a screen among different objects (distractors). A previous experiment (Porter et al, 2007) analyzed observers’ pupil sizes during search to study working memory load. The results they found indicated that during search, pupil size increased from the start of the trial onward, which the authors interpreted as showing increasing working memory load as the search progressed. However, while this conclusion is plausible, it is not entirely assured by their data due to the multitude of factors that influence pupil size. For example, the amount of effort an observer expends on finding the target during the search could have been a contributing factor. Furthermore, the pupil response to changes in working memory load is slow. It is thus possible that working memory load did not increase during the search trial but remained constant, and the observed gradual increase in pupil size was only due to the delayed pupil response.

In a formal way, this study presents a novel paradigm to investigate the relationship between memory load increase and search performance. More informally, the paradigm makes it possible to separate the search task and attention from the process of memorizing the scene. This way we can have better measurement for working memory load.

Our study estimated working memory load in visual search during the presentation of intermittent fixation screens (blank screen with a plus sign at the center), thought to induce a low, stable level of arousal and cognitive effort. Using standard visual search and control tasks, this paradigm reduces the influence of no-memory-related factors on pupil size. In the visual search task, after each intermittent screen, the same search stimulus reappeared. Therefore, subjects could make use of any information that they had memorized from previous screens, such as the set of already inspected items. In the control task, a new search stimulus appeared after every intermittent fixation screen. Consequently, subjects did not need to memorize any information across search displays within the same trial, because it would be useless in the next search display.

We found an early increase in working memory load to be associated with more efficient search, indicating a significant role for working memory in the search process. That means that the larger pupil size at the beginning of the search, the most likely subject will find the target in a short time.

Prediction of the user’s search efficiency will help develop better interaction between users and computer systems. At the same time, the paradigm could enable researchers to obtain better and more reliable measurements of the users’ working memory load while performing any given task.