Heart failure refers to the inability of the heart to pump enough blood to the periphery and meet the body’s demands for energy and oxygen. The symptoms of heart failure commonly include shortness of breath, asthma, fatigue and leg swelling. Currently, heart failure is still the biggest killer in the modern world. More than 20 million people have heart failure worldwide and 50% of them die within 5 years of diagnosis. One of the major causes of HF is dilated cardiomyopathy (DCM), which is characterized by enlargement of the heart and decreased ability to pump blood. To date, more than 35% of DCM cases have been shown to associate with mutations in the genes encoding proteins involved in calcium (Ca2+) signaling regulation, force and energy production in the heart. 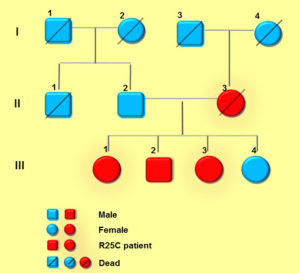 The heart is composed of specialized muscle cells named cardiomyocytes and they all work together to contract and relax the heart for every single beat. Similar to other muscles, the cardiac muscle requires Ca2+ to contract and squeeze blood out of the heart to the rest of the body. In cardiomyocytes, Ca2+ is released into the cytosol from an internal membrane system called sarcoplasmic reticulum (SR), which is the primary Ca2+ storage organelle. In cytosol, Ca2+ works as a switch that allows each muscle fiber to slide past each other and condense to contract. After contraction, Ca2+ is recycled back into the SR, which allows the muscle to relax and lengthen again. Phospholamban (PLN) is a small protein localized in SR that regulates Ca2+ levels in the heart. It plays a vital role in Ca2+ modulation, and therefore, the ability of the heart to function properly.

Recently, in collaboration with Dr. Ray Hershberger from the Ohio State University, we discovered a family with a novel PLN mutation (R25C). The family members that had this mutation exhibited depressed cardiac contraction, heart enlargement and cardiac arrhythmia (heartbeat is irregular, too fast, or too slow). Specifically, the member III.2 presented with sudden cardiac arrest and was diagnosed with DCM upon resuscitation at age 47. An implantable cardiac defibrillator (ICD) was therefore placed to correct his irregular heartbeat. Ten years later, he required heart transplantation due to worsening heart failure. His older sister (member III.1) was diagnosed with heart enlargement at age 51. After taking medication for 2 years, her heart function had become progressively worse which also was associated with severe cardiac arrhythmia. An ICD was required over the course of the following 10 years of her life. His younger sister (member III.3), who also had cardiac arrhythmia and required an ICD, was diagnosed with DCM at age 45. Their mother (member II.3) had complained of cardiac arrhythmia since the age of 47. She was diagnosed with DCM at 71 and was placed with an ICD at age 84. At age 90, she died from heart failure. 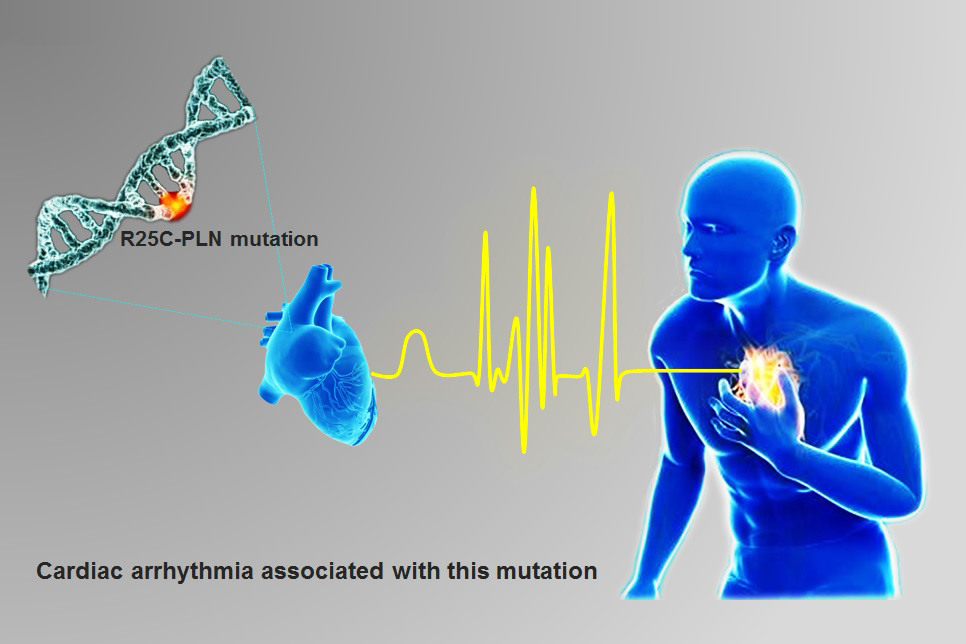 To understand how this mutation causes the observed detrimental effects in the heart, we expressed this PLN mutant in rat cardiac cells. We discovered that the R25C-PLN mutant decreased SR Ca2+-uptake, which disrupted intracellular Ca2+ homeostasis and led to severely depressed contraction and arrhythmia in these cardiomyocytes.

In summary, we reported a novel human R25C-PLN mutation which induces depressed contraction and arrhythmia in the heart. These findings may lead to the use of R25C mutation as a prognostic or diagnostic marker for DCM and/or arrhythmias in the future.