A novel mechanism by which viral integration drives cancer

Human papillomaviruses (HPV) are a group of about 200 DNA viruses that infect the skin, or the mucous membranes of the anus, genitals and oropharyngeal cavity. HPV infections are the most common sexually transmitted disease in the United States. A subset of HPVs can be classified as ‘high-risk’ due to their cancer-causing (or oncogenic) capabilities. During 2013–2014, the prevalence of genital HPV infection in the US population was ~43% amongst 18–59 year olds, and over half of these infections were due to ‘high-risk’ types (CDC Annual Report, April 2017). Persistent infection with oncogenic HPVs accounts for approximately 99% of cervical cancers, and is a leading cause of other anogenital and head and neck cancers, making it a significant global health burden. 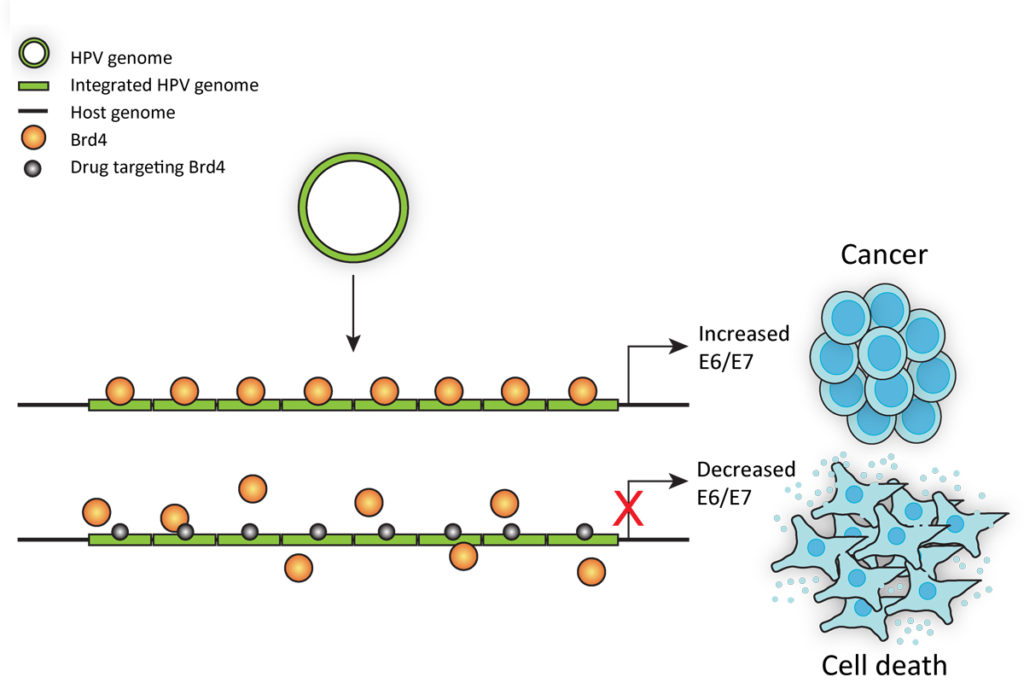 Cancer development results from dysregulated expression of the viral E6 and E7 genes (or oncogenes), which interfere with the function of cellular growth regulators and allow unchecked growth of damaged or mutated cells. The virus usually replicates in cells as a small circle of DNA but in most HPV-associated cancers the viral genome has become integrated into the host chromosomes. Integration is not part of the normal viral life cycle and results in dysregulated expression of the viral E6 and E7 oncogenes. This promotes unregulated cellular division and the accumulation of cellular mutations, which ultimately leads to cancer. Although there is a very successful vaccine available against seven of the thirteen known cancer-associated HPV types, there is currently no effective treatment for individuals who are already infected. It is thus imperative to further understand the mechanisms underpinning viral integration and promotion of oncogenesis in cells infected with high-risk HPV.

There are several ways by which integration can deregulate expression of the viral E6 and E7 oncogenes to promote cancer development, most of which increase the levels of viral RNA that encodes E6 and E7 proteins. We discovered recently that under some circumstances tandem integration of multiple copies of oncogenic HPV16 viral DNA could form a super-enhancer-like element; this is a novel mechanism that drives high viral oncogene expression from the integration site. Super-enhancers are large clusters of enhancer elements, which are short DNA sequences that regulate the level of expression of a linked gene. Super-enhancers are highly occupied by key cellular regulatory factors and they often develop to drive cellular oncogene expression in cancer. We discovered that the integrated HPV16 locus was heavily enriched in the three regulatory factors that define super-enhancers, Brd4, H3K27ac and MED1, and proposed that this viral super-enhancer-like element was driving high expression of the E6 and E7 oncogenes. Tumor cells are often addicted to super-enhancer driven oncogenes and thus are particularly sensitive to disruption of regulatory factors bound to the super-enhancer. In fitting with this, we showed that viral transcription from the tandem integration locus can be targeted by drugs which disrupt Brd4 binding, resulting in greatly reduced levels of viral E6 and E7 oncogene expression and leading to cell death (Fig. 1). This has great therapeutic potential against cancer cells harboring integrated HPV that could be targeted by drugs which perturb associated super-enhancer function.

This research was supported by the Intramural Research Program of the NIH, NIAID