Neuronal nicotinic acetylcholine receptors (nAChRs) are a family of ligand-gated ion channels that mediate fast synaptic transmission in the brain. These receptors are homo- or hetero-pentameric combinations of the α and the β subunits which each subtypes have their own pharmacological and functional profiles. Currently, there are 12 known nAChR subunits (α2-α10 and β2-β4) expressed in the brain. Neuronal nAChRs have been recognized as key receptors in a variety of neuropsychiatric and neurodegenerative diseases such as Alzheimer’s disease, Parkinson disease and multiple drug addiction.

The α4β2 and α7 nAChRs are the most prevalent subtypes of nAChRs in the brain. They are associated with cognition, memory formation and behavior, while the a3b4 subtype is predominant in sensory, autonomic ganglia, adrenal grand and mainly expressed in the brain regions involved in rewarding effects of abused drugs such as medial habenula and interpeduncular nucleus. The α3β4 nAChR has recently drawn attention based on the results of the genetic association studies that revealed the correlation of single nucleotide polymorphisms in the gene cluster CHRNA5/A3/B4, encoding for the α5, α3 and β4 subunits with an increased risk of nicotine dependency. Furthermore, only the β4-null mice but not the β2-null mice show a reduction in the nicotine withdrawal symptoms, therefore, the β4 nAChR subunit is necessary for nicotine withdrawal. Recent pharmacological studies of 18-methoxycoronaridine (18-MC) and AT-1001, the α3β4 nAChR antagonists also verify the involvement of the α3β4 nAChR in the rewarding effects of multiple drugs of abuse by reducing nicotine, methamphetamine and morphine self-administration in rats. In agreement, in vitro autoradiographic studies in mice using [125I]AT-1012, an analog of AT-1001, showed highly localized binding of the radiotracer in the brain regions known to have high concentrations of the α3β4 nAChR. To gain a better insight into the distribution and the precise role of α3β4 nAChR in the neurodegenerative diseases and drug addictions, a selective radiotracer targeting this nAChR subtype for positron emission tomography (PET) is needed.

A novel PET radiotracer for imaging the α3β4 nAChR was developed herein starting from the design and synthesis of six racemates (T1-T6) and its enantiomers based on the structure of triazole-quinuclidine QND8. All (R)-enantiomers were found to be selective to the α7 nAChR while its (S)-counterparts were selective to the a3b4 nAChR. (S)-T1 binds selectively to the α3β4 nAChR (Ki 3.09 nM) with very modest off-target binding to the related receptors i.e. α1 receptor, dopamine receptors and serotonin receptors. Radiosynthesis of (S)-[18F]T1 was achieved by two-step reaction, starting with the preparation of the [18F]alkyne synthon (ethynyl-4-[18F]-fluorobenzene; [18F]5), followed by the click reaction between [18F]5 and (S)-azidoquinuclidine. The overall isolated radiochemical yield was 4.3±1.3% with total synthesis time of 130 min, the radiochemical purity > 99% and molar activity > 158 GBq/mmol. (S)-[18F]T1 was very stable under in vitro physiologic conditions. 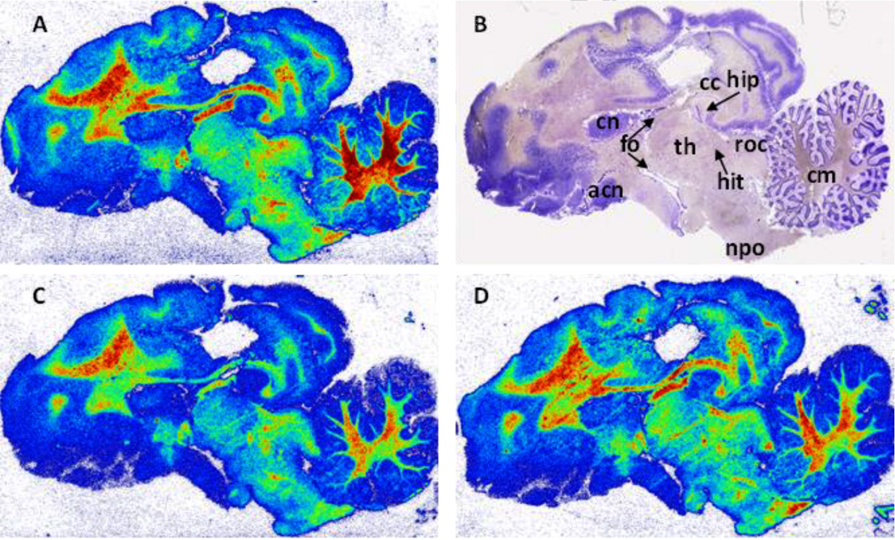 The brain uptake and brain-to-blood ratio of this tracer in mice at 30 min post injection were 6.06% ID/g and 6.1, respectively. The developed tracer remained intact > 99% in brain homogenates. Only one major radiometabolite was detected in plasma and urine samples. In vitro autoradiography on pig brain slices revealed high binding of (S)-[18F]T1 to brain regions consistent with the α3β4 nAChR distribution. Selective binding of (S)-[18F]T1 was evidenced by the reduction of the accumulation of this tracer in the presence of a selective α3β4 nAChR  partial agonist, AT-1001 and the unaltered retention of the tracer in the presence of α7 nAChR-specific SSR180711. These findings suggest the potential of novel (S)-[18F]T1 for imaging the α3β4 nAChR in the brain which is a promising tool for both diagnosis and therapy evaluation of patients with neurodegenerative diseases and drug addiction.