A paradigm shift in self-cleaning materials

In order to keep touchscreens, windows and walls free of dirt and fingerprints they need to be coated with anti-smudge materials. For practical applications, anti-smudge materials must be water- and oil-repellent, wear-resistant, optically clear and readily applicable onto various substrates. However, previous attempts have failed to develop a self-cleaning coating that can accommodate the above features altogether. Muhammad Rabnawaz (postdoctoral fellow) and Prof. Guojun Liu (Principal Investigator) of Queen’s University, in Ontario, have invented a self-cleaning material that combines all of these exciting properties into a single polyurethane coating. 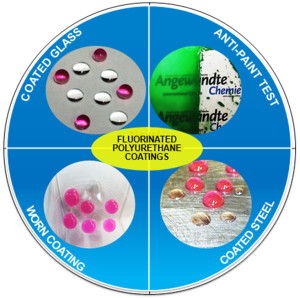 This newly invented paint is a polyurethane coating where polyperfluoropolyethers (PFPEs) are embedded. Polyurethane is an inexpensive polymer with remarkable adhesion properties to substrates such as glasses, ceramics, metals, and fabrics. Meanwhile, PFPEs are highly water and oil repellent materials that remains liquid even at very low temperatures (-80 °C). In these films, PFPE forms a thin oily layer on the polyurethane surface that causes the surfaces of these materials to become slippery. Consequently, liquids or smudges that are dispensed onto these surfaces readily slide off because the slippery (lubricating) thin liquid film cannot grab the liquid and also due to the water- and oil-repellent nature of the PFPE.

The newly invented films could be prepared at a thickness on the scale of tens of micrometers without compromising their desirable optical clarity. In principle, fluorinated materials segregate out from non-fluorinated polyurethane because “like does not dissolve unlike”. Consequently, fluorinated molecules that are mixed with hydrogenated polyurethane phase separate into domains that are sufficiently large to refract light and lose their optical clarity. In order to prevent macrophase segregation between PFPE and polyurethane, PFPE was initially grafted onto hydrogenated polyol to prepare PFPE-polyol. The polyol component of PFPE-polyol readily mixed with pre-polyurethane materials due to their mutual compatilbility. In order to avoid interference from PFPE, the films were prepared from an organic solvent in which the PFPE component was insoluble and hence minimum repulsion occurred between the ingredients of the films. As partial crosslinking took place before the organic solvent had evaporated, no phase separation was possible after the evaporation of the organic solvent. As a result, thick films were obtained with great optical clarity. Also, these films did not undergo noticeable surface reconstruction during contact with testing liquids and they retained their anti-smudge properties even after extensive wearing.

This method is universal and has been applied to a variety of substrates such as glass, wood, fabric, metal, and ceramics via dip-coating, spray-coating or dispensing techniques as shown in the Figure. The coatings repelled water, diiodomethane, hexadecane, ink, and an artificial fingerprint liquid. Furthermore, they did not interfere with the functions of the touchscreen of a smartphone.

Such coatings may find many applications, such as the protection of hand-held electronic devices from fingerprint/smudge deposition and the protection of historical buildings from graffiti. This newly developed self-cleaning technology has been licenced to a Canadian based coating company for commercial production.