A synaptic receptor with a dual personality

Learning and storage of information in the brain at the cellular level involves dynamic modification of synapses, the place where information passes from a neuron to another. The efficacy of this transmission of information changes and depends on the previous activity pattern. This is thought to represent the basic mechanism for learning and memory. Among all proteins regulating synaptic transmission, the so-called glutamate receptors play a fundamental role in neural communication, learning and memory formation. Kainate receptors (KARs) are the less known members of the glutamate receptors family. However, KARs have a role in brain physiology and pathology. Indeed, their deregulated activity have been linked to a number of brain disorders such as epilepsy, schizophrenia, bipolar disorders and autism. 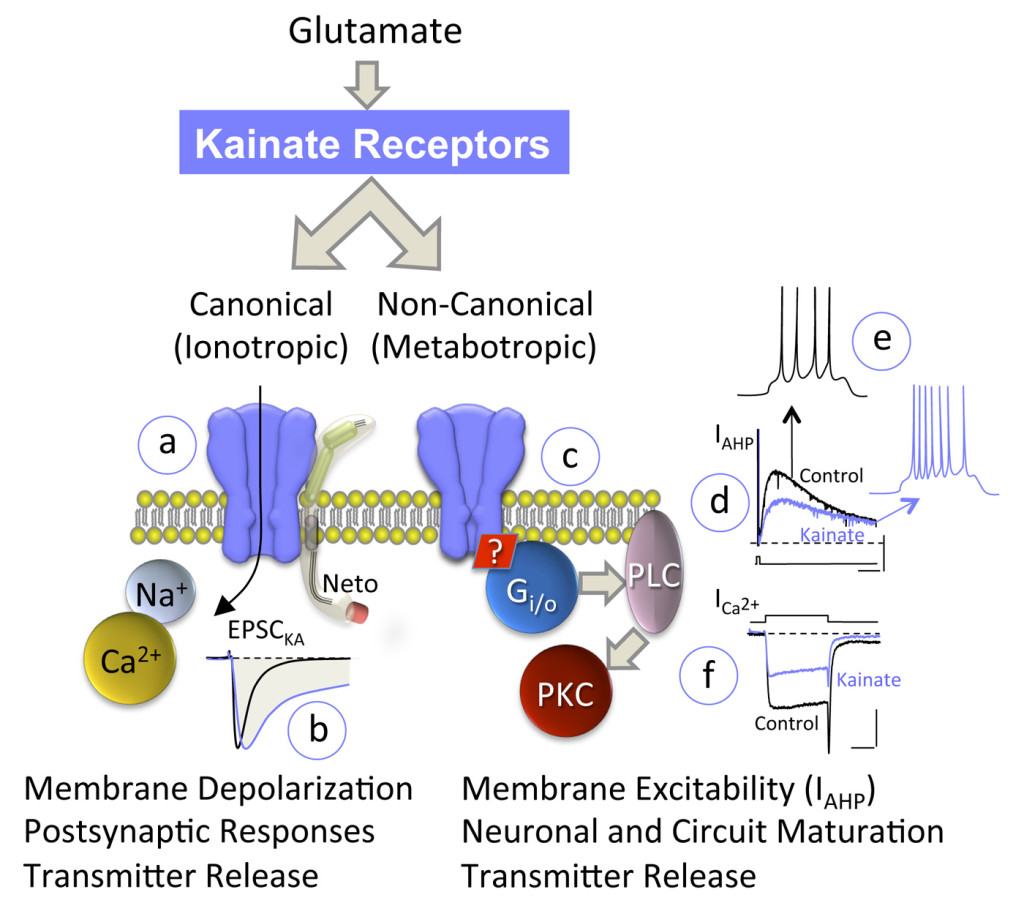 Kainate receptors signal through two different and independent pathways. On the one hand, the gating of the channel (canonical pathway – a) is responsible for membrane depolarization and the synaptic responses (b), and probably for the facilitation of neurotransmitter release at some synapses. On the other hand, KARs activate G proteins (c), signaling through the stimulation of phospholipase C and PKC in a manner independent of ion flux. The main effects so far documented are: the increase in neuronal excitability through the inhibition of afterhypopolarizing current (IAHP – d), leading to an increase in the firing frequency of these neurons (e); the facilitation and inhibition of transmitter release, probably through the modulation of calcium currents (ICa2+ – f); and their role in the maturation of neuronal circuits during development. How an ion channel gets coupled to a G protein is unresolved.

Although KARs have a molecular structure coinciding with all ionotropic glutamate receptors and can indeed pass ionic current to activate the neuron, they can trigger a second messenger cascade as well, which is totally unexpected for an ion channel, and therefore we called it non-canonical signaling. This action is sensitive to Pertussis toxin, indicating that it must be mediated by Gi/o proteins activation. How an ion channel gets coupled to a G protein remains a mystery. To get insight into this non-canonical action we performed a proteomic analysis and identified proteins that interacted with the intracellular terminal of one of the widely expressed KAR subunit in the brain, GluK1. Among others interactors, we identified the α subunit of Go protein. We further determined that GluK1 and Gαo partially colocalized in neuroblastoma cells cotransfected with plasmids carrying both proteins. Additionally, sophisticated methods involving the reconstitution of fluorescence after complementation (BiFC) indicated that Gαo and GluK1 were in close proximity when they are expressed in the same cell. Furthermore, we found by using bioluminescence resonance energy transfer that GluK1 activated Go in cells exclusively expressing this subunit. Finally, we observed that the non-canonical signaling disappeared in dissociated mouse dorsal root ganglion neurons prepared from mice lacking GluK1 subunits (KO mice).

Ionotropic (e.g. KARs) and metabotropic glutamate receptors differ profoundly in their structure, making it unlikely that G-protein activation by either kind of receptor upon glutamate binding follows a similar mechanism. However, several indications in our work advocate for a direct interaction between GluK1 and Gαo protein. Together, these results lead us to propose that GluK1 and Gαo form part of a specific protein complex and that they interact with each other without the need for additional proteins.

Non-canonical KAR signaling has been lately implicated in a number of fundamental processes, e.g. modulation of neuronal growth and maturation, as well as in the equilibrium between excitation and inhibition in the nervous system, upon which correct brain performance ultimately depends. Therefore, our data provide clues for the development of drugs able to discriminate between both signaling systems, the two personalities of KARs, further improving our capacity to finely modulate brain activity.