A 62-year-old woman was admitted to our institution for the surgical evaluation of a mass in the right iliac fossa causing an enduring abdominal pain. The patient presented with the following comorbidities: visceral class I obesity (BMI 30.4 kg/m2), and arterial hypertension. The only abdominal surgical procedure she reported was an appendectomy at the age of 32. The patient complained of a well-localised abdominal pain in the region of her right iliac fossa, near to the anterior superior iliac spine. The pain was described as continuous, with no precise temporal indication about its onset and was exacerbated during trunk flexion-extension movements; it had no correlation with meals or bowel movements and was radiated to the ipsilateral lumbar region. Palpation of the right iliac fossa produced sudden worsening of localised abdominal pain without signs of peritoneal irritation; despite the subcutaneous layer thickness, a 5-7 cm oval-shaped area of consolidation with regular borders and elastic consistence was palpable. The ultrasound examination of the abdomen had revealed the presence of a hypoechogenic mass in the region of the right iliac fossa measuring 80-33-42 mm on its longitudinal, anterior posterior and transverse diameters, respectively. A subsequent CT scan confirmed the presence of a well-circumscribed mass, with small calcifications inside (Fig. 1a-b-c), located medially to the anterior superior iliac spine, between the transversus abdominis muscle and parietal peritoneum. A benign tumour of mesenchymal origin affecting the abdominal wall was suspected. Given the symptoms described by the patient, we proceeded to the radical excision of the lesion under general anaesthesia. 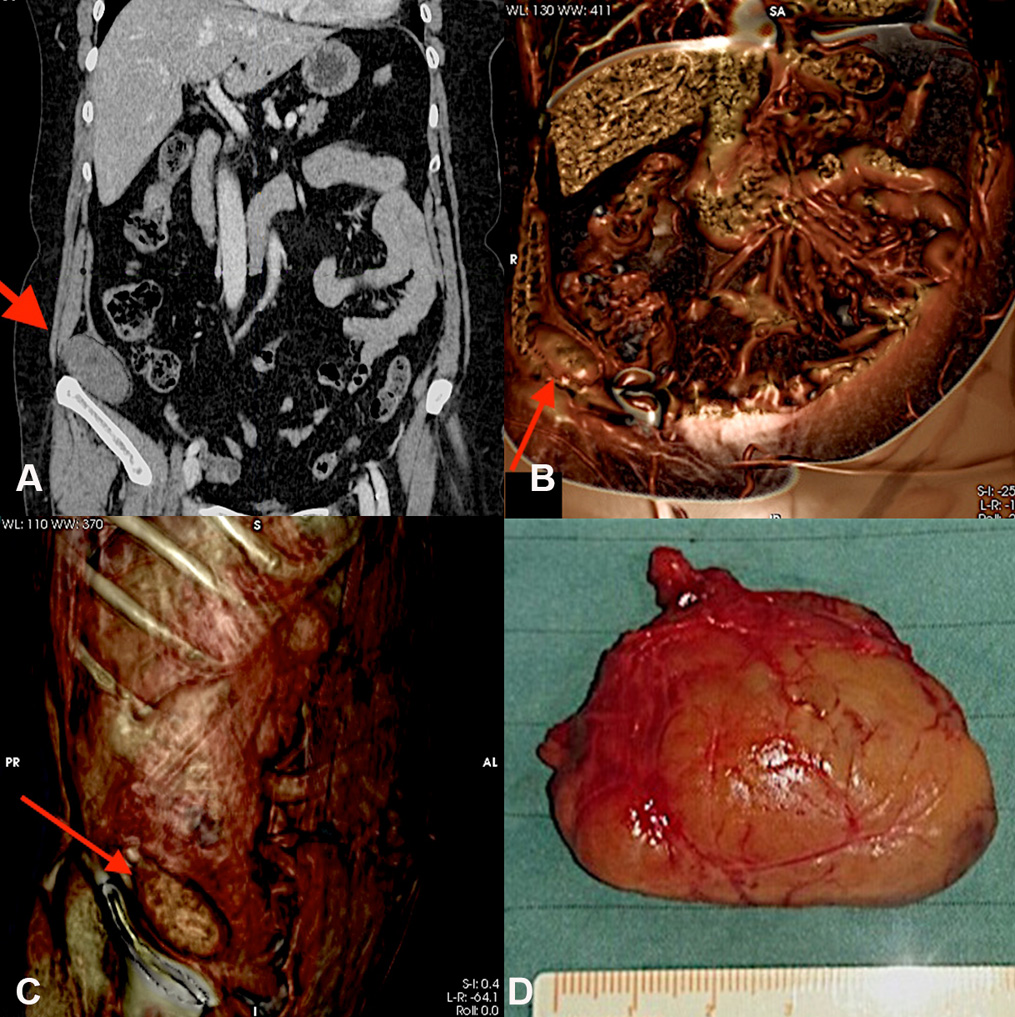 The mass measured 80-40-35 mm (Fig. 1d) and showed no connection with the parietal peritoneum, exclusively involving the musculo-fascial layer of the abdominal wall.

A histological examination of the surgical specimen revealed many features consistent with the diagnosis of “ancient” schwannoma. The patient was discharged on the second postoperative day after an uneventful postoperative period. Hospital visits were scheduled at one week and one month after surgery: the patient reported no recurrence of abdominal pain, with an improved quality of life.

In the latest update of “WHO classification of soft tissue tumours”, schwannomas are classified as nerve sheath tumours, a new category that also includes neurofibromas, perineuriomas and traumatic neuromas (or pseudoneuromas). In the vast majority of cases they are diagnosed as sporadic lesions, whereas in 20 % of cases they are part of a systemic disease such as type 1 neurofibromatosis schwannomatosis or Carney complex. Schwannomas – also called “neurilemmomas” or “Verocay’s neurinomas” – are almost exclusively composed of hyperproliferative Schwann’s cells and appear macroscopically as a well-delimited, capsulated mass with a smooth surface. There are two different patterns of cellular organisation: one hypercellular, with cells whose nuclei gather in a palisade fashion (type Antoni A area), and one hypocellular, with an abundance of macrophages, mixomatous stroma and microcystic figures within (type Antoni B area). The Antoni B area could represent the result of degeneration and involution processes of the hypercellular Antoni A area. When degenerative features tend to be predominant in a specimen of schwannoma, the adjective “ancient” is added to the definition: some of these regressive characteristics were initially deemed to be the expressions of malignancy. Nerve sheath tumours mostly arise in the head and neck region and in flexor surfaces of the limbs and trunk; Despite numerous accounts of unusual schwannoma locations existing (the eyelids, the fingertips, the mesentery, the parotid gland, the vagina, the porta hepatis), the literature is scarce about reports of abdominal wall schwannomas. To date, only five cases – all of which are relatively recent – are present in medical records: among these, only one case depicts a small abdominal wall schwannoma causing well-localised left lower quadrant abdominal pain in a 57-year-old woman. In our case, we believe that visceral obesity and the patient’s perception of pain as a symptomatic remnant of her old appendectomy could have allowed the tumour to grow unnoticeably over time. Imaging techniques can prove useful in the diagnosis of these types of tumours given the lack of accuracy of fine needle aspiration procedures. Schwannomas have a good prognosis overall, with malignant degeneration being very rare. Local recurrence is plausible only if non-radical resection of the primitive tumour occurs. Although the authors of the first asymptomatic case of schwannoma of the abdominal wall suggest a conservative approach to these kinds of lesions, we advocate the surgical removal of the tumour when it presents as a cause of abdominal pain, ensuring that a radical excision is performed given the possibility – though rare – of malignant transformation or recurrence. Clinicians should consider a diagnosis of abdominal wall neoplasm when dealing with unexplained abdominal pain, given the possibility of total regression of symptoms through surgical therapy.