Some lizards, especially numerous species of geckos, are able to stick, walk and run along vertical or inverted surfaces, defeating gravity (Fig. 1 A). The nature of the subtrates is very variable in both physical and chemical characteristics, from a wooden or brick surface to a smooth glass. This amazing ability is made possible by the presence of modified scales on the palmar surface of the gecko’s digits that forms adhesive pad lamellae (Fig. 1 B). The surface of pad lamellae bears hundred of thousands or millions of microscopic and elongated bristles of 20-80 μm in length and 0.5-2.0 μm in diameter, termed the setae. Setae derive from a specialized corneous layer of the pad lamella indicated as oberhautchen, whose apical part branches into thinner terminal filaments of 0.3-0.2 μm (Fig. 1 C).

The terminal endings of setae, termed spatulae, are the sticking nano-areas of the setae where the mechanism of adhesion takes place. Past studies indicated that gecko adhesion was mainly derived from physical forces acting between the setae and different substrates, while the chemical composition of the setae was not considered. When the distance of the approaching spatula from the substrate gets closer than 0.001 μm (10 Angstroms), most adhesion depends from a van Der Waal mechanism. In this range, weak attractive forces become very strong at distances below 10 Angstrom. Adhesion however may also depend from stronger electrical forces at broader distances than 10 Angstroms, also at 0.01 μm to 1.0 mm, a process indicated as “contact electrification”. This suggests that also the chemical nature of setae may play a role in the mechanism of adhesion. Molecular biology and proteome studies have shown that most of the setae are made of Corneous β-Proteins (formerly known as β-keratins) 100-180 amino acids long. These proteins possess an initial -NH2 and a terminal -COOH regions rich in cysteine that can form –S-S- bonds with similar or other minor proteins present in the setae (Fig. 2A). The central region of these proteins contains a 34 amino-acid long region generally containing 4 beta-sheets that allows the polymerization of these proteins (monomers) into long filaments (polymers) that further aggregate forming the supporting β-filamentous bundles present inside the setae (Figs. 1 C, 2 A). Studies with the electron microscope and specific antibodies designed against some Corneous b-proteins have revealed that these proteins are present in the setae and also in their spatula endings (Fig. 2B). The bio-informatics analysis of the 20 or more Corneous β-proteins of the setae of geckos indicates that they are charged positively and this electric charge impedes that they stick together as similar charged surfaces are repulsive (Fig. 2C, C1). 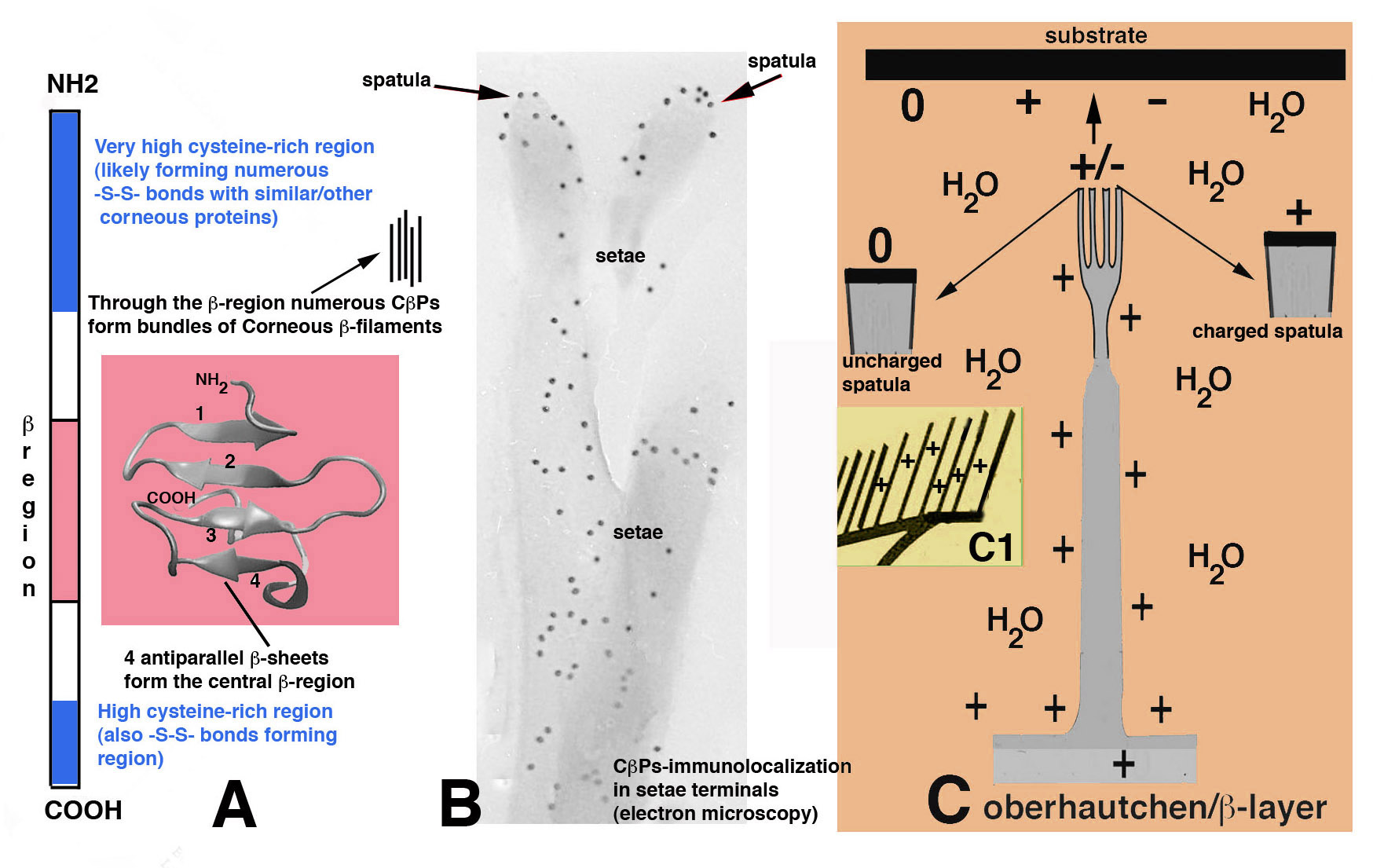 Furthermore the charged or neutral surface of the spatula might also influence the mechanism of adhesion by the induction of dipoles on almost any type of surface substrates, neutral, charged positively or negatively, or on the water molecules present on the surfaces and among setae (Fig. 2C). A charged surface can operate in the long-distance electrical mechanism of adhesion and also in the sort-distance van der Waals mechanism. In presence of water or other ionized or polar molecules on the substrate surface, the hyperpolarization and induction of dipoles can considerably strengthen van Der Waals interactions. In case of neutral surfaces, charged spatulae might even induce dipoles. Therefore the knowledge of the protein structure and localization of specific charged proteins of the setae and in the spatula is important to grasp which are the best characteristics for producing most effective synthetic adhesive polymers for numerous material science applications.

Review: mapping proteins localized in adhesive setae of the tokay gecko and their possible influence on the mechanism of adhesion.
Alibardi L
Protoplasma. 2018 Nov