Alcohol injections for the treatment of intermetatarsal neuromas

Intermetatarsal neuromas, sometimes called Morton’s neuroma, cause nerve pain in the forefoot.  It arises due to entrapment of the nerve(s) supplying the toes(s) due to compression of the forefoot. Although any foot can be affected it’s uncommon to affect both feet. Similarly, it’s unusual to find multiple neuromas affecting the same foot. The condition is 8-10 times more common in females than males with people aged 45-50 years more at risk. The part of the forefoot most commonly affected is the third inter-metatarsal space with the first and fourth space rarely affected.

Symptoms
People affected usually complain of a sharp, lancing pain, which is severe in onset that occurs suddenly when walking, especially with certain shoes which usually have a narrow front. Some people have to stop walking, take their shoe off and massage or move the toes to achieve some relief. Others report a tingling or burning sensation in the forefoot. In worst cases, it can be debilitating and affect the person’s daily living restricting their walking. 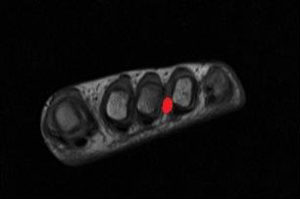 Diagnosis
The condition is diagnosed following manual clinical tests that reproduce the symptoms and can be confirmed with diagnostic ultrasound imaging. The diagnostic investigations suggest that intermetatarsal neuromas become a problem when the diameter is 5mm or more.

An extensive review of studies using alcohol injections report mixed results with some suggesting that alcohol injections reduce pain and improve quality of life whilst others report that it does not work. However, they all agree that alcohol injections appear to be safe although sometimes a short-lived side effect of burning pain lasting a few days may occur. There are also disagreements in alcohol concentration and guiding verses not guiding the injection using ultrasound imaging. All the studies reviewed used poor methods of investigation. Thus, this review was unable to afford a conclusive opinion on the treatment of intermetatarsal neuroma(s) with alcohol injection(s). 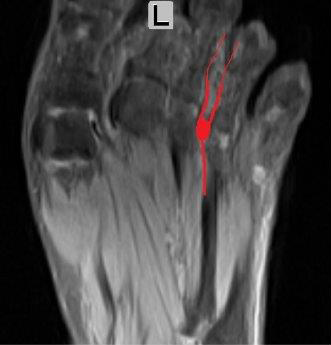 However, the studies do highlight some important findings that can be used by researchers wanting to investigate the topic in more depth. Until future studies can provide robust evidence, it is recommended that a stepwise approach to the management of intermetatarsal neuroma(s) is used. The management of intermetatarsal neuroma(s) should initially use other more evidence-based treatments (e.g. steroid injections) and non-invasive treatments (e.g. insoles, advice, etc). The option of alcohol injections may be considered for those awaiting surgery. Clinicians should also be aware that the evidence for the most effective percentage of alcohol concentration to inject still needs to be established, however at higher concentrations there appears to be an increase in adverse events although these are short lived. In addition, when deciding what concentration to use and whether to guide the injections using imaging, one should also take note that two animal studies reported no nerve damage regardless of alcohol concentrations used for injections around the affected nerve. With regards to injections into the affected nerve, one study reported no effect up to alcohol concentrations of 30%. The other reported that with alcohol concentrations of 25% a quarter of nerve fibres showed damage meaning some success; with alcohol concentrations of 50% half the nerve tissue was destroyed.

In conclusion, the treatment of intermetatarsal neuroma(s) remains a clinical challenge, with steroid injection in the short term supported more strongly by more credible evidence but long-term management remains an area where more research is required. Given the lack of quality evidence to support the effective treatment of intermetatarsal neuroma(s) using the current range of reported treatments, a staged treatment approach may be a logical option until further research evidence becomes available. At present, alcohol injections could be included in this stepwise approach for those awaiting surgery, but more high-quality evidence is required.