One of the most remarkable discoveries in the human fossil record is an Australopithecus afarensis partial skeleton nicknamed Lucy dated to 3.2 million years before present. Discovered in 1974 by Donald Johanson and his colleagues, the skeleton features nearly every major bone of the skeleton, including nine vertebrae, which are very rare in the fossil record because of their fragile nature. 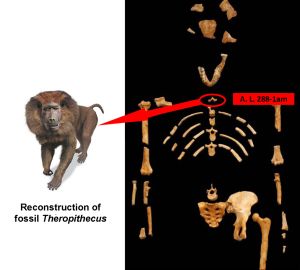 Forty years later, Dr. Marc Meyer of Chaffey College in California and his colleagues noticed that one vertebra looked unusual compared with the other vertebrae, and was the only bone in Lucy’s skeleton to exhibit a polished or water-worn appearance. Lucy’s skeleton was discovered in an archaeological level that geologists determined had been a stream, which might explain its appearance, but Meyer’s team wondered why only this single bone was water eroded and the others were not. They began investigating whether this bone did in fact belong to Lucy, or if it had been mistakenly attributed to her.

They found that this one vertebra was not only unique in its appearance, but was also too small to belong to Lucy’s spine. The size of all of the other bones in Lucy’s skeleton were in agreement for single individual, but the scientists’ new analysis indicated that this bone belonged to an individual considerably smaller than Lucy.

Next, Meyer and his team compared the bone to other similarly sized animals that had been found in the same archaeological layer as Lucy, and upon careful examination found a match with an extinct species of baboon. Called Theropithecus darti, this baboon was the most abundant large monkey across the region at the time; a single bone of this baboon species must have been carried by the stream and washed up next to Lucy’s remains.

Meyer and his colleagues confirmed that all of Lucy’s other bones were correctly attributed to her, and as a result, their new research changes nothing with respect to strong evidence for Lucy as a human ancestor, her upright posture, and her bipedal mode of walking. Although scientists are now removing this bone from her skeleton, this research does not undermine Lucy’s importance in the story of human evolution. Moreover, it demonstrates how science works – namely, scientists continue to test ideas, refine them and often times revise what they know about the world.