According to the World Health Organization, more than one million people die every year on the world’s roads, and another 20 to 50 million get injured because of traffic accidents. Sadly, traffic accidents are the first cause of death among people aged 15-29.

Many countries attempt to prevent traffic accidents by fostering implementation of school-based interventions. However, it is difficult to find comprehensive overviews of studies investigating the effectiveness of these interventions. Lack of clear and organised evidence can result in public health policy being misguided and relying only on partial evidence.

Given this research gap, we aimed at examining the reviews that have assessed the effectiveness of school-based interventions in preventing traffic accident or related at-risk behaviour. 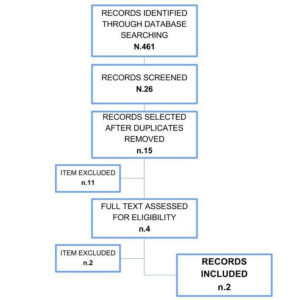 We sought all reviews included in three electronic databases that are widely used in public health research: PubMed, Cochrane Library, Health Evidence. We supplemented this search by inspecting guidelines published by public health agencies in Europe, United States, and New Zealand. We selected all reviews whose population included both males and females younger than 25 and that assessed at least one of the following outcomes: (1) traffic accident incidence and mortality; (2) participants’ knowledge on potential risk behaviours (for example, drink-driving); (3) participants’ perception of risk behaviours; (4) participants’ safe-driving skills. Selection of reviews was carried out independently by two authors and any disagreement was resolved by discussion.

As shown in Figure 1, we selected two reviews after filtering out duplicates and all works that did not fulfil the above criteria.

The systematic review by Roberts and Kwan (published in 2008) is based on 3 randomized controlled trials conducted in the 1980s and involving more than 17,000 high-school students. This review concludes that there is no evidence that road education can reduce the involvement of young people in accidents.

The second review by the U.S. Task Force on Community Preventive Services (published in 2005) is somehow complementary to the former, covering studies published in the 1990s and early 2000s. This review includes both randomized and non-randomized studies, and involves more than 46,000 high-school and college students. The authors of this review conclude that there is no evidence that school-based interventions reduce risk behaviours such as accepting lifts from drunk drivers, and that there are discordant results about the effects of these interventions on drinking-and-driving behaviour.

We believe that we need more studies assessing the effectiveness of school-based interventions to reduce traffic accidents, possibly in combination with community-based interventions. These studies should be (1) large, to be able to capture clear intervention effects and change practice; (2) have a randomized design to reduce risk of bias; and (3) be conducted across different countries to maximise generalizability of the study findings to different lifestyles and policies. Public health policy will thus be able to promote effective interventions, and ultimately reduce the inacceptable death and disease burden generated by traffic accidents.