Are we still on the right track for a new medicine for Chagas disease?

Across 21 countries from Latin America there is a parasite named Trypanosoma cruzi, which causes an illness that is a frightening burden to public healthcare: Chagas disease (CD). The parasite is found in the gut of kissing bugs (popularly called “barbeiros” in Brazil and “vinchucas” in the Spanish speaking countries) and is eliminated in their feces/urine when they feed with the blood of a mammalian, hence contaminating the host. Still, T. cruzi can be transmitted through contaminated blood transfusion, organ transplantation, from mother to child during pregnancy, as well as orally by food accidentally contaminated. People with CD may present some flu-like symptoms in the early phase of infection and after a few weeks it seems that the threat is no longer there. However, the parasite lives hidden inside many different cells and in some years/decades it can cause cardiovascular and/or digestive problems. There is no vaccine for CD and the two available medicines, benznidazole (Bz) and nifurtimox, are toxic and not in all effective. To worsen the case-scenario of more than 6 million infected people worldwide and other millions under risk of infection, CD has been identified in non-endemic areas in Europe, North America, Australia and Asia mostly due to the migratory flow. 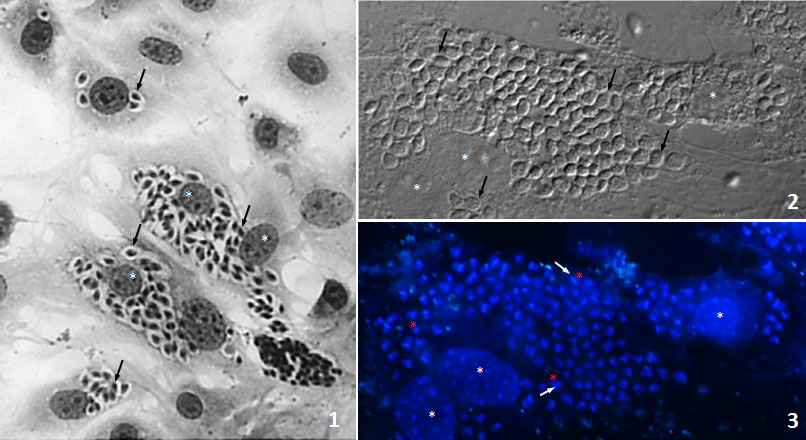 Fig. 1. In vitro studies of Trypanosoma cruzi infection have been performed using primary cultures of cardiac cells. Through conventional light microscopy (1) and differential interference contrast microscopy (2) it is possible to identify this protozoa (black arrows) in the cytoplasm of cardiac cultures. Since many aromatic amidines display intrinsic fluorescence (blue labeling, 3), they can be observed by fluorescent microscopy inside the nuclei of the host cells (white asterisks) and parasites (red asterisks), as well as within the parasite mitochondria called kDNA (white arrows). Original magnification, X630.

The urge for new medicines is evident and our group has been joining efforts to the international research community to try to find a most suitable therapy that could not only kill the parasite, but overall improve the life quality of such patients. For decades we have tested some natural and synthetic compounds, and among the last, we have obtained encouraging results for aromatic amidines using both cell cultures or animal models. Some of these molecules are in clinical use for human and veterinary parasitic diseases. Despite their potency, there is toxicity and then novel molecules are being synthetized and tested to improve their selectivity towards the parasites. In this sense, ten novel aromatic amidines were studied against T.cruzi. One of them, the DB2267 has proven better activity than the reference drug Bz when assayed against the extracellular forms of T. cruzi (bloodstream trypomastigotes) found in the mammalian host, being able to kill half of the parasites in a considerable low concentration. DB2267 has low toxicity to cardiac cells, but fails to eliminate the intracellular and multiplicative forms of the parasite (amastigotes) inside the cardiac cell cultures. Nevertheless, as another tested molecule, the DB2236 promoted such a reduction in the amastigotes population, we decided to combine it with DB2267 to check if together they could prompt parasite death of bloodstream trypomastigotes. The association of the molecules did not show any improvement regarding their isolated activities; neither had it represented any retreat.

Unfortunately, as no compound reached efficacy towards all the parasite forms, none of them were forward to animal testing. However, the information we gathered leads to further studies with optimized molecules regarding their chemical structure, so to keep on investigating more drug candidates for the treatment of CD. As for the combination, we assume that it should be even more considered not only for this family of compounds presented herein, but also to different drugs on trial, once it is a rational strategy that may allow toxicity reduction, decrease parasite resistance profile and improve pharmacological effects. The road is long, but we are still trying to find out the right track.