There are several techniques for monitoring and recording brain activity that do not require cutting tissue or putting devices inside the brain. For example electroencephalography, magnetoencephalography and the functional magnetic resonance imaging are all non-invasive techniques to extract brain information. In the first, electrodes are attached to the scalp according to a specific configuration while electrolyte gel is applied to reduce impedance between contact and electrode. In the second, subjects are introduced to a chamber equipped with an array of high sensitive sensors that measure magnetic fields produced by electrical currents occurring in the brain. In the third, subjects are introduced to a chamber that detects changes in blood flow of particular areas of the brain thus providing anatomical and functional information. Most of these tests are performed while subjects perform some kind of behavioral tasks. 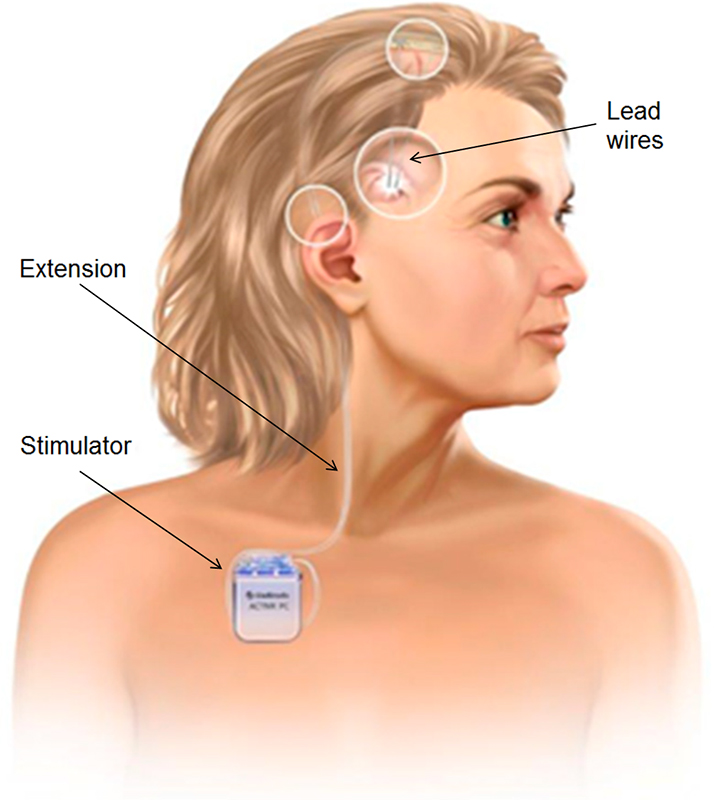 Fig.1. Deep brain stimulation (with the kind permission of Medtronic GmbH): The figure depicts two lead wires that are implanted to deliver electrical stimulation to the target deep brain region. Such wires enable extraction of brain information during their implantation in a first surgery (intra- operatively) and prior to implantation of the stimulator in a second surgery (post-operatively). An insulated wire (Extension) is needed to connect the stimulator with the lead wires.

Nevertheless, there are some parts of the brain that remain inaccessible by the mentioned techniques. In order to get information from these structures two electrodes are directly implanted into the brain. This technique is called deep brain stimulation (Fig. 1). Since the electrodes are wired you can now register brain information from the predefined target regions inside the brain. Such brain information is recorded in the form of electrical signals that oscillate, namely they vary in amplitude and frequency.  Deep brain stimulation is indicated for patients suffering from neurological and neuropsychiatric disorders, such as Parkinson’s disease, obsessive compulsive disorder or chronic disorders of consciousness. This technique provides insight into functioning of the brain with respect to such disorders. In particular, our cognition and emotions are reflected in the recorded brain signals. It is also possible to simultaneously use electroencephalography and the electrodes provided by the deep brain stimulation technique to gain information of deep structures as well as and cortical areas in the brain.