Astrocytes, friend or foe in the brain

Glia, the “support” cells of the nervous system, are vital to the production, maintenance, and repair of one of the greatest triumphs of vertebrate evolution: the myelin sheath. For nerves to receive and conduct signals, as wells as increase the speed at which electrical signals are transmitted across nerves efficiently, they need to be wrapped in an insulating myelin sheath. The support cell in the central nervous system (CNS) is the oligodendrocyte which produces the myelin sheath. Research has largely focused on promoting oligodendrocyte remyelination after injury or in disease and most predominantly these cells have been the therapeutic target in the demyelinating disease, multiple sclerosis (MS).  However, it is now clear that another major glial cell in the CNS, the astrocyte, may regulate myelination. Here we review the dynamic roles of astrocytes in myelination and remyelination following injury or demyelinating diseases. 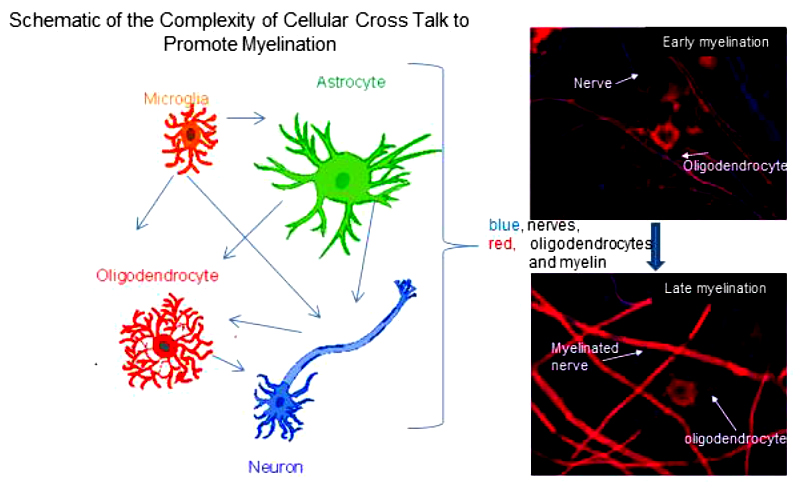 Other astrocytic effects on myelination, however, occur indirectly through their support and maintenance of neurons. For instance, astrocytes are the first contact for glucose crossing the blood – brain barrier, which they store until necessary, and supply to neurons when they are stressed, damaged or if their energy supply is low. Another example is at the synapse, where electrical transmission between neurons occurs. Here, astrocytes influence electrical signals, modulate the environment outside the cells to reduce neuronal toxicity, as well as stimulate cytokine release all of which permit successful myelination.

Perhaps the most prominent astrocytic effect on myelination arises from what is known as the astrocyte “state”. Although the presence of astrocytes can support CNS myelination, after injury or disease conditions they contribute to one the greatest barriers to repair; the astrocytic scar. Here astrocytes change their state to “reactive”, where they enlarge become rigid and aggregate with other cells to wall off the injury site. Although evolutionarily this is thought to have arisen as a protective mechanism to prevent infection and the spread of cellular damage; a side effect is that this scar also prevents nerves to make new connections and inhibits remyelination of damaged nerves. However at present there is debate as to whether the scar is in fact good or bad for CNS repair.

Moreover, emerging data suggests that astrocytes, far from being simply “reactive” or at the opposite end of the scale as “quiescent”, express more of a continuum of states which blurs these dramatic astrocyte states. In fact there is evidence that another astrocyte state exist known as “active” which may be beneficial to repair rather than inhibitory. Cytokines, may be pivotal in these interactions. The cytokine “cocktail” surrounding regions of active or reactive astrocytes provides some clues to the astrocyte phenotype and its role in repair.

There is a long way to go to understand astrocyte behaviour in response to injury, and how this affects myelination and remyelination. There is no doubt that the dynamic nature of astrocytes has long been underestimated. In the search for therapies for demyelinating diseases such as MS, astrocytes may well hold the key.