Back to the future: Italian folk remedies to heal headache (XIX-XX century)

According to the World Health Organization, headache is, nowadays, among most common disorder of nervous system, resulting in serious problems and disability, but it is reasonable to state headache has existed as long as humankind. The purpose of this paper is to bring to light the plant-based treatments utilized by Italian folk medicine, between the nineteenth and twentieth centuries, to heal headache in an attempt to discuss these remedies from a modern pharmacological point of view. Moreover, authors compare the medical applications described by Hippocrates, Pliny the Elder, Dioscorides, Galen and Serenus Sammonicus with those utilized by Italian folk medicine to check if they result from a continuity of use by over two thousand years. 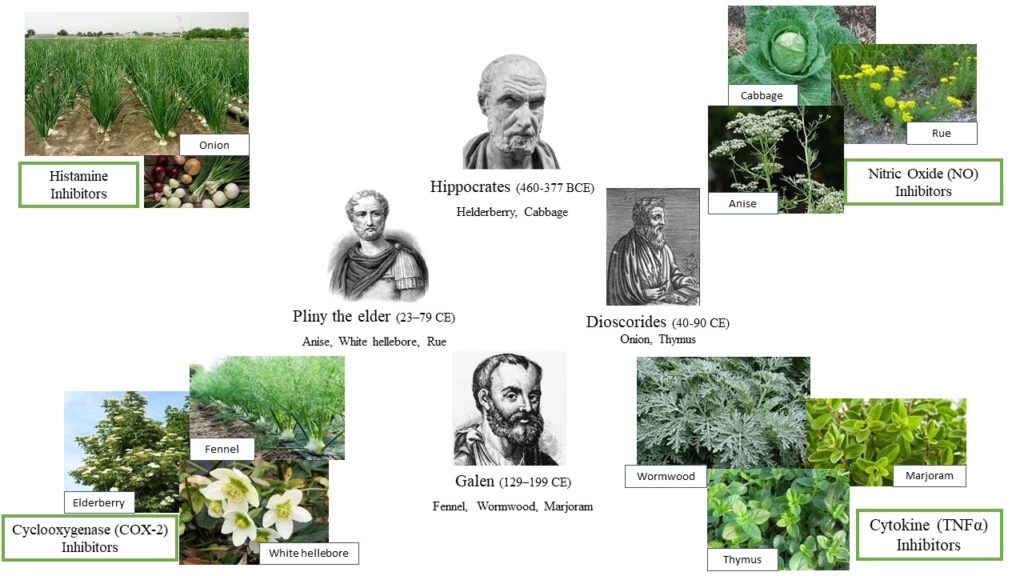 A detailed search of the scientific data banks such as Medline and Scopus was undertaken to uncover recent results concerning the anti-inflammatory, anti-nociceptive and analgesic activities of the plants. In the light of current pharmacological knowledge, about 79% of plants used in the past show, nowadays, secondary metabolites with anti-inflammatory, anti-nociceptive, and analgesic actions that could be useful to treat basic forms of headaches. Active molecules such as flavonoids, terpenoids, phenylpropanoids have shown in vivo, in vitro or in human trials a large spectrum of anti-inflammatory, anti-nociceptive and analgesic activities. For example, diterpens extracted from sunflower, elderberry and wormwood act on mice like NSAIDs (non-steroids anti-inflammatory drugs) that people intake to treat headaches, as well as to reduce the inflammatory state in rheumatic and musculoskeletal diseases. In general, the secondary metabolites show inhibitory activity against the NF-ĸB, NO, COX-2, TNF-α pathways which play an important role in triggering different types of headaches.

Moreover, 41.9% of the plant-based treatments utilized by Italian folk medicine between the late nineteenth and the early to mid-twentieth century to heal headache, were already in use in the period between V century BC and II AD, as evidenced by Hippocrates, Pliny the Elder, Dioscorides, Galen and Sereno Sammonico. So they seem to represent the continuity of the medical tradition over about two thousand years.

The award of the 2015 Nobel Prize for Physiology or Medicine to Prof. Youyou Tu for her discovery and development of artemisinin that is the most effective drug against malaria, gives us a lesson: sometimes it is needed to look back, to look forward.