BC007, first steps of this new drug on the way for future treatment of patients with cardiomyopathy

Dilated cardiomyopathy (DCM) is a disease of the heart in which the heart chambers stretch and thin (dilate). Under this condition, the heart and cannot pump enough blood needed by the other organs need. DCM presents as heart failure: typical signs are shortnessof breath (dyspnea), tiredness, weakness and swelling (oedema) in legs, ankles and feet, reduced ability to exercise often combined with rapid or irregular heartbeat. Despite continuously optimized medical treatment for DCM, often the patient’s last chance is heart transplantation. DCM affects people of all ages, including children, but is most common in men aged 20–60. Annually in the US, 10,000 deaths and 46,000 hospitalizations are related to DCM. In more than 50% of DCM cases, the reason is unknown. However, in this group of patients (idiopathic dilated cardiomyopathy, IDCM) as well as in other forms of dilated cardiomyopathy, such as Chagas cardiomyopathy (nearly 3 million patients in Latin America) and peripartum cardiomyopathy, an uncommon disorder associated with pregnancy (1 case per 2500–4000 live births in Northern America and Europe) antibodies specifically named autoantibodies were found that are today accepted as contributing to the DCM development. Normally, humans produce antibodies for fighting against bacteria, viruses and parasites entering their body. Unfortunately, sometimes humans produce antibodies, called autoantibodies, which fight against the human’s own tissues. In heart patients, there are autoantibodies disturbing the normal heart function (therefore are named functional autoantibodies), causing the death of active heart cells, which are than replaced by inactive connective tissue. Functional autoantibodies are also frequently found in many other diseases indicated by disturbances in the heart and vessels; these include hypertension, diabetes mellitus and even Alzheimer’s disease. As mainly shown for patients with IDCM, patients’ long-term survival is importantly increased if their blood is connected to a machine clearing the blood from the heart-damaging autoantibodies (apheresis). Unfortunately, apheresis treatment is severely limited due to its high cost, logistic problems and patient burden. To overcome this, we developed the drug BC007 (chemically an aptamer) with the aim of reducing in the autoantibody level in the patient’s blood. 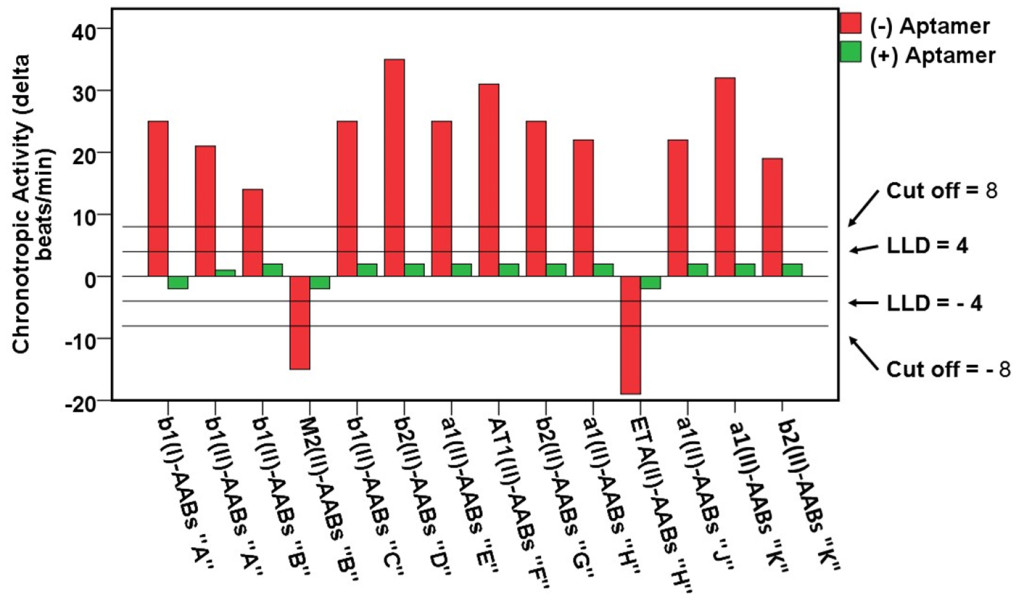 To bring our treatment idea step by step closer to humans, we first demonstrated that BC007 is able to inhibit all the functional autoantibodies presently discussed as being pathogenic in human cardiovascular diseases. For this purpose, we prepared autoantibodies from the blood of patients suffering from diseases of the cardiovascular system.

As demonstrated in Figure 1, the pathogenic activity of the functional autoantibodies (influence on the beating frequency of heart cells) isolated from cardiovascular-diseased patients was strongly reduced after BC007 was added. In the second line of experiments, we treated rats carrying a functional autoantibody directed against the beta1-receptor (a specific receptor necessary to guarantee normal heart function) with BC007. As demonstrated in Figure 2, the blood’s autoantibody loss could be evidenced. Importantly, there was no substantial autoantibody return until study end No toxic side effects of the drug were seen.

Fig. 2. Elimination of β1-AR AABs from blood of spontaneously hypertensive rats (SHR). BC007 was administered five times at weekly intervals (4 mg/kg BW IV) and was followed-up for β1-AR AABs activity for 3 months after the last administration. Control rats received 0.9% NaCl solution.. Rats treated with BC007 showed a continuous decrease of the AAB activity over time. (LLD = lower limit of determination; Cut-off = threshold for pathological β1-AR AABs activity). Reproduced from (Atherosclerosis 2016;244:44) with permission of Elsevier, license number: 3821801308048 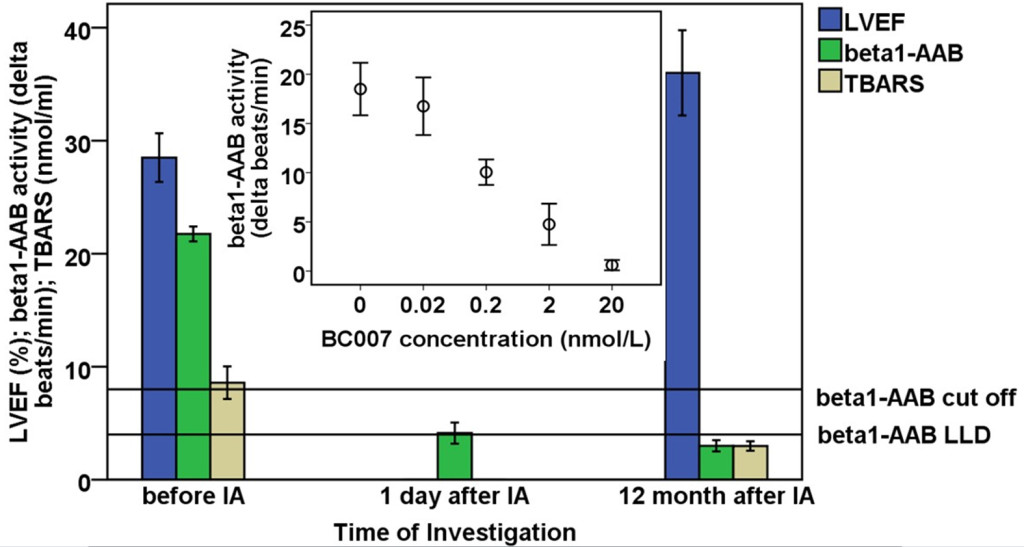 Fig. 3. Lowering of serum autoantibodies directed against the beta1-adrenergic receptor (beta1-AABs) in patients with DCM (n=7). .
Large chart: Human study for the removal of beta1-AABs; data shown are for beta1-AAB vs. LVEF and oxidative stress (measured as thiobarbituric acid reactive substances (TBARS)) before and after immunoadsorption. Small chart: In vitro study demonstrating the concentration-dependent neutralization by BC007 of beta1-AABs in the serum sampled before immunoadsorption. Reproduced from (Atherosclerosis 2016;244:44) with permission of Elsevier, license number: 3821801308048.

Consequently, in our view, BC007 treatment in patients carrying functional autoantibodies should potentially have a comparable benefit as that seen after apheresis treatment. To evidence this, the first human study using BC007 for the treatment of patients with DCM is planned for the near future.