Be careful of podocyte B7-1

Chronic kidney disease (CKD) is a huge global health burden. If not treated promptly, CKD can progress to end-stage renal disease, meaning that kidney function is at below 10% of normal capacity. Under physiological conditions the kidneys filter blood, retaining cells and proteins while removing waste particles. Blood filtration takes place in the renal glomerulus, where podocytes, which are highly specialized cells, play a crucial role in preventing protein leakage into the urine. Podocyte damage and loss are irreversible and cause a massive loss of protein in the urine, leading to many forms of CKD, such as minimal change disease (MCD), focal segmental glomerulosclerosis (FSGS), diabetic nephropathy (DN), and lupus nephritis (LN). Although researchers and clinicians have made significant progress with studying the pathogenesis of CKD and the mechanisms of podocyte injury, current approaches to treating CKD provide (in most cases) only partial renoprotection. 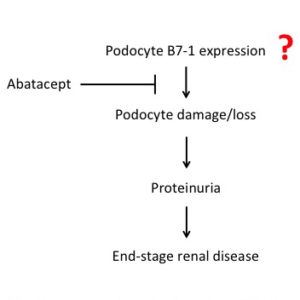 Fig. 1. Illustration of the proposed mechanisms to explain the possible role of podocyte B7-1 and abatacept action in progressive CKD. Subsequent studies questioned both the expression of B7-1 by injured podocytes and the therapeutic action of abatacept.

Searching for therapeutic targets, B7-1 has been proposed as a novel biomarker of podocyte damage and a possible target for podocyte-specific treatments of proteinuria. B7-1 (also called CD80) is a transmembrane protein that is normally expressed by immune cells – and not by podocytes – to stimulate the immune response activation. The study that first suggested that B7-1 may play a role in podocyte injury and proteinuric disease described B7-1 expression in podocytes in response to a wide range of stimuli, including drug and toxic injury, as well as in genetic kidney diseases and in patients affected by LN.

Following this study, elevated urinary levels of B7-1 and its expression on podocytes were described in patients with MCD, while lately, podocyte B7-1 expression was detected in patients with FSGS. Five of these FSGS patients were treated with abatacept, a costimulatory inhibitor of B7-1 that has already been approved for the treating of rheumatoid arthritis by the US Food and Drug Administration. Patients received abatacept in concomitance with or at the end of plasmapheresis treatment, and exhibited partial or complete remission of the disease. This generated excitement in the scientific community: B7-1 was greeted as a new possible podocyte-specific therapeutic target and abatacept as a potential therapeutic approach for patients with refractory forms of proteinuric disease. This enthusiasm was further fueled by a subsequent study that showed that the induction of podocyte B7-1 expression was also induced in patients and mice affected by DN.

However, several other scientists had difficulties reproducing those findings when analyzing and treating other patients. Firstly, B7-1 expression by injured podocytes has been questioned. Numerous studies have consistently reported a lack of podocyte B7-1 expression in experimental models and patients with FSGS, MCD, LN and DN, even though they analyzed a large number of patients and animals and provided convincing method controls to prove the validity of their experimental protocols. Secondly, many studies have questioned the efficacy of B7-1 blockers: patients did not exhibit a positive or lasting therapeutic response. Notably, some patients were reported as being positive for B7-1 podocyte expression, yet treatment did not induce renal disease remission.

In conclusion, the value of podocyte B7-1 as a possible therapeutic target and the potential of B7-1 blockade as treatment for diseases such as FSGS, MCD, DN and LN, remain controversial. The many unanswered questions and the multitude of contradictory findings compel us to be cautious, and develop experimental approaches that can reliably assess B7-1 expression before we propose a treatment with major potential side effects.

The role of B7-1 in proteinuria of glomerular origin.
Novelli R, Benigni A, Remuzzi G
Nat Rev Nephrol. 2018 Sep