Ludwig van Beethoven had multiple medical problems besides deafness for most of his life, and his illnesses are believed to have profoundly influenced his music.   Beethoven himself also thought these physical ailments were responsible for his self-acknowledged behavioral problems.  He never found relief for his progressive deafness or for his other medical problems during his lifetime but remained convinced that someday his miserable condition would be understood.   In his Heiligenstadt Testament, written when he was 32 years old, he begged his brothers to help his doctor discover and publish a medical explanation for his disease after death so that the world could understand and judge him (and his behavior) differently.  This research article by a practicing pathologist puts forth the best evidence to support an explanation that Beethoven desired. 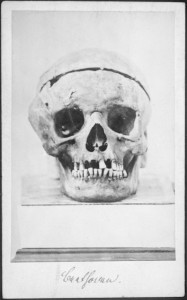 Beethoven died at 56 years of age and an autopsy was performed the day after death by one of the best anatomists of the day, Dr. Johannes Wagner, of the University of Vienna.   This paper carefully correlates the autopsy findings with the many clinical details available about Beethoven’s health during his life from multiple sources, providing the most convincing evidence yet that Beethoven had Paget’s disease of bone (PDB, or simply Paget’s disease) also called  “osteitis deformans.”  This is also the first report that gives the evidence-based explanations for the abnormal sizes of the acoustic and facial nerves found at autopsy, as well as the reason for the extensive calcium deposits in the kidneys.

PDB is a chronic disorder, possibly caused by a measles-type virus in genetically-susceptible individuals, that can result in enlarged and misshapen bones.  Beethoven’s skull was twice as thick as normal, and a photograph of his skull taken at the first disinterment in 1863 shows prominent cheekbones and forehead (Fig. 1., with permission from the Austrian National Library), producing a lion-like appearance, which is known to occur in Paget’s disease.  The bulge seen in the right side of the skull as seen in the photograph may be artifactual, due to an attempt at the time to fill in missing portions of the skull at that point.  Additional evidence of PDB was found by Dr. Wagner when he noted that the facial (“seventh”) nerves were enlarged while the auditory (“eighth”) nerves were shrunken (i.e., atrophied), despite their sharing  a common pathway through the skull, the internal auditory meatus (IAM, Fig. 2., with permission from the Elsevier Publishing Company).  Until this report, the significance of this discrepancy has never been realized, but it is a key observation that secures the diagnosis of PDB.  The seventh and eighth nerves are two of the twelve numbered cranial nerves which, unlike the other nerves which exit from the spinal cord, exit directly through openings in the skull.  The 7th nerve controls the facial muscles and is a well-formed nerve bundle or cord when it exits through the IAM.  However, the 8th nerve is still in a “pre bundled” state and exists as numerous tiny nerve filaments which must pass through as many minute holes or foramina in the IAM before it comes together as another nerve bundle as it enters the cranium to provide the electrical signals of hearing to the brain.  If the bone of the IAM is thickened by PDB, these foramina can be easily obstructed and the small filaments which pass through them are then easily damaged, causing atrophy and death.  The facial nerve was also affected by external compression which blocked its lymphatic drainage leading to gross enlargement of the nerve, as seen in Beethoven’s case. 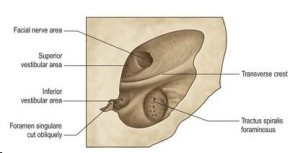 The kidneys were filled with calcium deposits within all the calyces, or collecting chambers for urine within the kidney, secondary to hypercalcemia (high levels of calcium in blood) which is known to occur with PDB, particularly when the patient is at bedrest, a common treatment for many ailments at the time.  PDB is also significantly associated with hyperparathyroidism, the most common cause of hypercalcemia.  The composer was known for his bouts of depression, erratic behavior, and lethargy, all of which are known to be associated with hypercalcemia.  His final months were marked by the complications of cirrhosis of the liver–most likely caused by excessive intake of alcohol–associated with pancreatitis and kidney infections. His immediate cause of death was widespread bacterial infection with organ compromise (septic shock), with kidney abscesses caused by infection introduced by his physicians as they repeatedly drained the abundant intra-abdominal fluid  caused by cirrhosis. There was no evidence of tuberculosis, syphilis, Crohn’s disease or ulcerative colitis, as proposed at various times and by various authors.    PDB and its associated problems, complicated by the use of alcohol and possibly other drugs to relieve the symptoms, can explain most or all of Beethoven’s medical problems.