Perceiving nicotine’s effects in the brain (i.e. interoceptive stimulus effects) helps explain why one billion people worldwide enjoy tobacco smoking and, perhaps, why repeated smoking leads a smoker to becoming dependent on tobacco.  Such effects are typically measured with self-report ratings of “liking”, “satisfying”, etc., but those measures assess hedonic responses to using the drug rather than whether or not nicotine’s effects are perceived in the brain.  Also, self-report responses are subjective effects that, by definition, cannot be objectively verified and so may reflect a participant’s idiosyncratic expectations of effects that should occur due to the substance they believe they have been given.  By contrast, behavioral drug discrimination procedures can be used with humans to objectively determine whether they perceive the interoceptive effects of particular drug conditions.  In behavioral drug discrimination, different drug conditions are administered in separate trials, and a specific response by the participant is reinforced based on that trial’s drug condition.  That way, the participant is “trained” to associate one drug condition with one response, and a different drug condition with a second response.  Then, participants blind to subsequently administered drug conditions show which drug they perceived by what response they emit.

Our study objective was to develop and evaluate an initial procedure to test nicotine discrimination via cigarette smoking, adapting methods from past research with humans and animals.  Dependent smokers (n=29), abstinent overnight from smoking, participated in one study session.  All were first trained to discriminate between two cigarettes differing in nicotine content (16 mg/g vs 0.4 mg/g) and then tested on whether they successfully acquired that discrimination.  We also assessed their self-report ratings and cigarette puff choice to see if those measures related to behavioral discrimination.  Results with the first 20 participants showed only half (50%) could discriminate between the two cigarettes >80% of the time (i.e. ≥ 5 of 6 trials correct), after receiving just 2 training trials prior to testing (as in the prior studies of discriminating nicotine via non-cigarette administration methods).  Once we increased this procedure to 4 training trials, nearly all of the remaining 9 participants were able to discriminate the cigarettes (89%, significantly greater than 50%).  We also found that self-report ratings (Fig. 1) and puff choice (Fig. 2) differed between cigarettes more in those 18 who were able, vs the 11 unable, to discriminate them. 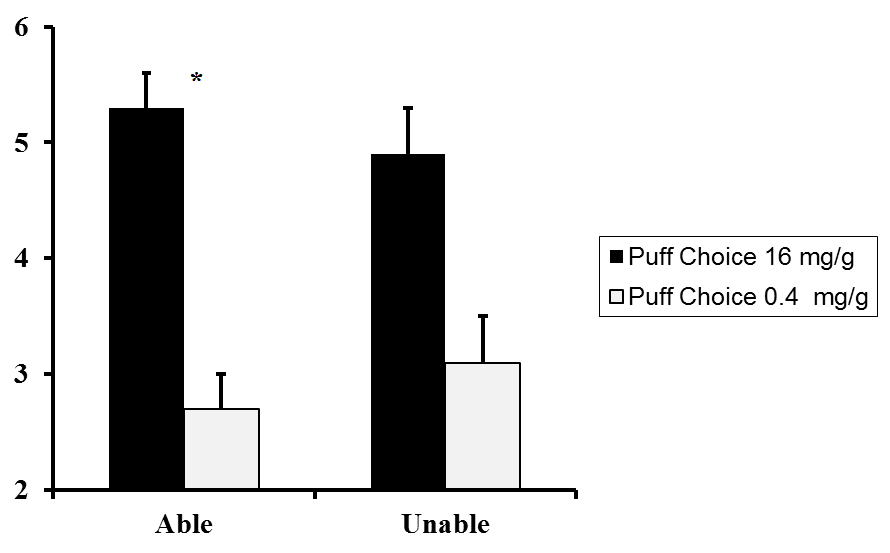 Fig. 2. Figure 2. Mean (SEM) dichotomous puff choices (out of 8 total) for smoking 16 mg/g versus 0.4 mg/g nicotine content research cigarettes, for those able (n=18) and for those unable (n=11) to discriminate the two during the preceding testing trials. * significant difference in puff choice between cigarettes.

This study showed that, with adequate training, smokers can behaviorally discriminate nicotine between cigarettes differing in nicotine contents.   Future research should evaluate human discrimination of nicotine from cigarette smoking in response to other procedural variations.  Improved procedures for testing nicotine discrimination may have broader applications, including informing tobacco regulation policy.  For example, it is conceivable that cigarettes with nicotine contents too low to be discriminated may also be too low to support the onset or maintenance of tobacco dependence.