Bessel-Bessel laser bullets: not that kind of bullet!

A light bullet produced by a powerful laser system, and a metallic bullet fired from a real gun, have at least one sure thing in common: they both may cause real damage to objects and people. But that’s not all! A real bullet fired from a real gun, maintains its shape and size as it travels in air from the muzzle of the gun to the target. It swooshes through the air, essentially without suffering any distortion. Much like a real bullet, what we wish to refer to here as a light bullet is a blob of laser energy, or pulse, that propagates through a thin medium, like air or a plasma, without suffering appreciable distortion by the processes of diffraction and dispersion. A plasma is the fourth state of matter, typically a collection of electrons and positive ions. Diffraction here means light going around obstacles, and dispersion refers to its breaking up into constituent components (or colors) as happens when white light is made to pass through a block of glass or a prism. A light bullet stays localized in space and time. In other words, its intensity (energy it carries through a unit cross-sectional area per unit time) does not fall during propagation. It does not fade away quickly. 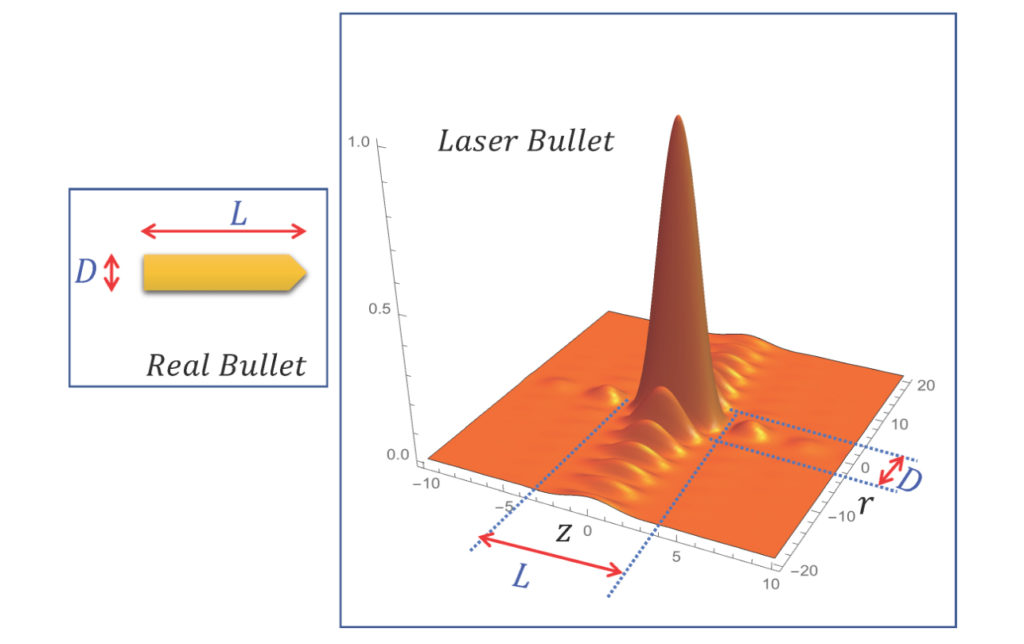 Fig. 1. Left: a schematic of a real bullet of length L and diameter D. Right: Surface plot of the normalized vector potential of a Bessel-Bessel laser bullet, of axial length L and waist radius at focus D, generated at t=0. Direction of propagation is z and r is a lateral (transverse) coordinate.

Laser bullets were predicted almost three decades ago, following discovery of the Bessel beams (so called because a Bessel function of some sort is typically used to model the electromagnetic fields that describe them theoretically). Several theoretical models have been suggested to describe the light bullets as electromagnetic entities. Like Bessel beams, light bullets have also been given names derived from the functions that describe them theoretically. So, in the scientific literature one encounters Airy-Airy Bullets, Airy-Hermite-Gaussian bullets, Airy–Laguerre–Gaussian bullets, and so on.

Like all sorts of light, a laser bullet is described in terms of a set of electric and magnetic fields which satisfy a set of equations that bear the name of the Scottish scientist James Clerk Maxwell. The electric and magnetic fields of a Bessel-Bessel bullet contain two Bessel functions: a spherical Bessel function of order zero, responsible for controlling the localization laterally, and an ordinary Bessel function, which limits extension in the direction of propagation. These functions describe, respectively, the pulse cross-section and its axial extension during propagation. This also places a limit on the pulse duration in time. Since intensity is the energy carried by the pulse through a unit cross-sectional area per second, this quantity remains intact during propagation, typically over many centimeters.

In addition to the energy, Bessel-Bessel bullets have recently been (theoretically) shown to carry linear and angular momentum, which they can impart to an object or material medium when they impinge upon it. For example, colliding a Bessel-Bessel laser bullet with a bunch of counterpropagating electrons has recently been shown, theoretically, to produce a gamma-ray pulse. In particular, since the bullet carries orbital angular momentum (causing it to twist as it moves on) the angular momentum of the bullet gets transferred to the electrons which, in turn, transfer part of it to the emitted gamma-ray pulse. Thus, the twisted bullet produces a twisted gamma-ray pulse.

Fig. 2. (a) Surface plot of the normalized vector potential of a Bessel-Bessel laser bullet, of axial length L=0.8λ and waist radius at focus w=0.9λ, where λ is a central wavelength, generated at t=0. (b)-(d) are snapshots of the same quantity taken at the subsequent times given. Direction of propagation is +z and the transverse extension is represented by the radial coordinate r. For λ=1 μm, (d) shows that the intensity profile of the bullet remains almost intact after propagation over nearly 30 cm.

Different bullet states are labelled by values of an integer index, order of the ordinary Bessel function used to describe it. In principle, that index, perhaps in conjunction with another continuous index employed in the description of the fields, can be used to encode information, to be carried by the bullet, and employ it in digital communication and data transfer. Other applications are envisaged.