Using limitless solar energy to produce artificial energy and chemical fuels from CO2 provide one of the most promising strategy overcoming the depletion of mineral resources on earth and over emissions of carbon dioxide. In nature, such solar-to-chemical energy conversion process can be realized by photosynthesis process, which occurs in highly sophisticated chloroplast platform consisting of precisely arranged light harvesting complexes, protein-metal clusters, and a group of redox biocatalysts to reduce CO2 to carbohydrates through a cascade light-independent reaction in stroma encapsulated by chloroplast membranes. Constructing and applying biocatalyzed artificial photosynthesis system provide promising strategy to store solar energy in a great variety of chemicals. While lack of precise arrangement of these key components in micro/nanostructures with direct interface between light capturing components and oxidoreductases hinders the appropriate trafficking of chemicals and photo-excited electrons into active center of redox biotactalysts. 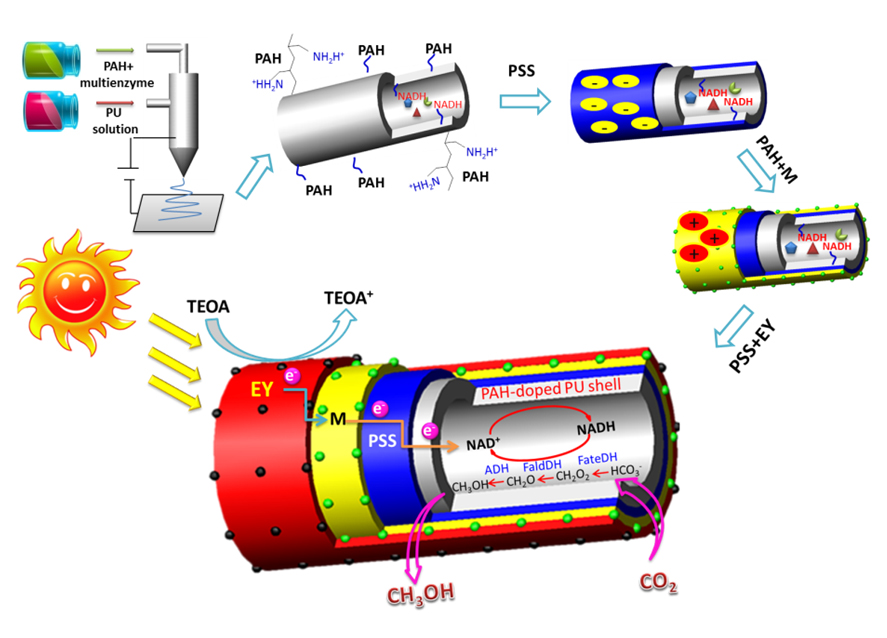 Fig. 1. Illustration of the preparation of integrated biocatalyzed artificial photosynthesis system for solar-energy driven conversion of CO2 to methanol.

To address this problem, we report a completely integrated artificial photosynthesis system with precise arrangement in nanoscale for enhancing electronic energy-transfer efficacy by combining co-axial electrospinning and layer-by-layer (LbL) self-assembly technology (Fig. 1). To mimic the architecture of natural photosynthesis systems, the components involved in the electron-transfer chain were assembled following the order of: redox enzyme systems including NAD(H) in the innermost layer achieved by in situ encapsulated inside lumen of polyelectrolyte-doped hollow nanofibers or microcapsules fabricated via co-axial electrospinning; electron mediator M in the middle layer and the photosensitizer EY in the outermost layer achieved by ion-exchange interaction-driven LbL self-assembly with the help of opposite charged polyelectrolytes.

The feasibility and advantages of this integrated artificial photosynthesis system was fully demonstrated by the three dehydrogenases (formate, formaldehyde and alcohol dehydrogenases) catalyzed cascade reduction of CO2 to methanol incorporating photo-regeneration of NADH under visible light irradiation (Fig. 2). Compared with the solution-based systems, the methanol yield was increased from 35.6% to 90.6% by using the integrated artificial photosynthesis. This phenomenon could be ascribed to the following aspects: Firstly, co-immobilizing the NADH and multiple cascade reduction of CO2 is kinetically advantageous over the separate immobilized systems, because the second enzyme may utilize the product of the first enzyme as a substrate directly at a very high concentration, without the need for this product to diffuse from the first biocatalyst and penetrate to the second one. 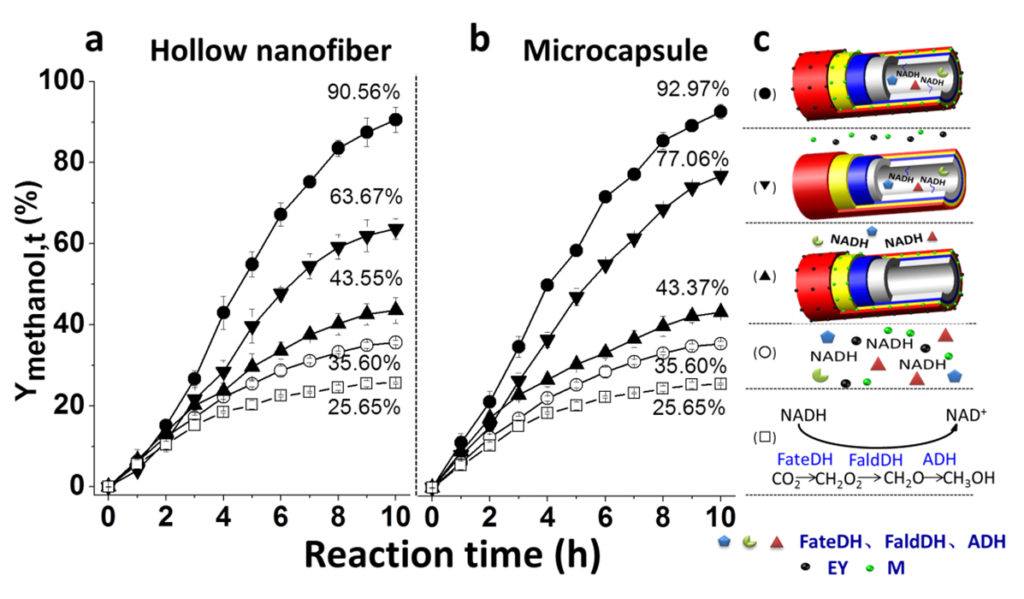 On the other hand, the highly sophisticated self-assembly and precise arrangement of photosensitizer and electron mediator on the surface of hollow nanofibers, while the multi-enzyme system is encapsulated in the hollow chamber, is considered to be the most fascinating and uppermost reason that accounts for this high methanol yield. Such biomimetic nano-architecture provides a direct interface for efficient electronic energy transfer from the photo-excited chromophores (EY) to the electron mediator (M), and then to the redox system for NADH regeneration and cascade CO2 reduction. Both the hollow nanofibers and microcapsule-based artificial photosynthesis system showed similar results, which clearly demonstrated the importance and effectiveness of the spatial organization and integration of these multiple functional components for solar-energy-driven CO2 conversion. Therefore, the solar-energy driven synthesis of methanol from CO2 using the integrated artificial photosynthesis system developed in this study is more promising than ever. Besides, such highly integrated systems also demonstrate an excellent recycling capability, and stability. This work provides a novel platform for efficient and sustained production of a broad range of chemicals and fuels from sunlight.