Cardiac adaptation to intense physical training is determined by many factors including age, lifestyle, body size, training load, ethnicity and sex. Females show a lower cardiac mass than males, the main causes are a lower blood volume and a smaller heart size related to their smaller body surface area. In addition to this, females show more body fat after puberty even adult female athletes show a higher body fat and less fat free mass than male adult athletes in the same discipline.

The adaptations of left ventricular dimensions to exercise training is closely related to body composition and in particular to muscular tissue: during physical exertion, heart pumps oxygenated blood especially to this body compartment.

Skinfold thickness is a simple means of estimating body composition that allows differentiating the body into two main compartments, such as fat mass and fat free mass. A recent study has used skinfold thickness to demonstrate a greater correlation between left ventricular mass and fat free mass compared to body surface area. In addition to this sex-related differences in ventricular dimensions or functions appear less marked, if not absent, when indexing using fat free mass. Body cell mass was defined as the metabolically active tissue of the body where the greatest amount of oxygen is consumed. Therefore, unlike fat free mass, excludes extracellular mass hence, it most accurately reflects the total of all muscle fiber containing cells, including both skeletal and smooth muscle cells. In recent years body cell mass was investigated in athletes, especially in soccer players.

Currently, there are no studies that have taken into account body cell mass in the study of left ventricular hypertrophy. 18 male and 18 female elite soccer players without known cardiovascular disease were included in the study. These athletes had to be Caucasian, practicing at least ten years soccer and at least five years at elite levels. All athletes belong to the same team in the same city, trained with the same load and frequency and had the same lifestyle.

The samples were subjected to body composition assessments with skinfold thickness (fat free mass) and bio impedance analysis (body cell mass). After they underwent a trans-thoracic echocardiography conducted by experienced cardiologists. Body composition parameters and Body Surface Area (BSA) were greater in males with the exception of fat mass. Also body cell mass and hydration were greater in males. Water distribution in females has a more percentage in extracellular component.

All the echocardiographic values were within the normal range. Male soccer players showed significantly higher values than female in all parameters regard left ventricular dimension. The systolic (Ejection Fraction) and diastolic (ratio between transmitral flow of E wave and A wave peak velocities, isovolumetric relaxation and deceleration time) parameters showed a normal pattern in both groups and no differences were observed between sexes.

The indexing has been used in order to normalize these differences according to the amount of body mass and body composition.

The index for body mass parameters (weight, fat free mass, body cell mass) leads a gradual reduction of these differences that always ends up with a reversal of magnitude, with the female athletes with higher parameters compared with male athletes. The strongest relation appears between the LVM and body size variables with r around 0.8 and r2 around 0.7 (Fig. 1). 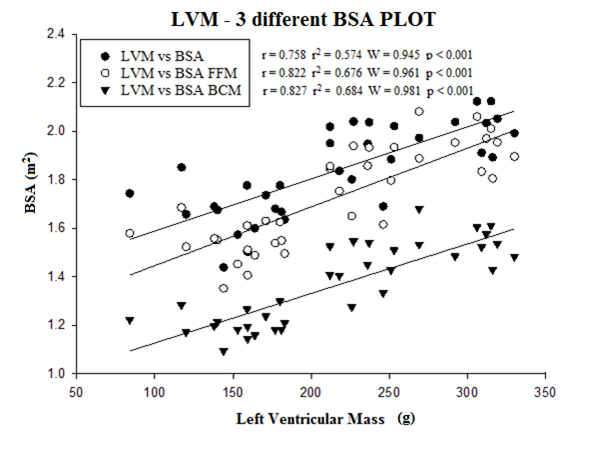 The three-compartment study of the body composition shows that the similarities are in extracellular mass where hormonal activity has a similar action between young adults males and females.

Body composition must be considered for proper indexing of left ventricle parameters, in this context the use of the metabolically active mass of the subject may be a new direction.