Obstructive sleep apnea (OSA) in children is a common clinical problem that causes obstruction to breathing during sleep. Affecting one in ten children, the growing prevalence of this problem has attracted national attention. The hallmark of OSA is snoring, which is a sign of resistance to airflow. The definitive test for OSA is polysomnography, also termed a sleep study. 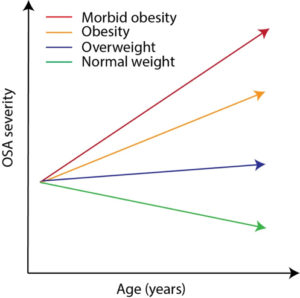 Fig. 1. Summary of results. In this figure, the relationship between age and OSA severity is shown as a function of body weight. While the green line, representing children with normal body weight, illustrates a declining trend in OSA severity with age, children with severe obesity (red line) displayed a heightened risk of worsening OSA over time.

Previous studies have shown that most children with OSA may be cured by removing their tonsils and adenoids (tonsillectomy and adenoidectomy), which are the most likely sites of airway obstruction in healthy children with a normal body weight. Unfortunately, the growing epidemic of childhood obesity has potential to complicate the treatment of OSA. Where obstruction was mostly the result of enlarged tonsil and adenoid tissue alone, obesity introduces additional narrowing of the airway. Thus, although tonsillectomy and adenoidectomy still provides significant benefit in these children, the success rates are not as striking as in children with normal body weight. In addition, age also plays a role as airway dimensions change constantly as a result of growth and development.

In order to explain the relationship between body weight and severity of sleep apnea, Scott et al. (2016) investigated a group of children between the ages of 2 and 18 who underwent a sleep study to determine the severity of OSA. These children were then categorized as normal weight, overweight, obese, or morbidly obese. The severity of sleep apnea is gauged by apnea-hypopnea index (AHI), a measurement representing the number of episodes of airway obstruction per hour of sleep.

The authors highlight a complex relationship between OSA severity and body weight. The study illustrated that the most affected children are likely to be both older and obese. Not surprisingly, the quality of sleep as well as its structure were also altered in obese children. Obese children spent less time in restorative sleep.

This study emphasizes a number of important issues. First, despite the complexity of interaction between age and body weight, older obese children were likely to have the most severe degree of sleep apnea. Next, notwithstanding the degree of airway obstruction seen in obese children, both structure and quality of sleep were affected in these children. The lack of restful sleep in these children may be particularly detrimental to learning and overall brain development. Surprisingly, the most reassuring finding from the study is the overall trend towards resolution of OSA in children with normal body weight, over time.