The rapid rise in the dependency on cigarette smoking in the United States occurred in the first half of the 20th century fueled by large mass media marketing campaigns and the provision of free cigarettes to troops during world wars Lung cancer rates also rose rapidly and the attributable fraction caused by smoking was over 90% with a lag period of 16 years. Lung cancer is modeled well by the duration of smoking (initiation, cessation) as well as it’s intensity (average daily consumption) For those who start smoking, half of the health consequences experienced by continuing smokers will be avoided if smoking cessation occurs prior to age 50 years. 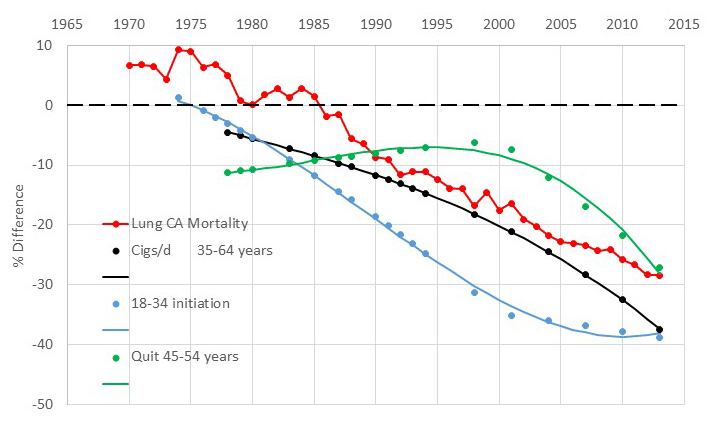 Fig. 1. Trend in the Percentage Difference in Lung Cancer Rates and Smoking Behavior Metrics in California vs Rest of United States. 1970s to 2012-14.

The US public health authorities accepted that smoking caused lung cancer in 1964 and states began taking action to reduce cigarette smoking. California, which at the time, had a higher cigarette consumption than the rest of the nation, was one of the first to implement aggressive tobacco control policies starting with a large tax increase in 1968. In 1989 it implemented the first comprehensive tobacco control program with an aim to change the social norms around smoking. In 1994 it led the world with statewide laws for smoke-free workplace and smoke-free schools law. This paper considers the three critical smoking behaviors (initiation, intensity, cessation) that can impact lung cancer.We used the national Surveillance, Epidemiology, and End Results (SEER) Program to obtain lung cancer mortality data from 1970-2013 separately for California and the rest of the nation. Using the 1974-2014 National Health Interview Surveys (n=962,174), we used regression models to examine trends in the three smoking behaviors that influence lung cancer (how many people start, the amount they smoke, and the age they quit) again for California separately from the rest of the US.

Lung cancer mortality was higher in California than the Rest of the US from the start of this series in1970 until 1986 (Fig. 1). However, 1987 through to our last data point in 2013, California lung cancer mortality rates declined consistently more than in the Rest of the US, with the gap increasing at a consistent rate of .0.93%/year so that by 2012-13, California rates were 28% lower and by 2020 this gap was expected to be 35%.

Tab. 1. Smoking Behavior Estimates for California and the Rest of the United States in 1970s and 2012-14