Can eradication of a bacterium in the stomach increase the platelet count in patients with chronic ITP?

Platelets are blood cells that play a major role in causing blood clots to form and preventing excessive bleeding so their reduction or dysfunction can result in bleeding and even death. These cells are made in the bone marrow. There are different diseases involving platelets one of which is ITP.

What is ITP disease? In short, after a few weeks of viral infection and recovery, a small number of people (children) develop widespread petechiae and ecchymoses on the skin called purpura. This is ITP disease in which the immune mechanism is involved and antibody-mediated platelet destruction occurs in the patient’s body. The result is reduced platelet count and red blood spots under the skin or even dangerous bleeding in vital organs such as the brain. The disease often gets better within a few months but sometimes lasts for more than a year which is called chronic ITP. 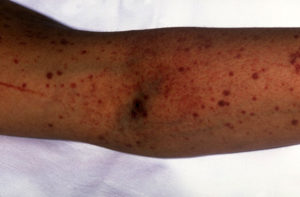 On the other hand, there is a bacterium in the stomach of some people called Helicobacter pylori. The prevalence of this infection in people who live in developing countries is higher and sometimes reaches to 50-40 percent.

Some studies show that H. pylori eradication therapy improves the platelet count in people with chronic ITP also infected with this germ in their stomachs. However, other studies have proven otherwise. How H. pylori infection causes persistent thrombocytopenia (reduced platelet count) in these patients is related to the immune system.

The present study was conducted during 2010-2011 in the Department of Pediatrics of the University of Zahedan- Iran. The aim of this study was first to determine the prevalence of H. pylori infection in a population of 23 patients with chronic ITP (less than 20 years of age). It was found that there was concurrent infection with this germ in 10 patients and 13 patients were infection-free (prevalence of 44%). It is notable that there was no statistically significant difference between the two groups in terms of age, sex and other relevant parameters. Secondly and most importantly, whether eradication therapy in patients with concurrent infection with this germ can improve platelet count? 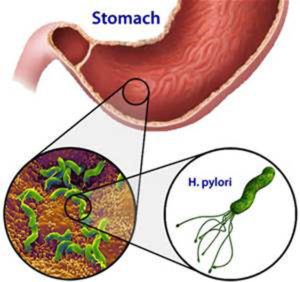 The study also found that eradication therapy was successful in 8 patients (of 10 patients)  and after 6 months their platelet count increased significantly compared to the baseline (pre-treatment) as well as compared to 13 people who did not receive any medical treatment.

It should be also noted that infection of the stomach with H. pylori can be proven by several laboratory test methods, including H. pylori stool antigen test and 13C-UBT and these methods were used in this study.

The conclusions of the study are as follows: Firstly all patients with chronic ITP are recommended to be screened for the infection and secondly eradication therapy of the germ is conducted in the positive cases. This conclusion is valuable and interesting because eradication therapy of H. pylori in cases where there is infection with this germ, many problems of patients with chronic ITP may be alleviated and their hospitalization and medication needs can be reduced.

In the end, it’s worth noting that if other researchers conducted long-term studies on a larger population of patients with chronic ITP and demonstrate that after several years of treatment the platelet count in the treated patients (eradication therapy) is high it would be surely added value to the present study.