How can we uncover how past societies responded to and accommodated changes in their physical environment?  It is an important question, because climate change as well as natural events such as droughts, earthquakes and volcanic eruptions could have serious consequences today. Knowing how past societies responded can inform contemporary planning and policy making – provided the past is properly understood!

Our group, the Climate Change and History Research Initiative, explores the ways in which history as a humanistic discipline converges with the environmental sciences that focus on the past (“palaeo-science”) and works on creating a model of research collaboration and integration of data that future historical-scientific teams could apply in their own work.

Interactions between a society and its environment are not simple. Paradoxically, many societies developed precisely in locations where the environment was difficult to control – complex, settled cultures first arose in flood-prone river basins, for example, suggesting that overcoming environmental challenges contributed to their development.

History as a conceptual laboratory
Finding some past environmental event through proxy data and linking it to a high-profile change in the archaeo-historical record is easy: the collapse of Bronze Age civilizations in the Mediterranean, the end of the Classic Maya period, or the fall of Rome have all been ascribed as much to significant climate changes as to socio-environmental interactions.  Increasing awareness of environmental change and degradation has actually popularized theories of catastrophic collapses.

Such interpretations, however, not only tend to minimize the complexity of the causal relationships involved, but also encourage a simplistic approach to contemporary problems.   The historical record provides a laboratory in which natural and social scientists can test such hypotheses together.  Instead of following such narratives, scientists, historians and archaeologists can work together to identify the severity, abruptness and duration of past environmental changes as well as the responses of affected societies. By reconstructing the complex interactions between societies and past environmental changes, we gain a better understanding of the actual impact of societal responses – and this can better inform current policy debates.

Improving integration
It is common for palaeoenvironmental studies that analyze broad chronological and geographic ranges for which there is little available archaeological or historical data to mistake correlation for causation and argue for environmentally-triggered societal collapse. Yet critical research has demonstrated that societal decline or collapse is never caused by a single factor. While the environment can adversely affect a given society, the interaction between them is complex, malleable, and produces different impacts on different groups within the society.

Integrating archaeological, documentary and palaeoenvironmental data is crucial to developing explanations that involve more than one cause, but neither historians nor natural scientists nor archaeologists can do this by themselves, partly because of their very different training emphases and research methodologies (Tab. 1). Thus it is crucial that studies involve teams consisting of members of each of these disciplines. 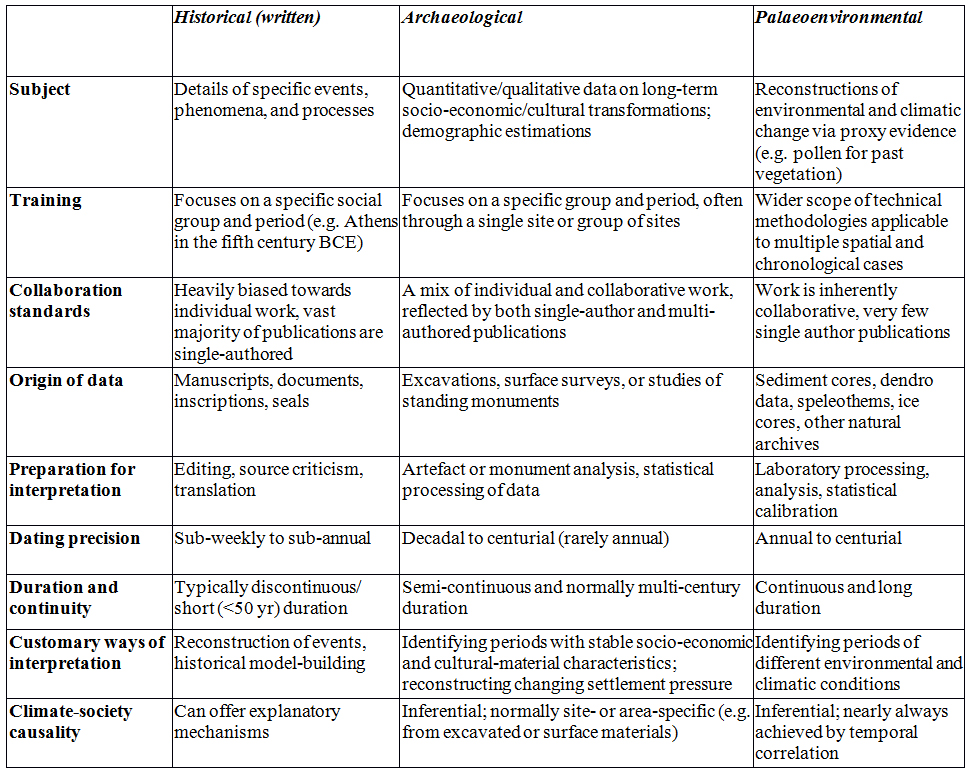 Our research indicates four benefits to integrating history, archaeology and palaeoenvironmental science: (1) it stimulates innovative questions and new insights; (2) it reveals more complex sets of causal interrelationships; (3) the results often challenge existing interpretations of historical processes; and (4) more detail and nuance in understanding tipping points in past socio-environmental systems are uncovered – and thus  a better appreciation of past societal responses to environmental change and the replacement of well-worn narratives of collapse.

Multidisciplinary analysis of the interaction between past societies and the environment is directly relevant for 21st-century debates about climate change and its effects.  With a better appreciation of the past, contemporary policy-makers can develop more resilient strategies to tackle the challenges of our changing environment.