Gestational diabetes mellitus ( GDM ) has become a major public health concern whose prevalence is increasing globally , together with the increased rates of obstetric and neonatal complications. Notwithstanding this evidence, a worldwide consensus about the diagnostic criteria for GDM is still lacking. In 2010, the International Association of Diabetes and Pregnancy Study Group (IADPSG) panel recommended a universal oral glucose tolerance test (OGTT) for the diagnosis of GDM, which employs more rigorous cut-offs of glucose level. However, although adopted by several international medical societies, this recommendation is not universally followed, and there are indications for a more selective risk-profile-based screening which may prevent the overdiagnosis of GDM, and limit healthcare system’s costs. A selective screening based on the risk profile of pregnant women has been recently adopted by the Italian National Institute of Health (ISS). While recommending against screening of women at low risk for GDM, these new guidelines recommend an early test (16-18 week) for women at high for GDM. In our study, we assessed the accuracy of Italian guidelines and developed a new index that shows a better performance in predicting risk assessment of GDM. 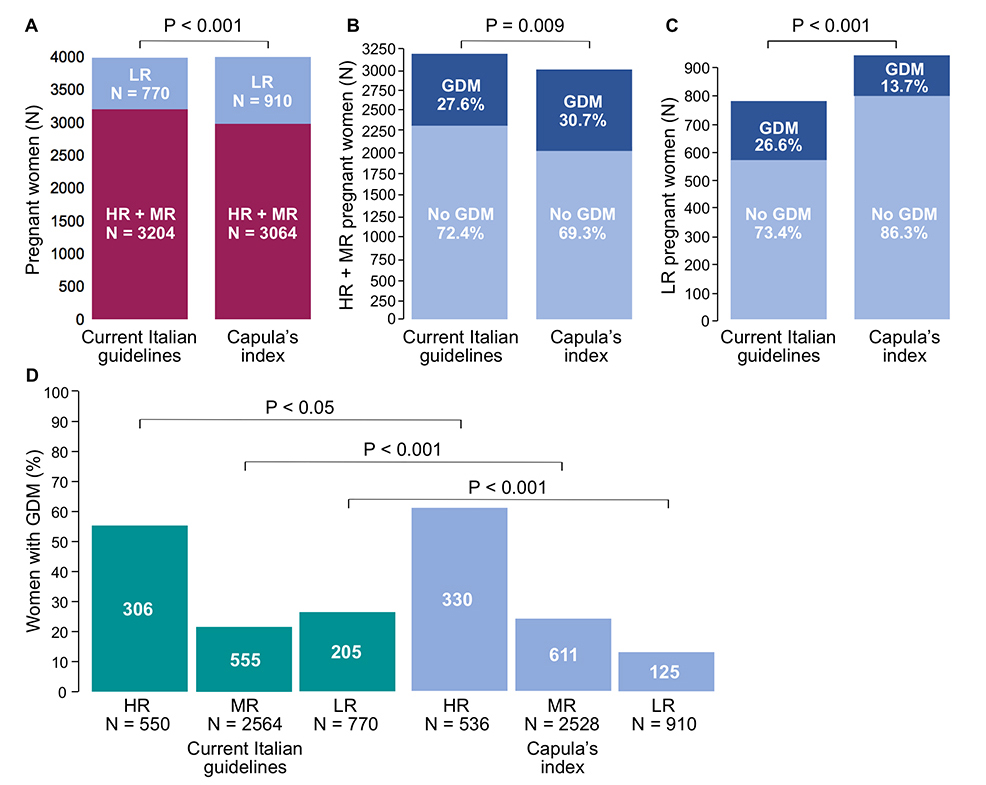 3,974 pregnant women were retrospectively enrolled in Calabria (Southern Italy), during the period August 2011–January 2015. Enrolled women were classified on the basis of the risk profile established by the ISS, and screening for GDM was performed at 16–18 week and/or 24–28 week of gestation by a 75-g OGTT. Diagnosis of GDM was made by applying IADPSG criteria (fasting glucose ≥92 mg/dL; 1h OGTT glucose ≥180 mg/dL; 2h OGTT glucose ≥153 mg/dL), and data were analyzed by specific statistical tests applicable to the various sets of data.

Our results indicated that 55.6 percent (306/550) of women considered at high risk had GDM; however, only 38.3 percent of them (211/550), according to Italian guidelines, underwent early screening. Among 2,654 women at medium risk, 555 (20.9 percent) had GDM; paradoxically, among 770 low risk women, that would not have been screened, 26.6 percent (205/770) received a diagnosis of GDM. Thus, these data indicate that an unnecessary test is recommended by the current Italian guidelines to approximately 80 percent of pregnant women at medium risk, while it failed to identify GDM in more than 5 percent of cases. Based on these unsatisfactory results, we elaborated a new predictive index, the Capula’s index, from our late coworker, Dr. C. Capula. The new index was defined as: Constant – 2.2532 * (Age/10) + 0.4128 * (Age/10) 2 + 0.0795 * pregravidic BMI, where Constant is an intercept value, depending from the presence of previous GDM, polycystic ovary syndrome, and fasting plasma glucose between 100–125 mg/dL (5.6-6.9 mmol/L) before pregnancy. See Capula et al. (Prim Care Diabetes, 10: 315–323, 2016) for an explanation of how the index was created.

Capula’ index significantly reduced both the number of screening tests (Fig. 1A), and the number of potentially undetected GDM cases (Fig. 1B). Also, it reduced the number of potential false negative women (Fig. 1D), and rectified the paradoxical prevalence estimates of GDM obtained with the current Italian guidelines (Fig. 1D). Furthermore, it improved correlation of GDM risk profile with obstetric and neonatal adverse events, thereby reducing the impact of GDM on pregnancy and healthcare cost perspectives.

In conclusion, Capula’s index appears as a promising tool in the management of GDM screening. Further studies are needed to establish its predictive value in other populations.