Chagas disease (CD) is transmitted by the parasite Trypanosoma cruzi, and was discovered in 1909 by the Brazilian medical doctor named Carlos Chagas. Until today, CD remains a serious public health problem, with more than 7 million people affected mostly in poor areas of Latin America although it becomes also a concern in Asia, North America and Europe due to migration of infected individuals to these non-endemic regions. CD is responsible for more deaths worldwide than any other infectious heart disease but the available therapeutic options are limited two old drugs that cause side effects and are not effective during the later disease stage (chronic phase). 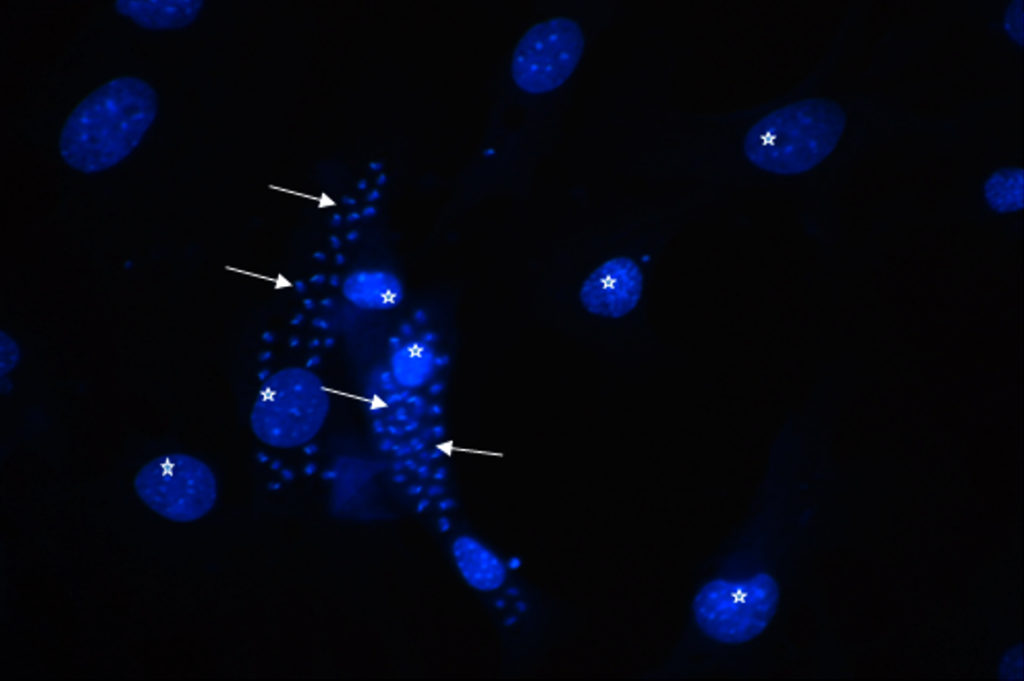 Fig. 1. Fluorescent microscopy photograph showing in blue the nuclei (asterisks) of mouse heart cell cultures grown in vitro and infected with Trypanosoma cruzi (arrows) that are localized inside the cardiac cells The labeling of DNA was done using a fluorescent stain named DAPI (4′,6-diamidino-2-phenylindole).

Another issue is that less than 1 % of the patients have access to the treatment, demonstrating that new pharmacological agents are urgent need to treat the infected person but also to improve the drug access. Our laboratory studies include the discovery and development of new anti-parasitic compounds using different methodological approaches. In this sense, we evaluated the potential activity of new lipid inhibitors, imidazoles molecules named VNI and VFV against the parasite that causes CD. These molecules act on the production of the parasite lipids that are different from those present in mammalians and are essential for their survival and proliferation. We explored the efficacy profile these inhibitors using experimental animals (female and male mice) under the administration by different methodologies and periods of therapy. Regardless of the scheme or delivery vehicle that was used, VFV was more potent for both genders, causing >99.7% of decrease in the animal parasitism, while the VNI reduced from 91 to 100 %. Both inhibitors gave 100 % of animal survival but no parasitological cure evaluated by molecular techniques. Our results support further investigations of this class of compounds, aiming to search for new therapeutic alternatives for millions of chagasic patients.