A common way to measure the quality of academic research is counting how frequently it is cited. Citation counts are used in making decisions, including hiring and promotion, awarding grants, evaluating academic departments, and purchasing journals. To understand why authors cite specific references, we asked the lead authors of 99 research articles in psychology and biology to rate every reference in their article for its importance to the research paper using a scale of 1 (slightly important) to 7 (absolutely important). We also asked them to indicate the primary reason for that reference, as well as their relationship, if any, to the cited author.

So what determines importance?

Frequency, Length, and Citation Reasons
The average rating for importance was approximately 5, indicating that most authors thought the citations were important for their paper. On average, 83% of citations were listed only in parentheses or by a reference number, with no specific mention in the text, and another 10% were barely mentioned in the text. A more important reference was cited more frequently. Importance was also related to the number of words (citation length) used to describe the citation.

Other Factors Affecting Importance
Two factors qualify conclusions about importance based only on indicators such as frequency, length, citation reasons, and location.

Self-citations
Almost 10% of citations were self-citations, and another 10% were citations to authors with whom the citing author had collaborated. Location and quantitative measures of a citation predicted the author’s assessment of importance better for non-self-citations than for self-citations. Participants often judged their own prior research as very important for the current article even if they cited it just once, in the introduction, as general background without any elaboration. The following graph illustrates this pattern. 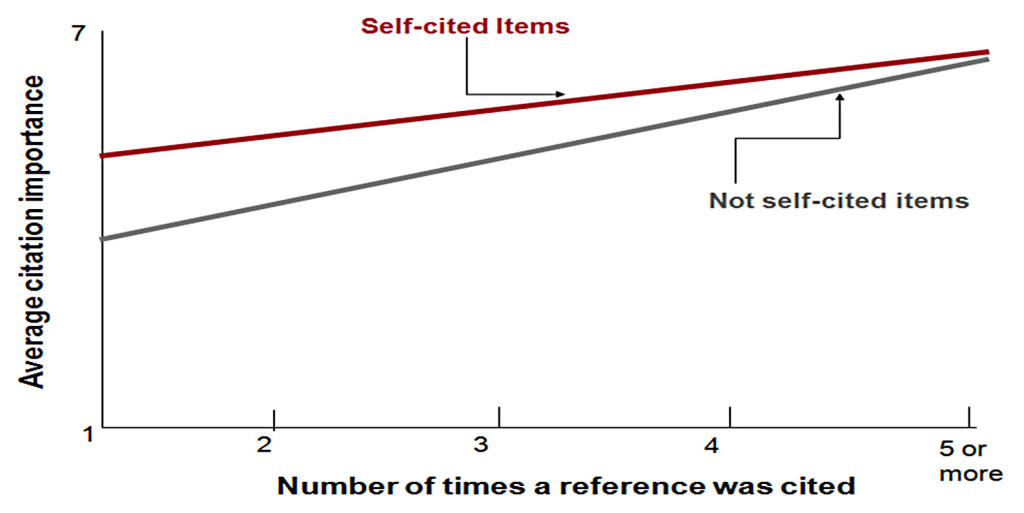 Self- versus Non-Self citations

Implications
In searching the literature in a field, citation-based retrieval supplements term-based retrieval by finding an additional 25% of relevant documents. We suggest information retrieval systems and bibliographic databases include more citation metadata information such as where the citation occurs and how frequently it was cited within a given article.