To maximize fitness, migratory organisms must choose the best place and time to perform their fundamental activities in the face of unpredictable variation in ecological conditions. Because natural selection strongly penalizes the individuals that fail to synchronize their activities with current environmental conditions, species have evolved to track cyclical or otherwise predictable changes in ecological settings. In contrast, fluctuations over shorter periods of major ecological factors that heavily affect most organisms, like temperature or precipitations, may occur rather unpredictably. The need to accommodate such stochastic fluctuations is the apparent evolutionary reason why many organisms have retained some level of temporal flexibility in the time schedule of their activities (‘phenology’). 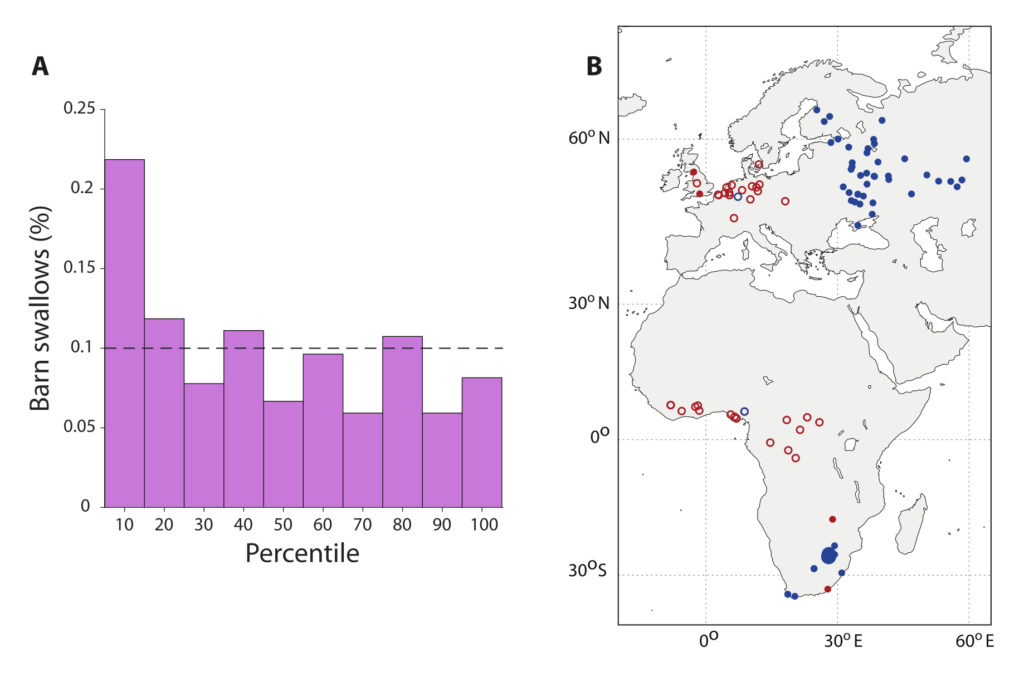 Plants and resident animals can directly sense the progress of seasonal variation in local ecological conditions, while migratory animals that periodically move over large distances have no direct clue as to the conditions that they will experience along their migration journey and at destination, weeks to months later. Migrants are therefore particularly susceptible to environmental uncertainties and, consequently, to the negative effects of human-driven, rapid climate change. The fitness advantages of appropriate timing of life-history events, however, is expected to select the ability to capitalize on any environmental cue that allows buffering the negative effects of unpredictability, for instance, large-scale climatic connections between distant geographical regions.

Together with our colleague Nicola Saino, we used information from ringing data for 270 barn swallows Hirundo rustica that were captured during breeding in Europe and were later recovered during wintering in Africa (or vice versa) during the period 1930-2009. We tested if correlations exist between temperatures in the wintering sites in sub-Saharan Africa just before the start of northward pre-nuptial (‘spring’) migration and the temperatures at their individual breeding sites in Europe at the time of spring arrival from migration, several weeks later. We found that such correlations do indeed exist, suggesting that migrants may obtain information on the temperatures at destination while they are still on their wintering grounds. Such time-lagged temperature correlations were not generally very strong, as could be expected. However, mild advantages arising from tuning migration schedules according to proxies on future conditions at destination can provide a selective advantage.

We also found that temperatures in the breeding European sites of individual barn swallows at the time of arrival from spring migration have significantly stronger correlations with those in their wintering sites than with those in any other locations in sub-Saharan Africa. This suggests that the choice of the wintering location might be aimed to maximize the information on annual conditions at the breeding site that is available before the start of migration. Notably, the sign of the temperature correlations between the wintering and the breeding sites varied between geographical barn swallow populations that could be identified based on previous analyses of migratory connectivity. Western European barn swallows often winter in equatorial Africa and experience positive temperature correlations whereas Eastern European barn swallows winter in southern Africa and experience negative correlations.

Our results lead to hypothesize that other migratory species may use information from environmental cues at one end of their migration journey to adaptively modulate their migration phenology. In addition, they suggest that the existence of time-lagged climatic correlations can have a role in shaping the evolution of migration strategies, in the choice of the wintering sites and, ultimately, in the evolution of migratory connectivity. Whether this will boost the ability of populations to cope with the effects of current climate change or not, will largely depend on whether differential climate change in the breeding and in the non-breeding staging areas disrupts the existing climatic correlations between them.