Meat is a highly perishable product. At its production chain, the physicochemical and microbiological quality of meat can be deteriorated because of the physiological status of the animal at slaughter, the spread of contamination during slaughter and processing, temperature and other conditions of storage and distribution. The industrial process involving washing and cutting promotes cross-contamination. The microbial flora involved in the alteration of the product, allowing a reduction of the storage period and potential health problems for consumers. The pathogens that can contaminate meat are numerous but their impact at human health is different. Immunocompromised patients are the most concerned category, due to their vulnerability to opportunistic infections, in addition to normal infections that could affect everyone. Enterobacteria, despite their insignificant contribution to the spoilage flora in meat and meat products, they are considered as food security indicators. E.coli, Listeria, Salmonella are among the most worrying pathogens.

The most important challenge for the industry is to apply technology to maintain the quality of processed meat during storage. Up to date, the preservation of meat is carried out by the addition of chemical preservatives or heat treatments. Indeed, nitrites are still used by industries. A major concern for processed meats marketed as natural is that they do not contain nitrite. Therefore, investigations are directed to the substitution of this chemical agent by other preservation methods. Most studies in this context could not offer reliable solutions that do not change the organoleptic properties of the final product and spreading the synthesis of chemicals.

The idea of this research project was to develop methods able to insure meat safety without affecting the physicochemical and nutritional value by evaluating the effect of combining marinating (containing natural spices and vegetable extracts) and γ-irradiation at low doses of 1, 1.5 and 3kGy on E.coli O157:H7, S.Typhimurium and C.sporogenes in raw meat packed under vacuum and stored at 4°C and to estimate its safety and shelf-life. Further, the effect of combined treatments on sensorial, nutritional values (lipid oxidation, concentration of thiamin and riboflavin) and color was evaluated.

Thus, meat loins were inoculated by the selected microorganisms. Marinade was added to the meat surface and meat were packed under vacuum and kept at 4°C during 24h to allow the marinade reacting with bacteria. The appropriate samples were then irradiated at 1, 1.5 or 3kGy and refrigerated prior to analyses day. Meat control were prepared in the same way as described previously but without irradiation and marinating. The counts of E. coli, S. Typhimurium and C. sporogenes were performed on specific media during 28 days of storage.

Results of this study clearly demonstrated that marinating can act in synergy with γ-irradiation when done under vacuum packaging of meat in order to assure food safety. A synergetic effect between irradiation (1.5kGy) and marinating was highlighted for their bacterial inactivation. As observed in Figure 1, the shelf-life was also increased by 9 more days as compared to untreated meat and by 3 more days as compared to irradiated meat at 1.5kGy without marinating. 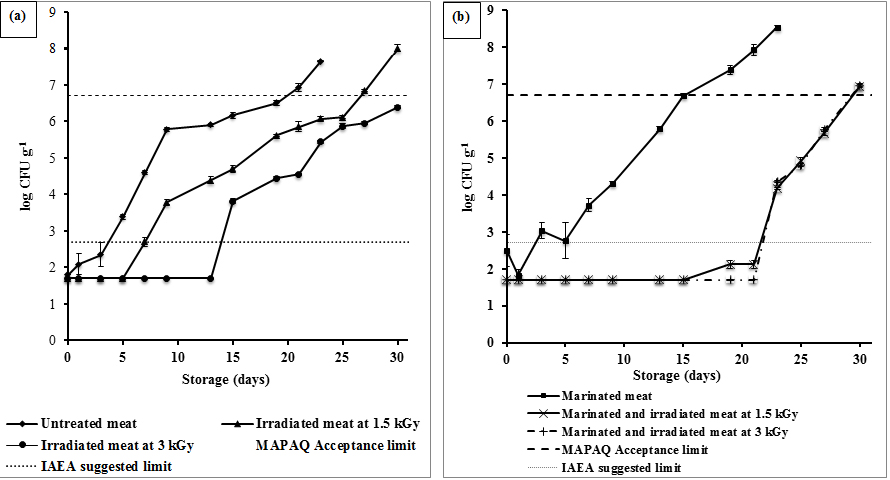 Fig. 1. Effect of γ-irradiation on the TMF counts in (a) non-marinated and (b) marinated meat stored under vacuum at 4 °C.

The evaluation of the nutritional and the physicochemical quality of meat showed that applying combined treatment didn’t affect the vitamins contents, lipid oxidation and sensorial quality of meat. In fact, the use of marinating allowed preventing lipid oxidation during irradiation treatment and storage. Marinating and irradiation were also able to increase the redness of the meat. These results can be of great interest to food industry for food preservation and especially for immunocompromised patients who are condemned to eat foods with low nutritional values caused by the harsh decontamination processes.