Complexity and behavioral diversity in evolving populations under uncertainty

Evolutionary Game Theory – an application of game theory to evolving populations in biology, introduced by Maynard Smith and Price in 1973 – provides a mathematical framework describing dynamics of competition and strategic behavior according to Darwinian natural selection principle. Over the last 50 years, the theory has helped us understand a wide range of biological and social phenomena such as the evolution of cooperation and eusociality and dynamics of collective action. In complex biological and social systems, individuals interact with innumerable others simultaneously and might have different preferences or interests, leading to the adoption of distinct strategies. Moreover, individuals’ interactions are often affected by the constantly changing environments, making it difficult to assign deterministic payoffs that correctly characterize these interactions. These complex, dynamical systems are often modeled and studied via random multi-player multi-strategy games, in which the payoff entries are random variables. 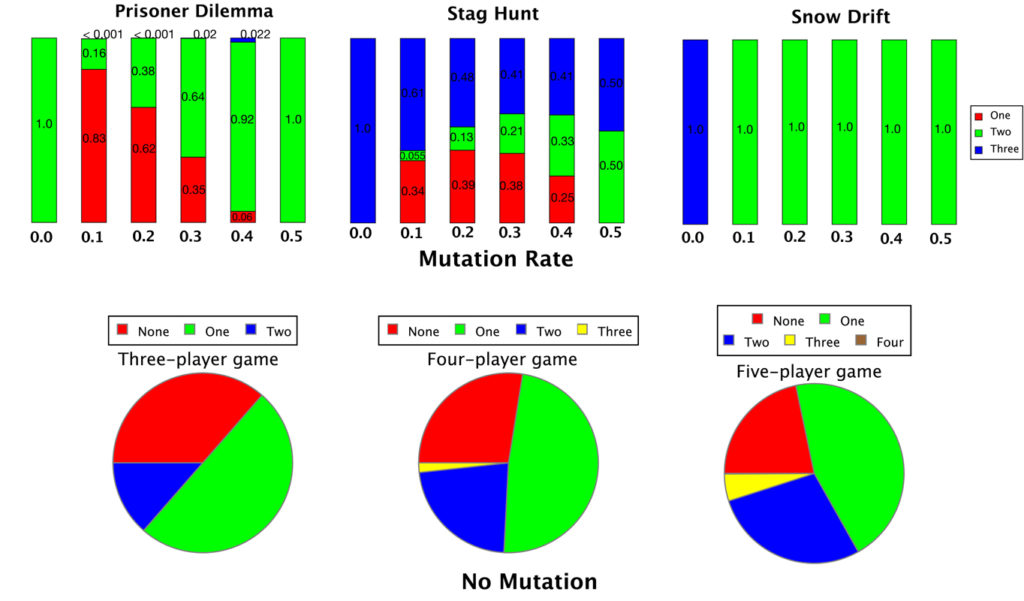 In traditional game theory, Nash equilibrium—named after John Nash, who won the 1994 Nobel Prize in Economics for his work on game theory—is a stable state of a system involving the interaction of different participants, where no participant can make a better choice for themselves if other people keep their strategies. In evolutionary game theory, evolutionarily stable strategy (ESS) is a refinement of the Nash equilibrium: a strategy A is said to be evolutionarily stable if it outperforms any other mutant strategy in a population consisting almost entirely of players playing the strategy A. ESSs provide essential understanding of complexity in a dynamical system, such as its behavioral, cultural or biological diversity and the maintenance of polymorphism. The study of equilibrium points is thus of great importance in evolutionary game theory. This challenging topic has attracted significant attention over the last fifty years.

By developing links to the rich theory of random polynomials, our research characterizes both the average behavior of the number of internal equilibria and the level of complexity or the number of different states of biodiversity that an evolving population might have. Prior methods involve solving a system of polynomial equations, thus are restricted to systems consisting of small numbers of players and/or strategies due to Abel’s impossibility theorem.  Our approach allows overcoming this difficulty, enabling us to study general systems with arbitrarily large numbers of strategies and players. We also reveal the impact of correlation between payoff entries and of the mutation to the number of equilibria hence the level of complexity and biodiversity of the system, see Figure 1.