Brain, the final frontier. These are the voyages of the brain cartographers. Their continuing mission: To explore strange new maps, to seek out new areas and new functions, to BOLD-ly go where no one has gone before.

Making a map is the first step in exploring a new world, whether it be an uncharted territory on the Earth, a new planet in outer space, or the complexly folded brain (Fig. 1). The human brain contains a large set of topologically organized maps, interconnected with neighbor-preserving fiber bundles. These include multiple body representations (somatotopic ‘homunculi’) that sense and control different parts of our body as well as retinotopic maps that represent features of objects at different locations in our visual field. For more than 25 years, researchers have used functional magnetic resonance imaging (fMRI), a noninvasive technique that detects the change in blood oxygen-level dependent (BOLD) brain activity, to examine the organization and functions of these maps.

Fig. 1. An analogy between planetary cartography and surface-based functional brain mapping. Images of Mars were adapted from https://photojournal.jpl.nasa.gov/catalog/PIA02040. Retinotopic maps are displayed on spherical cortical surfaces reconstructed from the left and right hemispheres (LH and RH) of a representative subject. Occ.: Occipital.

In a chapter published in The Parietal Lobe (part of the Handbook of Clinical Neurology), we present a new surface-based functional brain atlas containing visual, somatosensory, multisensory, motor, action, and motion maps constructed from a large set of fMRI studies from our lab. This atlas defines more than 40 retinotopic areas distributed across five visual streams (Fig. 2) — an update on the original division of the visual system into a dorsal “where” pathway and a ventral “what” pathway. Starting at the occipital pole, the frontiers of the five retinotopic visual streams extend anteriorly into the posterior lateral sulcus, superior postcentral sulcus, cingulate sulcus, retrosplenial cortex, and fusiform gyrus. In addition, there is a separated region of retinotopic maps located in premotor and prefrontal cortex. Maps of passive tactile stimulation and voluntary movement of different body parts clarified our picture of primary sensorimotor areas but also uncovered an intriguing new multisensory homunculus — the parietal face and body areas — located at the border between somatosensory and visual maps. 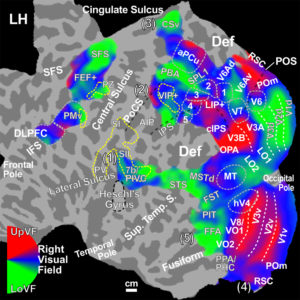 Multiple layers of maps rendered on the same cortical surface—a map overlay method typically used in geographical information systems like “Google Earth”—provide insight into understanding how visual, somatosensory, and motor maps partially overlap each other to support actions such as eye movements, pointing, reaching, grasping, eating, ducking, walking, and navigation in daily life. We expect that the areal and functional definitions in this atlas will be refined and updated by future studies using higher-resolution brain imaging and more sophisticated stimuli and tasks tailored to areas with different specificities.

Our ultimate goal is to construct an online surface-based atlas containing layered maps from different modalities such as topological mapping, myelin density, and diffusion-based architectonics that can be used as a guide map to understand the topological organization, functions, connectivity, and disorders of the human brain. This online atlas will be designed for searching and browsing brain areas and functions via interactive multi-layer features similar to “Google Earth.” These features include gyri/sulci, areal labels, brain functions, anatomical coordinates, fiber tracts, and boundaries of areas (cf. hills/valleys, landmarks, site information, GPS coordinates, roads, and borders on “Google Earth”), and embedded links to publications and figures (i.e., “Google Scholar” and “Google Images”), all on the same interface.