Differentiation of epidermal cells in vertebrates takes place by high production of structural proteins termed keratins that belong to cytoskeletal proteins indicated as Intermediate Filaments (α – keratins). The epidermis of vertebrates is a multilayered epithelium that synthetizes IF-keratins and often forms a dead corneous layer (Fig. 1 A). The prevalent accumulation of keratins in basal and suprabasal layers of the epidermis represents keratinization, the initial process of differentiation of the epidermis of ancient fish and amphibians (Fig. 1 B, C). Only later in vertebrate evolution other epidermal genes and their proteins appeared, especially during the transition to the land, from the Devonian and Carboniferous periods, about 320 million years ago. 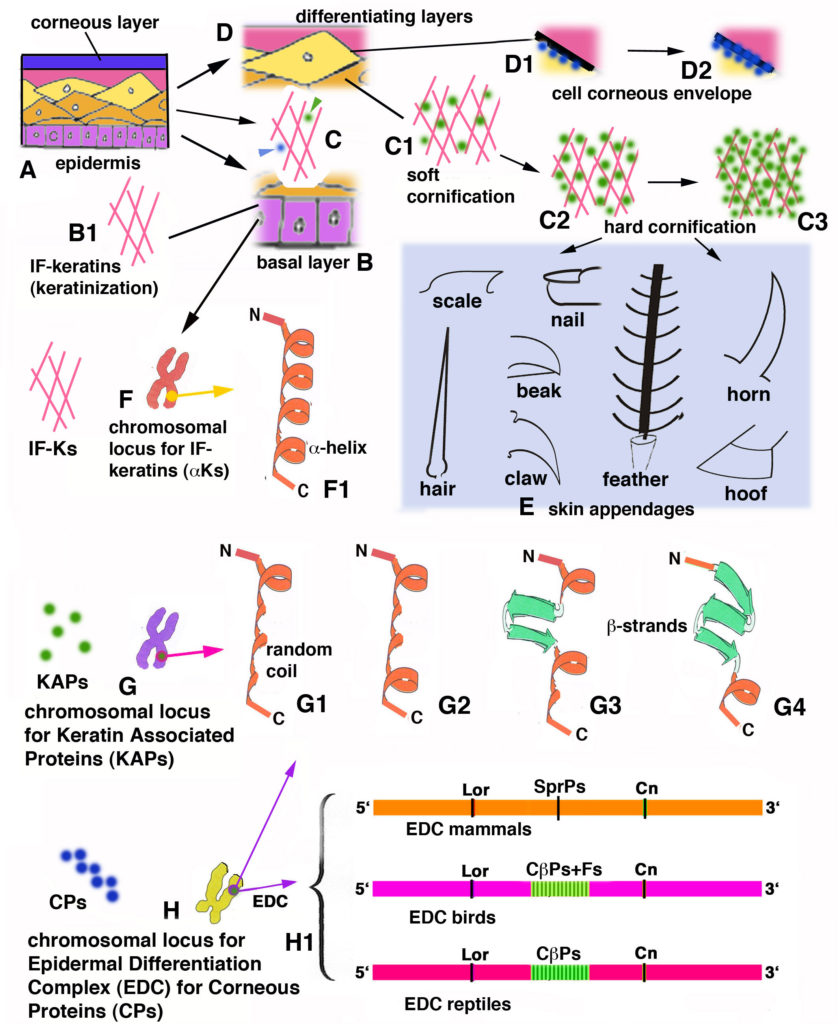 The addition of new proteins in suprabasal layers of the epidermis to the initial meshwork of IF-keratins (Fig. 1 C) determined a process of transformation of the external layers from aquatic (fish and amphibians) to terrestrial vertebrates, sauropsids (reptiles and birds) and mammals. This process still occurs during the transition between embryos and adults of terrestrial vertebrates. When IF-keratins largely prevail on other proteins, like in aquatic vertebrates, a process of keratinization occurs, but when non-keratin proteins increase reaching similar or even higher amount than IF-keratins, this process represents cornification (Fig. 1 C-C3). Non-keratin proteins, are subdivided into two main groups: keratin associated proteins (KAPs) mainly operating in the cytoplasm (Fig. 1 C-C3) and Corneous Proteins (CPs) produced in the cytoplasm of differentiating epidermal cells but mostly accumulating against their plasma membrane that is transformed into a resistant cell corneous envelope (Fig. 1 D-D2). KAPs and CPs form chemical bonds with the meshwork of IF-keratins that determine their bundling or cross-linking, forming softer corneous layers in the epidermis and hard and thick corneous layers in various skin appendages (Fig. 1 E).

IF-keratins, KAPs and CPs have different chromosomal localization and genomic structure, and their genes are present in three independent clusters within chromosomes, suggesting independent evolution (Fig. 1 F-H). IF-keratins contain a central region conformed as alpha-helix and form linear filaments that associate into bundles or a meshwork (Fig. 1 F-F1). KAPs and CPs may have variable conformations, from most random coiled to alpha-helical and some also containing beta-strands (Fig. 1 G-G4). The organization of CP genes in sauropsid and mammalian shows a similar sequence (syntenic genes) in a chromosomal locus indicated as Epidermal Differentiation Complex (EDC, Figs. 1 H-H1, 2).  The EDC contains genes for most epidermal CPs such as loricrin (Lor) and for KAPs such as filaggrin and cornulin (Cn) for the epidermis, and trichohyalin for hairs. The position of numerous genes is similar in reptiles, birds and mammals, but other groups appear to be sauropsid specific and others mammalian specific. Among the CP genes of sauropsids are localized numerous genes (40-130 depending form the species) in the cluster of proteins that were indicated as beta-keratins. For their localization, gene structure and other chemical-physical characteristics these non-keratin proteins are now considered Corneous Beta Proteins (CβPs) unique of sauropsids. Their position within the EDC of mammals is instead occupied by Small Proline Rich Proteins (SprPs) and other characteristic proteins of mammals (Fig. 1 H1). 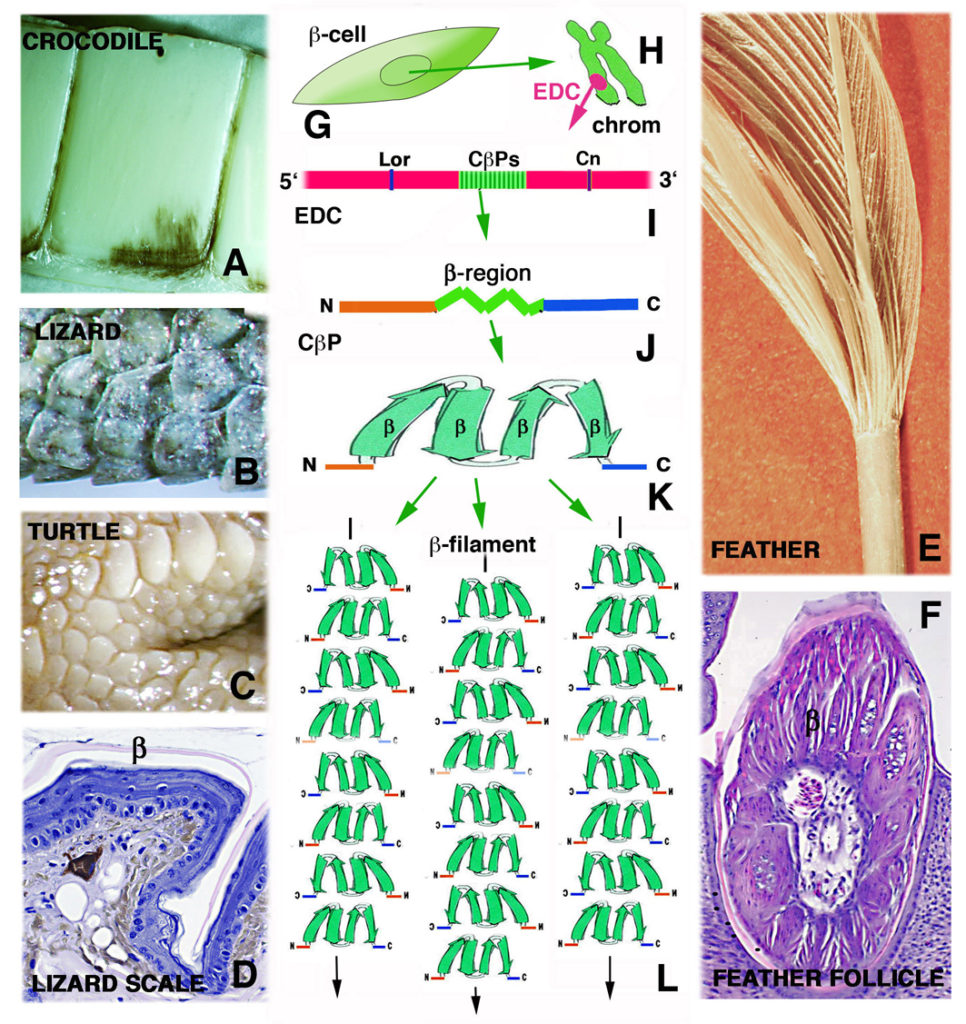 CβPs, synthesized in β-cells and feather barbs, form most of the bulk in the hard corneous material of β-layers in sauropsid scales, claws, beaks, and feathers (Fig. 2 A-G). Sauropsid EDCs contain numerous proteins that uniquely possess a central 32 amino acid region forming 4 anti-parallel β-strands (Fig. 2 H-K). Each CβP is a monomer that polymerizes through the beta-region with other monomers forming growing and parallel β-filaments of 3-4 nm diameter, the base of the hard corneous material forming scales and feathers (Fig. 2 L).

The Process of Cornification Evolved From the Initial Keratinization in the Epidermis and Epidermal Derivatives of Vertebrates: A New Synthesis and the Case of Sauropsids.
Alibardi L
Int Rev Cell Mol Biol. 2016