Coronary artery abnormalities are reported as the third largest cause of sudden death in young athletes. Because patients usually do not have any apparent abnormality on medical examination, it is difficult to detect this before some events. We report a rare case of congenital atresia of the left coronary artery ostium in a teenage boy. 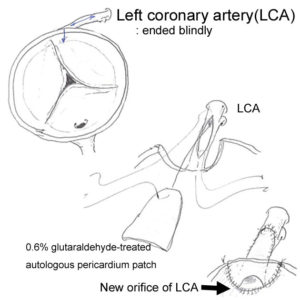 Externally, the left main trunk seems to be connected to the ascending aorta, but there is no communication inside the ascending aorta. The left coronary artery is opened longitudinally. The posterior wall of the left coronary artery was directly connected to the aorta. The anterior wall is covered using a patch of 0.6% glutaraldehyde-treated autologous pericardium.

The patient was 13 years old, and he played volleyball for his school. There was no relevant family history. He had been healthy, except for two episodes of partial loss of consciousness during running and swimming when he was 11 years old. He collapsed with severe chest pain and palpitations during volleyball practice. His symptoms disappeared once after resting. Medical checkup including 12-lead electrocardiogram could not find any life-threatening signs. Two weeks later, he visited hospital with the same symptoms and referred to us for further investigation.

Surgical findings are shown in the Figure. We found no communication between the left coronary artery and the aorta from inside the aorta. We opened the left coronary artery longitudinally from the proximal end until we reached the intact lumen. We directly connected the posterior wall of the coronary artery with the aortic wall. And we reconstruct the anterior wall using a pericardial patch treated by 0.6% gultaraldehyde solution. He has been leading a normal life, without chest pain or other symptoms eight months after the operation.

Physicians should be aware of the patient’s history, and proceed to prompt imaging studies in patients who present with chest symptoms during exercise which are suggestive of myocardial ischemia.